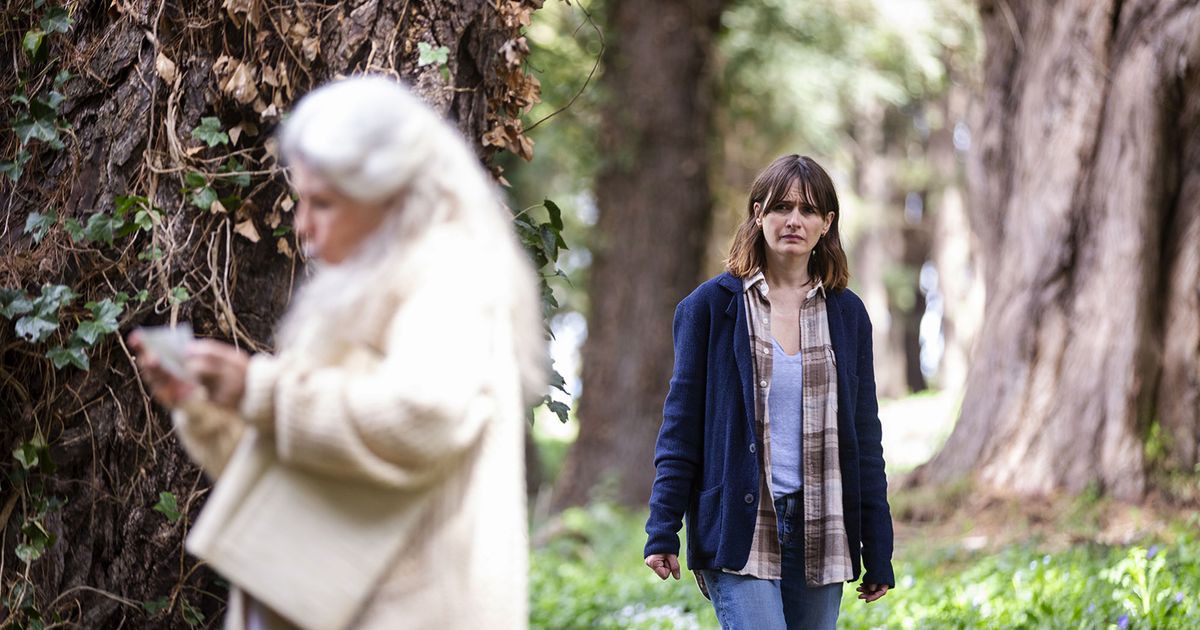 Relic Review – The Eternal Horror of the Ceasing Mind

A mouldy, weathered house sits dormant on the outskirts of a remote town. The air inside is growing stagnant, possibly pungent with the stench of rotting fruit, as its sole occupant, Edna (Robyn Nevin), has been missing for days. Post-it notes cover important items, with reminders for the writer to take their pills, or to ‘not follow it’. It’s clear Edna has found great difficulty with maintaining general housework within the abode, with the notes suggesting a haphazard attempt at restoring some kind of order.

After receiving a call that her mother has gone missing, Kay (Emily Mortimer), and her daughter, Sam (Bella Heathcote), arrive to try and find where Edna has disappeared to. The distanced relationship that Kay has with Edna means that communication has been dry, and Kay’s awareness of her mothers dissipating mental state has been limited. Employing the help of the local police and community, Kay and Sam scour the countryside to try and find Edna, with no joy.

To talk about this film in the most honorific way possible, one must delve into spoiler territory to explore the themes of the film intimately. As April Wolfe of the great podcast Switchblade Sisters says, it’s not what happens, but how it happens. However, if you’re spoiler-averse, then please know that this downright essential film is currently available to watch on Stan. in Australia, and most on demand services around the rest of the world. It stands as one of the finest films of 2020, easily positing itself next to The Babadook as one of the most masterful horror debuts in Australian history. Watch it.

Natalie Erika James first feature film, co-written with Christian White, is an atmospheric tangible horror film that swaps monsters and ghouls for a grander, more grounded and humane kind of fear: the loss of ones mind to the unseen beast that is dementia.

That’s not to say there aren’t atmospheric bumps in the night and creaks on the boards, with Edna’s house being a reflective vessel for her transforming and degrading mind. Upon arrival, Sam notices and reacts to perceptively supernatural events that disturb the silent night air, yet as Relic unfurls, we find that the unexplained nature of these moments have a true meaning and purpose. Closets have hidden doors and rooms squirreled away behind musty clothes.

One morning, as Kay sleeps a disturbed sleep on the living room couch, Edna appears again, making herself a hot drink, and acting like nothing has happened. There’s clearly something not quite right, and Kay organises a doctor to assess her mother, who advises that bed rest and care is in order, while also commenting about a peculiar bruise on Edna’s chest.

The presence of horrifying black mould upon artwork, ceilings, and doors, hints at something that might be able to be eradicated, or removed by cleaning or renovation, but Kay and Sam never try to fix that mould, instead, accepting its presence and addressing the immediate problem: care and support for Edna.

Just like Jennifer Kent’s masterwork, The Babadook, Natalie Erika James is more interested in the horrors of the mind. This is not to say that there is anything outwardly horrific about depression, PTSD, or dementia, but rather that the way mental illness or ailments of the mind can present in people can be unexpected and frightening to those who care and love for them. In some ways, calling films like The Babadook or Relic horror films feels dismissive of their narratives and the themes they explore.

At a glance, these films purport to be monster fables, stories about a family working to conquer or vanquish a beast and return to some kind of normalcy, but in actuality, they’re both far from that way. Yet, remove them from the genre wheelhouse, and they become mere dramas, ignored or forgotten by the masses for their domesticity. To call Relic, Still Alice or Away From Her with jump scares feels reductive, but simplicity to getting a point across is key, and that’s a suitable tagline that helps distil what James is working with here.


And that is a respectful and considerate depiction of a family dealing with the presence of dementia in their lives. Relic is a film full of short hand moments that create a deep character history that simply drips off the screen. Kay is tied to her work, with the distance between her and Edna being part of the reason for their muted relationship. In a moment where Kay is squeezing a days work into five minutes in between house care and support, we see how strained Kay is from an inept male colleague who is technically skilled enough to maintain the workload she’s left them as she goes to care for Edna.

For Sam, a momentary line addressing Kay’s concern about her work immediately paints a deep picture about the transitionary moment that Sam is facing in her life. With a job she didn’t like behind her, and a questionable future ahead of her, the notion of staying in the country to help Edna maintain her house and support her comes into her mind.

The three main performances from Mortimer, Nevin, and Heathcote, are exemplary. This is a stunning trio of performances that never feel like you’re seeing three actresses play out a script, but rather giving you the impression that we’re privy to three generations of women faced with a relatable problem.

Within Australia, more than 400,000 people live with dementia, with the illness being the single greatest cause of disability in Australians over 65 years of age. For me, I’m all too aware of the familial strain that dementia causes, and the confusion and anger that the person living with dementia goes through, with my Grandfather currently living with the illness. The post-it notes, the musty air, the misplaced furniture, the middle-distance stare; all felt deeply familiar to me.

As Relic honoured the family journey completely, I found myself being moved in a way I didn’t expect. Natalie Erika James direction is profoundly empathetic, carrying a delicate care and consideration for Edna, Kay, and Sam.

For a moment, I was terrified that Relic would manoeuvre itself out of the gentle and caring narrative it was weaving, and have Edna be ‘saved’ from whatever was stealing her mind away, or to have her overwhelmed by the dementia, turning into a beast or demon that only deserved death. And sure, the discussion many people have about dying or growing old is that they aren’t afraid of the organic machinations of ageing, but they simply don’t want to become a shell of their prior selves.

Relic presents this evolution away from a cognisant mind as being a mournful event, but never a pitiful one, with one of the most deeply moving moments I’ve witnessed in a horror film taking place. As Edna’s journey continues, her body starts to become afflicted with the same black mould that lines her home. It eventually tears away and corrupts her skin, causing it to peel like a rotten fruit, unveiling tar black skin underneath. Kay notices this, and instead of exhibiting repulsion, she considerately eases Edna’s old skin off her, comfortably allowing the ‘new’ Edna to exist. As Kay supports and comforts her mother, Sam moves in to equally support and comfort her mother, and doing so, notices the same black mould on Kay’s back that has plagued Edna.

It’s worthwhile noting that genetic dementia is a rarity, but one reading of Relic’s conclusion could be that it is instead suggesting that the ageing process, and the need for familial support and palliative care, is what infects us all, not dementia. As children of our parents, we inevitably inherit the need to care and support and palliatively guide our parents through to the final journey into death. This is not always true, of course, with other circumstances influencing these life patterns, but it is one that does apply to many around the world. It may sound morbid, but it is a reality that many of us neglect to recognise, often until it is too late.

This is why a film like Relic feels outside of the realm of the genre wheelhouse that is ‘horror’. It most certainly is a horror film, but it is directed and guided with such delicate empathy that it feels more like a mournful ode to the pains of life and ageing than a fear-inducing, nightmare creating entity that has us worried about losing our mind.

I can’t help but think of the celebrated work of Ari Aster: Hereditary and Midsommar. These are films that are so meticulously detailed with their production design, so theatrical in their histrionics that they seek out heightened performances rather than lived in character experiences, and yet, they so earnestly manipulative with their narratives, often feeling like an upset stomach of thematic digestion, rather than a dive into the human experience. I do enjoy these films, and find Aster’s work a curious endless gobstopper of a horror film, revealing a new taste each minute, but they often feel like they’re doing the subject of mental illness or ailments of the mind a disservice.

I want to stress, I’m not putting Relic and The Babadook in opposition to those films, but rather, to highlight the way that both Natalie Erika James and Jennifer Kent have devout empathy for their characters and the ‘monsters’ that they are faced with. ‘Monsters’ that are grounded in reality and real life, as opposed to intergenerational curses. It’s here that I want to highlight the power and brilliance of giving underrepresented voices the chance to explore and tell their stories on film. My apprehension that this would be a rote and routine monster flick comes from generations of rote and routine monster flicks directed by men. But, within Australia, there’s a revival taking place, with a new kind of horror film emerging, one that is transforming the genre in a way that it desperately needs: the horror of the mind, and the desperate need for the empathy for the demons it conjures.

This is a masterful film, a transformative work that immediately puts James on the same pedestal as other grand and great Australian directors. Desperately essential viewing, powerful in its styling (I haven’t even mentioned the stunning production design here), and moving beyond expectation in its finale. Relic is, quite simply, one of the finest films of the year, and establishes a talent that will keep us wowed over the next decade.

Bring on the filmography of Natalie Erika James. 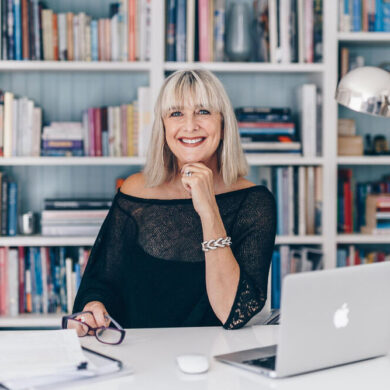