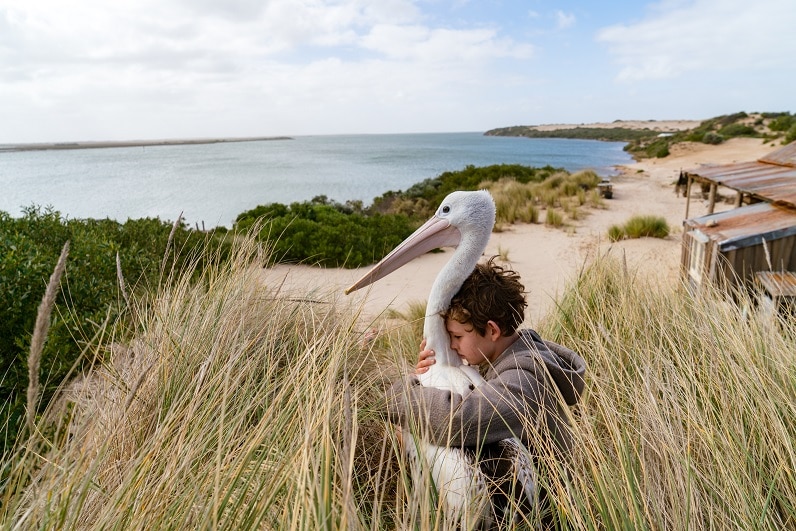 This review will contain spoilers.

In the year 2019, Colin Thiele’s classic novella, Storm Boy, will be celebrating its 55th anniversary. To honour this momentous occasion, there has been a video game released, as well as a remake/re-adaptation of Henri Safran’s AFI Award winning film of the same name. Landing with all the grand fanfare and pomp that an adaptation of a celebrated book and film comes with, director Shawn Seet’s version employs big name stars like Jai Courtney and Geoffrey Rush to act as set dressing for the stars of the show – three pelicans.

A quick rundown of the plot of Storm Boy: grieving father ‘Hideaway’ Tom (Courtney) takes his son, Mike aka Storm Boy (Finn Little), off to a remote beach to raise him. While there, Storm Boy becomes friends with Fingerbone Bill (Trevor Jamieson). As Fingerbone Bill and Storm Boy are wandering the dunes one day, they hear the shots of hunters, and not too long afterwards, discover three orphaned pelican chicks. Storm Boy decides to raise them, giving them the names Mr Proud, Mr Ponder, and Mr Percival.

Meanwhile, because a straight adaptation would be too easy, writer Justin Monjo throws in a present-day set narrative featuring an older Storm Boy, played with accentuated agedness and gruffness by Geoffrey Rush. Mike is now a retired businessman who lives a pretty comfy life, except for the fact that he still has to vote on the board of a company he’s associated with. For some reason, the company wants to establish a mine in the Pilbara, and for Mike’s son-in-law, Malcolm (Erik Thomson), this is the culmination of years of dealing and bargaining. For Mike’s granddaughter, Madeline (Morgana Davies), it’s a slap in the face and goes against everything she wants for her future.

This shoe-horned extraneous framing device exists to contemporise an already relatable core narrative. Oh, and to also have Grandpa Storm Boy call up a helicopter and fly himself and Madeline off to some beach so he can put his feet in the sand and talk about some pelicans he knew way back when. While the A-plot still carries an emotional punch (mostly thanks to the pelicans), it does so while in combat with a decidedly empty and extremely contradictory manufactured B-plot. The life of decadence that Mike has exists to show how far he’s come from his humble beginnings growing up on a beach in the middle of nowhere, but instead it plays like an ode to pompous white businessmen.

Actually, it’s worse than that. For the most part, it carries on like a bizarre advertisement for Lolly Gobble Bliss Bombs, which Mike states ‘could only be bought in Singapore’, which is clearest indication that he’s a wilfully ignorant successful businessman, given that if he took a brief stroll down the chips aisle at Woolworth’s, he’d find bags of the darn things. Most obnoxiously is the way that a climactic business deal is thwarted because two of the older board members remember how nice nostalgia is when delivered in food form, rather than them actually caring about the indigenous land that the mine would be established on. The mere fact that a business deal is utilised for the climax of a film that’s clearly about nature is a sure sign that both writer Justin Monjo and director Shawn Seet are greatly out of touch with their source material.

Which is a real shame given the quality of Colin Thiele’s book, and the darkly hopeful tone within Henri Safran’s film. After all, this is a story that’s about grief, and what it means to live a life in solitude as you process your emotions. Tom is so heavily weighed down by the grief he carries that he has no idea of the harm that it may bring to his son.

But, if this version didn’t explicitly state that Hideaway Tom (named as such due to his reclusiveness) had made off to the beach because he was grieving, one could be mistaken for thinking that Jai Courtney was actually just a leftover extra from that one episode of Australia’s Next Top Model where they went to Kangaroo Island. He’s so photogenic, so perfectly groomed to imply that he’s mildly dishevelled, that he instead looks like he’s stepped out of a Rivers catalogue. Look, I’m not one to complain about Jai Courtney’s acting (he’s great in Felony), but he’s clearly miscast here, given little to do other than fish, pout, fish some more, and then drive a boat. When he does show a glimmer of acting ability, he’s betrayed by nostalgia framed flashback scenes which show his soon-to-be-dead wife and daughter driving away jovially. These do little to add to the implied trauma that Tom is experiencing, and instead come across as a cinematic ‘no big deal’ shrug.

Which then means that the emotional weight of Storm Boy falls onto the shoulders of Fingerbone Bill, the pelicans, and Storm Boy himself. Now, Trevor Jamieson is the MVP here, mining the emotional echoes leftover from the masterful David Gulpilil from the original version, and creating a beautiful character for Finn Little’s Storm Boy to bounce off. Finn is Finn, carrying the torch of Aussie child actors giving the best (picking up from Levi Miller and Ed Oxenbould), he’s required to do little more than play with pelicans, while every so often manipulating the audience by accentuating his big bottom lip as he cries.

Expectedly, the pelicans are exemplary, conjuring the majority of the emotional impact that the film so eagerly wants and needs. The bond that Storm Boy has with Mr Proud, Mr Ponder, and Mr Percival is tangible. Which is why Alan John’s exuberant and energetic score belies the narrative playing out on screen, robbing sad moments from their energy, and instead making them feel disturbingly close to a pantomime. Most disturbingly, the climactic death of Mr Percival (which comes right alongside that aforementioned business-deal climax) is dragged out to an unnecessarily brutal conclusion. After being shot out of the sky and tumbling to the ground, Mr Percival’s death drags on for an age, taking hours for him to pass. There’s an underlying feeling of cruelty directed to the character of Mr Percival, as both Hideaway Tom and Fingerbone Bill (you know, the two adults in this situation) sit by and let the poor bird bleed to death instead of helping it in any way.

The Dressmaker Review – One of the Most Iconic, Defining Entries in the Australian Film Pantheon

Mr Percival quickly becomes Australia’s Cecil the Lion, with his rise to celebrity status in the community amplifying the repercussions of his needless death, and in turn, bringing about a hunting ban in the region. It’s supposed to be the one takeaway message from the narrative, but instead it’s muddled in with a watered down anti-mining message that is supposed to supplant the anti-hunting message of the original film. Whether the impacts of hunting in Australia have greatly decreased since the 1976 version or not appears to be beside the point, as the key takeaway from this version is not that hunting is bad (the wealth of dead pelicans amplifies this fact), or that mining is bad, but instead that you can’t change the past. Regardless of what happens, Mr Percival will always die, it’s just up to us how we reflect on his legacy.

Which is a good way of saying, if this 2019 version of Storm Boy, and the 2018 game created by Blowfish Studios, is supposed to honour the legacy of Colin Thiele’s text, then one has to wonder whose dog Thiele ran over first. Yes, that’s a reductive, harmful way of throwing salt in the eyes of hard working people, but given the easy home run that this could have been, one can’t help but wonder how todays youthful generation will recall Storm Boy when they’re grown up. After all, I hear that there’s nothing more exciting for kids than business deals and drawn out pelican deaths.

A short aside on the 2018 game: this is a visually impressive game that is disturbingly absent of engaging gameplay. I managed to complete the entire game in fifteen minutes, finding the mini-games that litter the watered down narrative to be bland and uneventful. Sure, there’s a small amount of joy that can be gleaned from flying around as an ibis or as a pelican, but it’s clear that this game merely exists to remind people that it’s the 55th anniversary of a book.