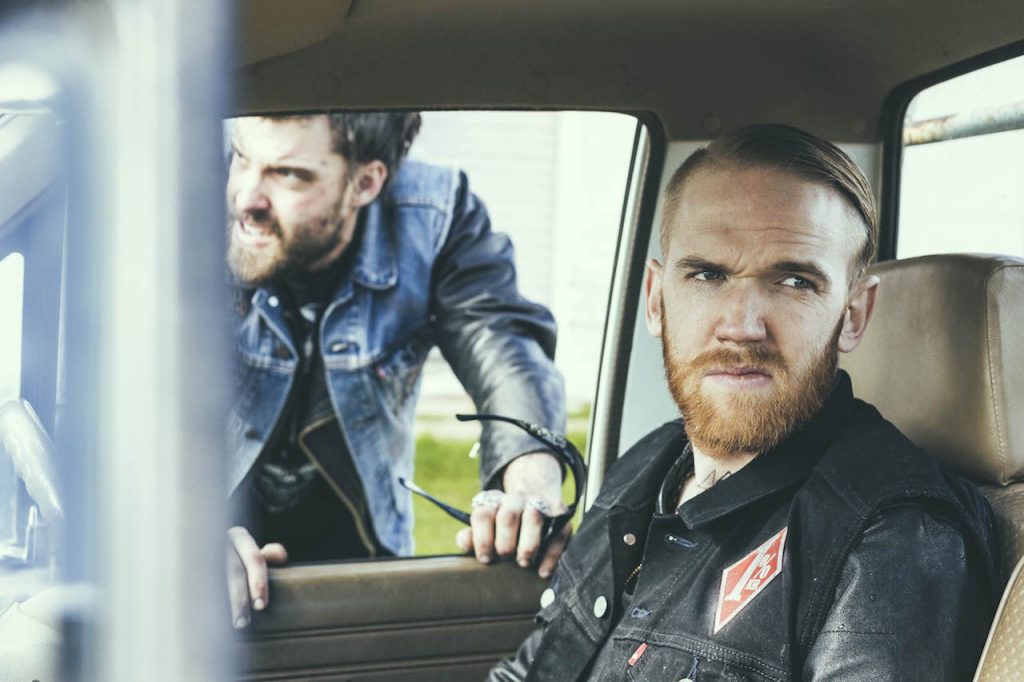 Watch the Sunset opens with a variety of news footage related to drug related crimes and issues. The film that follows is a one shot eighty minute journey through the town of Kerang, Victoria. Working as the feature film debut for the Jack of all trades team that includes (deep breath) co-director/co-writer/actor/co-producer Tristan Barr, co-director/co-writer/actor/co-producer Michael Godsen, cinematographer/producer Damien Lipp, Watch the Sunset is a powerful, immersive slice of work.

The core plot for this redemptive tale has Danny (Tristan Barr) returning to a town he once left to be reunited with his ex-partner Sally (Chelsea Zeller – also holding dual duties as a co-writer) and his daughter. He arrives encumbered with a woman who he has essentially ‘stolen’ (rescued) from a bikie drug den. Our imaginations are left to fill in the gaps of the terrible things that may have happened to her as she lays in the back seat of the car bruised in her underwear. Before too long, Danny is tracked down by his ex-bikie pals who are keen to seek redemption from Danny’s apparent abandonment of them.

One shot films can feel a little gimmicky. Russian Ark was a technical achievement that felt empty, whereas Victoria felt exhaustive and tiring with its two hour twenty minute runtime. The team behind Watch the Sunset have implemented the technique of a one shot film to reinforce the themes within the film. While the narrative would still be effective if it were shot as a traditional film, the one shot aspect helps reinforce the quiet, small country town theme that runs throughout Watch the Sunset.

Australian cinema is full of crime stories, almost to the point that there is an unconscious tendency to lionise the criminals within the pieces. In the late nineties through to the early 2000’s, there was a trend to celebrate the ultra-ocker, uber-blokey crime figures within films like Two Hands, Chopper, and Dirty Deeds. Finally, the Aussie crime genre reached a pinnacle with the Underbelly series, which in turn transformed real life court trials into tabloid fodder. The focus of most of these stories seemed more focused on the thugs and crims themselves than the people affected by the drugs that they willingly push to fund their criminal lifestyle. Watch the Sunset takes the crime genre and directly puts us in the mind space of someone who is recovering from drugs and wanting to create a better life for themselves. There is a conscious effort to humanise those who are stigmatised within media and politics.

After the introductory news footage, we spend a few minutes with Danny as he’s driving back in to town. This protracted time with Danny allows us to become accustomed to the quiet mood within the town. The streets of which are mostly devoid of life. A playground that Danny’s daughter moves through is completely vacant. An early moment with a church choir has the sound sucked out of the scene – these are voiceless people singing a silent song into a dark church. It becomes apparent through this quiet, almost lifeless town, how drug pushing gangs would thrive. Where boredom may breed creativity, it can also foster darker forces who through peer pressure and coercion can find ways to imbed their tendrils and control people.

It’s at the church choir that we see Sally trying to find her place in a world that she almost doesn’t belong in. The other singers appear to be mostly elderly, a sign that many of the younger citizens within the town have long left both religion and the town behind in search of a better life. Sally has long moved on from her drug embellished life in search of a better future for herself and her daughter. No matter how deep the ties with a person or a town may be, it is sometimes necessary to break that connection for the better of ones self, and it’s evident that Sally would do anything for her daughter. Mid-song, she notices that Danny has slipped in to come whisk her away, and the memories of a traumatic past immediately come flooding back.

Unfortunately for both Sally and Danny, Shane (Aaron Walton) and Russell (Michael Gosden) are on their trail and seeking the retribution that they believe Danny deserves. Shane believes in honour and mateship, and Danny’s abandonment and decision to break free of living a drug-related life works in contrast to Shane’s world view. He is the hero in his own story and sees no troubles in bringing them back in line, no matter what level of violence and terror that means.

Even though we are not given a thorough back story for these characters, through solid performances from the three main leads (Barr, Zeller and Walton) we get a powerful understanding of who they are as individuals. Small touches add a powerful background as to what life in this small country town is like. A scene where Danny and Sally’s daughter, Joey (Annabelle Williamson), plays in a playground by herself while her parents argue in a car is given a deeper emotional thread when we see her shooting an imaginary gun against imaginary thugs. We learn about a life a child lives from how they play, and through Joey’s play-style we get a grand look at the world she has grown up within. It’s sobering and heartbreaking. We immediately want the best for both Sally and Joey, and are purely invested in their fates going forward.

Watch the Sunset is technically a brilliant film – a high-speed shot and the closing sequence stand out as truly impressive moments. (I would be remiss to not mention the great score by Richard Labrooy as well.) However, the film would be lesser if it were simply just a technical achievement, and it’s thanks to great directing, acting and writing that it is elevated above its one-shot aspect. Watch the Sunset is a great feature debut, providing a great announcement of a group of great Australian talent that will no doubt provide immersive, challenging cinema going forward.