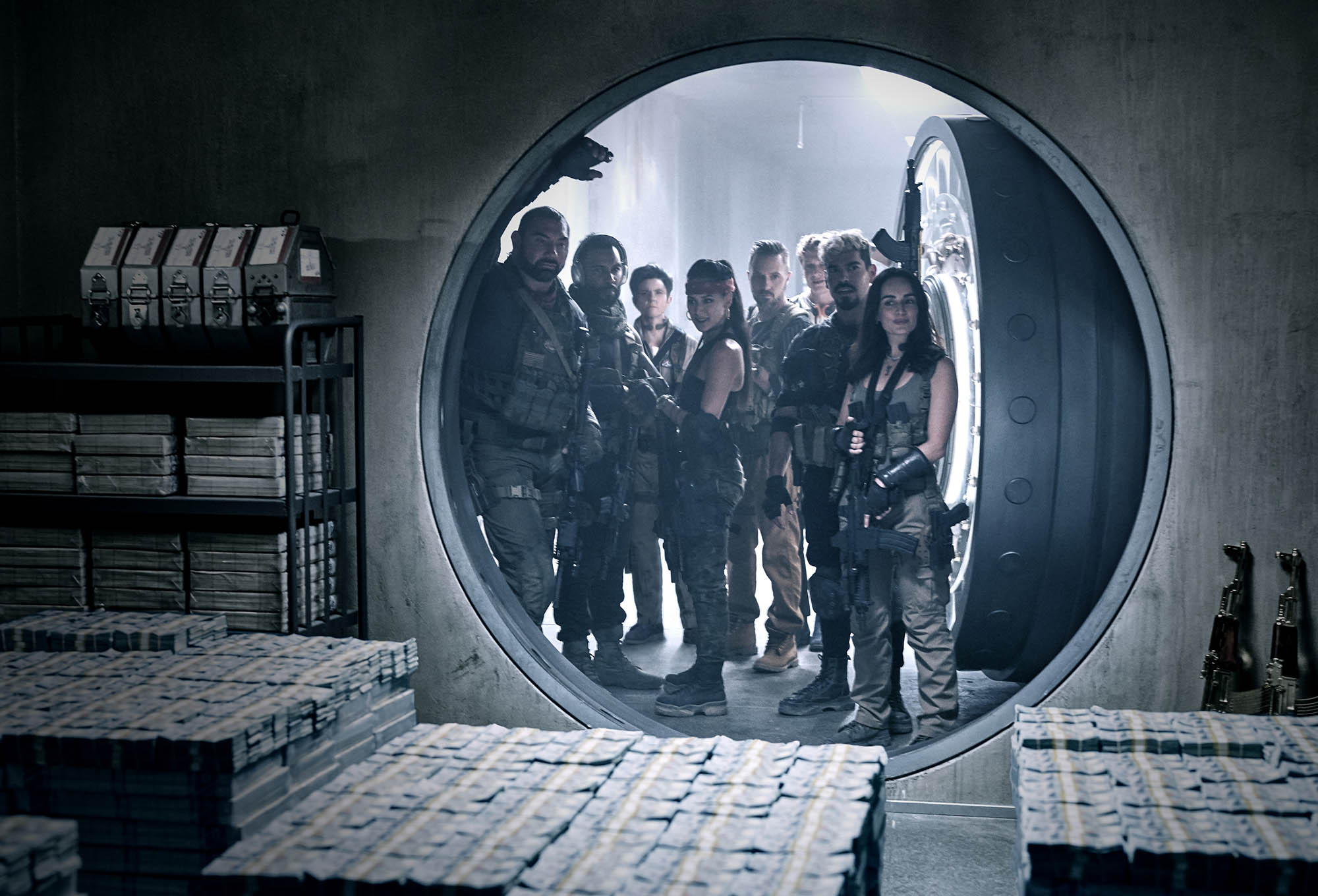 Army of the Dead Review – Just Another Zack Snyder Film, For Better and Worse


Two Zack Snyder movies in one year? Can the internet handle cinema at that magnitude? I speak ironically of course as, if you read my excessive Zack Snyder’s Justice League review, Snyder isn’t my favourite filmmaker. I’ve seen all of his films at least twice and have come out of each mixed and indifferent. He’s just not my thing. Still, I held out hope that Army of the Dead could be something completely different that I could enjoy as much as his most fervent fans. It wasn’t.

Army of the Dead is not a proto-sequel to Snyder’s first film, the 2004 remake of Dawn of the Dead, as this is a brand new zombie world. The outbreak happens because of a mysterious government test subject breaking loose on Las Vegas, with its plague ravaging through the city. Dave Bautista’s Scott Ward and his mercenary zombie killing team Las Vengeance fight to keep the horde at bay, the city gets walled off and the rest of the world moves on, free from harm. Several years pass, and Scott is recruited by Mr. Tanaka (Hiroyuki Sanada) to retrieve hundreds of millions of dollars from a safe in the belly of Tanaka’s Olympus Casino before the entire area is nuked by the U.S. government. Scott reunites his team together, along with a few shady newcomers, but also has to reconcile with distant daughter Kate (Ella Purnell) who has a personal stake in the infiltration and quick extraction from the zombified city of Las Vegas.

I like that instead of the standard “whole world is infested with zombies” thing, the threat is contained in one area, causing a strange evolution for the creatures inside. Once the team enters the city, guided by the Coyote (Nora Arnezeder), they discover something resembling primitive social order, with “Alphas” leading the regular “shamblers”, as well as a terrifying zombie tiger named Valentine.

I rewatched Dawn of the Dead before Army and when you go from Snyder’s first film to his very latest, both in the same sub-genre of horror, you see an interesting progression of a director. Dawn has the Snyder trademarks (slow-mo, confronting violence, unconventional casting) but is rich in colour and more reserved in its themes. It’s the downfall of the film that nothing really means anything and the characters seem hollow compared to the Romero original, and Army is almost everything that Dawn isn’t.

In Army, Snyder puts greater importance on his characters over the plot’s progression which is admirable, but it springs up in all the wrong places. We’ll have a steady and even pace of events, and then suddenly characters will stop and have a serious heart-to-heart, complete with sad and important music from Tom Holkenborg. It’s like Snyder heard the criticisms of Dawn that there were too many characters and we didn’t care much for them in the end, and fixed only one of those problems and still made an unbalanced movie. These characters are so full of meaning and purpose that they’ll stop the movie dead multiple times to confess their deep-seeded feelings or muse about the philosophical nature of purpose and death, and it’s just too much. And there’s still too many of these people.

Bautista’s Ward is the protagonist, his daughter Kate is his emotional crux, Ward’s team members Maria (Ana de la Reguera), Vanderohe (Omari Hardwick) and Peters (Tig Notaro) all have specific purposes for the mission, the Coyote knows the way through Vegas, safe cracker Dieter (Matthias Schweighöfer) is the key to everything, and Martin (Garret Dillahunt) is the antagonistic eyes-and-ears of the team’s benefactor. And then there’s two nobodies (Raúl Castillo, Samantha Win) who are only there to die and nothing more. I wonder who Snyder could’ve cut from the script and saved this movie about 10 minutes.

Army of the Dead’s fatal flaw is that it’s a rock-solid 90-minute zombie action-thriller that’s terribly stuck inside a 148-minute meandering trudge that struggles for its own identity. Heist movies have worked in the past because they focus on the fun of being able to steal a lot of money from the 1%, and most zombie flicks embrace how awesome it is to kill legions of the undead, sometimes with nothing but vinyl records. Mix the two up and you should have a delirious load of fun, but that seems too hard for Snyder.

The opening credits deliver wordless sequences of insane action that sets up how Vegas was overrun with the undead as well as main character backstories and motivations, and the movie continues to thrill you with setting up a heist that should be a total blast to watch. But as soon as they enter Vegas to complete the mission, the movie somehow hits a screeching halt. Now they have to make a sacrifice to the “zombie King and Queen”, get a generator up and running, fix a helicopter, and trip a bunch of ridiculous booby traps surrounding the vault which strains all logic to breaking point.

Just when everything seems to be gearing up to a fun finale of defeating all the zombies while time runs rapidly out, it meanders on and on, overwhelming you with generic action that feels like watching your friends play 20 rounds of Call of Duty: Zombies but you’re not allowed to play.

What’s worse is that Snyder is typically a great director with framing and lighting practical action. But Army is the first Snyder film where he acts as his own cinematographer and uses the frustrating shallow focus filming of Justice League’s reshot “Epilogue” sequence for the whole movie. It’s a narrow and exhausting technique that mostly doesn’t work beyond tiring your eyes.

I enjoyed Bautista’s performance and his command of the movie in a central role, Matthias Schweighöfer is an enjoyable standout, and Snyder’s CG insertion of Tig Notaro is commendable even if it’s still quite noticeable. Several moments of gore were quite spectacular and shocking, the zombie tiger Valentine gets to maul someone to death and it’s glorious and the movie isn’t impossible to watch. It’s a perfectly fine genre mash-up that doesn’t give you anything spectacularly different.

Except for one thing.

In the battles with zombies, you might notice (one slow-mo shot in particular) that some of the undead are really. Did you just miss something? You didn’t, as their purpose is to be explored in the animated prequel series coming soon to Netflix. Snyder throws in a rather large plot twist that we’ve never seen before with zombies then says “you’ll have to find out later”. It isn’t the unexplained nature of this development, it’s that the reveal comes in the middle of the climax, none of the characters notice or mention it, and the rest of the movie proceeds unchanged. If you want to set up a secret truth about robot zombies, then throw it in at the end as a post-credits sequence. It’s a sloppy reveal that left me terribly frustrated.

Black Widow Review – MCU’s Latest is Worth the Wait

Army of the Dead does still have a deeper meaning. Just like the very nature of the existence of Zack Snyder’s Justice League, Snyder is reconciling with his daughter Autumn’s passing. Here, the story focuses on a distant father coming to terms with how disconnected he and his daughter are, and he ultimately does everything possible to protect her. Snyder is delivering a heartfelt theme about fatherhood and love that rings deep to his personal life, and yet I couldn’t help but feel how THIS theme in a zombie film was already perfected to emotionally devastating proportions by Train to Busan.

I came away from Army of the Dead mostly ambivalent. The cinematography at best is functional and at worst is unintelligible, the soundtrack is filled with odd and clunky choices, characters are two-dimensional stereotypes, dialogue is stock-standard except for strange pointless tangents, and the action never stood out as anything amazing. It renders not as a unique evolution of zombies in film but a rote mix-and-mash of the emotional crux of Train to Busan, the basic premise of its sequel Peninsula, and striking similarities to Aliens (the climax even has a fake “they left us behind” moment).

If Snyder has found a new home of creative freedom with Netflix, great. Let him make all the weird and meandering movies that I don’t enjoy for as long as he wants, because I prefer Snyder doing this than suffering under Warner Bros. and DC. Leave me out of it. Army of the Dead isn’t something I’ll go back to, but you can enjoy it all you want, which is exactly how I feel about all his movies. I guess nothing changes.