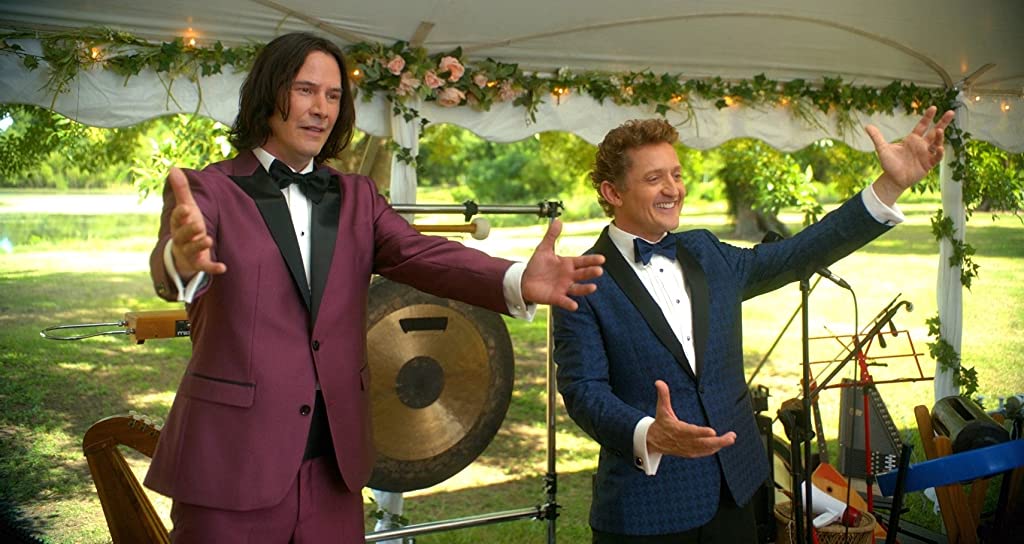 Every so often, two similar films arrive in the same calendar year. In 1997, Dante’s Peak and Volcano erupted onto screens. In 1998 there were triple bill double ups with Armageddon and Deep Impact seeking to end the world with comets, WW2 roaring on with Saving Private Ryan and The Thin Red Line, and animated bugs getting their day in the spotlight with Antz and A Bug’s Life. More recently there’s been No Strings Attached and Friends With Benefits, and Olympus Has Fallen and White House Down.

It seems fortuitous then that in the year 2020, we have Tenet and Bill & Ted Face the Music:  two time travelling flicks about the end of the world and the men who have to stop it from happening, both of which are destined to save cinemas. One is a cacophonic mess of a film, the other is an absolute delight that’ll leave you with that dopamine boost you’ve been looking for in the back of your cupboard.

Twenty nine years after the last Bill & Ted film, Bill & Ted’s Bogus Journey, the radical duo are back to face the future they so desperately tried to make a reality. In the previous films, fate was dictated that Bill (Alex Winter) and Ted (Keanu Reeves) and their Princess wives from the past, Elizabeth (Erinn Hayes) and Joanna (Jayma Mays), would create a song that would bring the universe together and save everyone from imminent destruction. Now in their middle-age, the two dads are still trying as hard as they can to make the perfect song that will save humanity and the universe as they know it.

Their fan-like daughters Thea (Samara Weaving) and Billie (Brigette Lundy-Paine) see their fathers plight on the line and with the assistance of time travelling Kelly’s (Kristen Schaal) transportation egg device, they embark on a journey across time to bring together the most excellent band that’s ever existed. Excitement ensues.

The absolute charm that drips from each frame of Bill & Ted Face the Music is positively grin inducing. Alex Winter and Keanu Reeves pick up with the same iconic characters that they forged on celluloid decades ago as if they’ve been living and breathing in San Dimas, California, all this time. So effortless is their dude-like casual charm that you can’t help but slip right into their groove.

Matching their pace completely are the equally bodacious performances from Samara Weaving and Brigette Lundy-Paine as mirror images of their fathers. With a script from creators Chris Matheson and Ed Solomon, and confident direction from Dean Parisot, Weaving and Lundy-Paine are in safe hands with the superb material they’re given to work with. It’s clear they’re both having the time of their lives imitating Winter and Reeves, and bringing their own stylish touches to the Bill and Ted legacy.

Thea and Billie’s narrative is not the B-plot to Bill & Ted’s A-plot. Instead, there’s really no B-plot at all, with the two time travelling duos operating concurrently in a bid to make this song the best that ever could be. As with previous Bill & Ted efforts, the charm of the films comes from the various historical figures they encounter, and what kind of mishaps and hijinks these figures get up to. While there’s less for the catalogued band mates to do, they are still quietly entertaining in their own ways.

Elsewhere, there are charming turns from Anthony Carrigan as a bounty hunter robot, Jillian Bell as a marriage counseller, Holland Taylor as the Great Leader, and return performances from William Sadler as Death, and Amy Stoch and Hal Landon Jr. as Bill and Ted’s parents. To say more about their roles would be to rob the film of plenty of its comedic delights.

Of which there are many. Bill & Ted Face the Music is an instant laugh creator. It’ll make you smile, and lift your spirits. It does all the things a good comedy should do, without any of the snark or cruelty or punching down that has come with so many modern comedies. It’s nice to sit back and watch a comedy that simply wants to bring everyone together and make you feel good.

I look forward to the day when I don’t have to refer to the state of cinemas or the current pandemic in movie reviews, but it feels like an obligation to mention it here. Cinemas are doing it tough right now, and while I write this review in a city that has no community transmissions, I recognise that there are less than fortunate places out there in the world who don’t have this kind of luxury.

With that said, Bill & Ted Face the Music is the exact kind of film that you want to watch with as packed a cinema as possible. The laughs resonate loudly, and the warmth that the comfort of comedy brings wraps around you like the hug you so desperately need. I know that Tenet is a big screen kind of film, and for many that may scratch the cinema itch, but for me, Bill & Ted Face the Music was the exact kind of cinema outing I yearned for. A big screen delight with familiar faces who simply want to entertain you.

The big-hearted nature to the film means that that jovial vibe will easily carry on strong for those who can only watch it at home, and if you’re in that situation, I highly recommend getting as many friends and family members around as you can to watch it with you.

Look, Bill & Ted Face the Music isn’t going to be the film to bring everyone together and save the universe as a whole – no film could ever do that – but for ninety minutes of pure pop entertainment, I believed it was possible, and that in itself is a minor miracle. And that right there is the exact thing we need right now.

(Oh, and stick around for a post credits scene that’ll make you smile.)