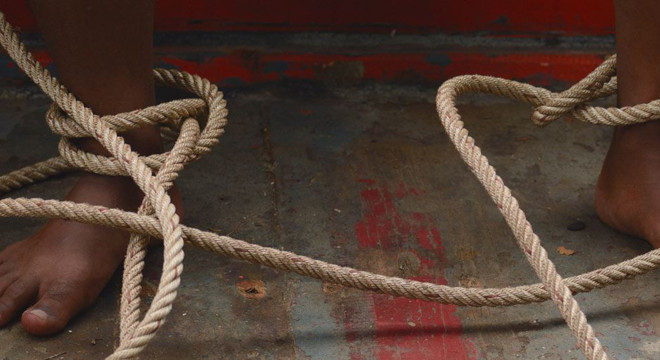 I’ll preface this review by saying that of late, I’ve been attempting to watch films with as little prior knowledge as possible. After all, trailers and plot synopses give away so much of the film, dictating how we’re supposed to feel about a narrative before we’ve even engaged with the film. I know that a review is intended to compliment a trailer, or a plot synopsis, and to inform you whether your initial expectations for a film is correct, and whether you should spend your time with its stories, and while my review style is not atypical of others, I do hope that I at least paint a picture of what a film is like rather than discussing the plot. I prefer to illuminate the mood of a film, to illustrate how it will make you feel, or what the thematic elements of it are, and whether that mood or feeling is one you want to sit with.

I say this as an introduction to Rodd Rathjen’s Buoyancy as a way of saying that I had no idea what I was getting into with this film. And, in turn, it seems that the audience of high school students that I found myself in at Cinefest Oz also had no idea what they were in for. This wilful ignorance on my behalf made the creeping dread and substantial unease that permeates through the entirety of Buoyancy initially feel opportunistic, as if the filmmakers were merely utilising the horrific world of people smuggling in Thailand to tell the story of a teenager who is fed up with life and gets in over his head. This is a difficult watch, with each moment amplifying the tension in your gut, making said tension punish you for sitting in the moment and judging it.

Well, at least that’s what happened with me. The tension judged me for my ignorance and initial decision to frown upon the bleak nature of Buoyancy. This is wrong of me to have done so, because the tension and bleakness is justified. This is not some opportunistic fictional tale about a kid wanting a better life and instead finding horror and torture. Far from it.

See, Buoyancy is a story that is pulled from real life. It’s one that’s been conjured after years of research into the horrifically real world of modern slavery in Southeast Asia, with ‘workers’ paying for the ‘opportunity’ to work in a ‘factory’. Those inverted commas are there to advise that these are not workers, but slaves, and these are slaves who have already lived in a desperate and dark world and who have turned to illegal work practices in the hope that they might be able to provide for their family, or to get a better life for themselves. The ‘factory’ they think they will be working in does not exist, instead, they are sold to the owners of seafood trawlers and forced into a disgusting and brutal world fishing. There is no hope here.

Our audience surrogate is Chakra (Sarm Heng), a fourteen year old kid who is frustrated with having to work in rice fields for his family, never being able to earn a dollar for himself. One night, he takes off to gamble on working in a factory, hoping to earn enough to study, or to make a better life for himself away from his home of Cambodia. But, his youthfulness and presumed energy makes him a prime target for a fishing boat, and that’s where we spend most of the films length – with Chakra and his fellow ‘companions’ on a gruelling, disgusting, turgid boat in the middle of the waters off the coast of Thailand.

Chakra tries to leverage himself up to a point of safety, hoping that if he manages to stay alive a little longer, then he’ll be able to make it to safety when they reach land. The majority of their catch is made up of ‘trash fish’ – grey and gloopy aquatic life that is inedible and only used for pet food –, with any high quality fish being presented to the ships ‘captain’ as an offering. This offering puts Chakra in good stead, but creates a rift between the slaves he works alongside. From here, that tension reaches a painful pinnacle, with genuinely terrifying sequences of torture being presented with all of the harsh reality that comes with the truth of modern day slavery. At the post film Q&A, Rodd Rathjen mentioned that while the violence is horrific, there are stories of much, much worse things happening out there in the ocean.

Which leads me to the most difficult part of Buoyancy. Yes, it’s an important story, and just like the equally unsettling documentary, A Woman Captured, I am grateful for having been made aware of the impact of modern slavery on the world. Thousands of boys and men are dragged into modern slavery every year, with many trying to escape this world and paying the price for that with their lives. This is a story that needs to be told, but it’s one that is far from entertaining, and in turn, is a genuinely difficult time at the cinemas. This brand of issue focused cinema is valuable and important – see my wilful ignorance at the beginning of this very review, where I had no idea how wide the scope of modern slavery was –, and it should never be ‘entertaining’, which in turn leaves it in a difficult realm.

Where A Woman Captured managed to document a real world story of modern slavery, Buoyancy uses an amalgamated, fictionalised version of these stories to illuminate the brutality that’s occurring on this planet, and by doing so, it becomes a complicated beast of a film. With thanks to cinematographer Michael Latham (is there a better cinematographer working in Australia than him? I doubt it), who blends the documentary work of Island of the Hungry Ghosts with the observant eye of Strange Colours to create a realistic immediacy within Buoyancy. The impressive visuals go far in the way of making this more than just a name-making film, and in turn, Rathjen manages to keep our attention on the plight of the slaves on the fishing vessel.

This is capital I, capital C, Important Cinema. It aims to educate and inform, rejecting the notion that cinema should entertain you completely. For the globally conscious viewer, this will be right in your wheelhouse, with facts at the end of the film becoming handy factoids that you can use to bring down the mood at the next dinner party. For the kids in the audience, I fear that the impact and awareness that Buoyancy was aiming for was lost on them – the association of a Cambodian teen dragged into slavery to their teenage selves eeked away as the credits rolled and their phones came back out. For me, I’m glad I was put in my place for judging the film so harshly during its viewing, and I’m glad I was educated on the brutality of modern slavery, but gosh, I really don’t know who this film will be for.