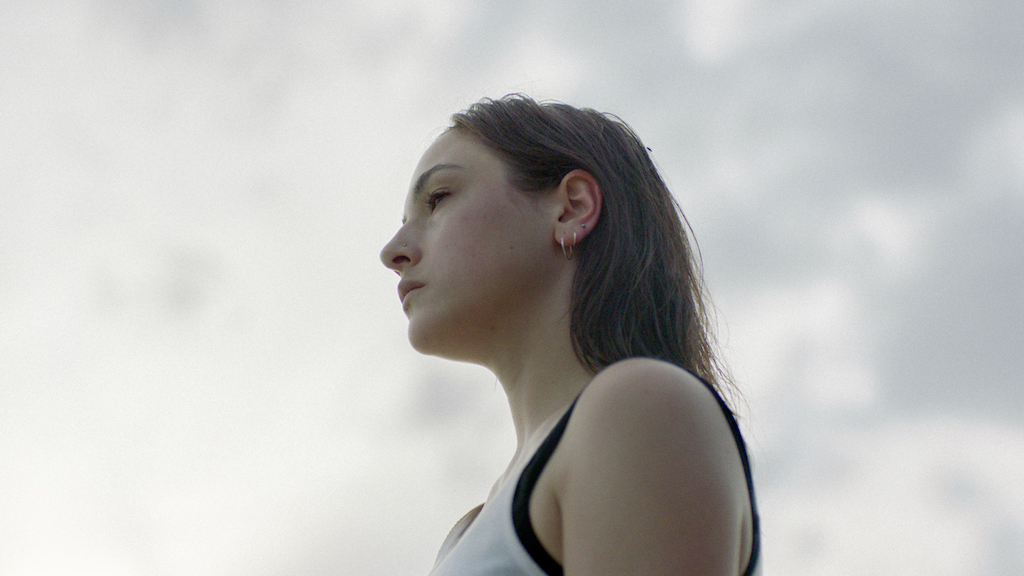 The desolate mining town is a sight long portrayed in Australian film and television, with the archetypal troop of Aussie blokes making up the minimal population. Usually these towns, all covered in rust and dust, are full of foreboding and reeking of endless cheap booze. An inevitable tragedy will undoubtedly befall anyone who strays into the town. Yet, in Alena Lodkina’s feature debut, Strange Colours, this is far from the case.

Sure, cheap beer of varying temperatures is consumed from dusk til dawn, and then dawn til dusk, but the blokes doing the consuming are far from Chips Rafferty’s ominous policeman in Wake in Fright. These are weathered men who have found themselves in this opal mining town because they can’t find any place worse to be. When a bloke mentions that a stranger passed through and stopped in Lightning Creek for a night fifteen years ago, and never left, it’s not because he’s ended up dead in a ditch somewhere, but because life is less complicated there.

This is a town that is devoid of femininity. Yes, the opals that are summoned from the earth will inevitably end up on jewellery that will most likely be worn by women around the world, but outside of this precious gemstone, there is little to suggest that a woman has ever been in the town for more than a moment. One would immediately think that this lack of a lass would turn the men in the town into aggressive misogynists, but just like those assumptions about a remote mining town, this notion has no substance in Strange Colours.

When Kate Cheel’s Milena arrives to see her terminally ill father, played by Hail‘s Daniel P. Jones, our conditioned muscle memory sets us on edge. You feel that inevitably, something terrible will happen to Milena. Her relationship with her father feels fractured – our mind racing towards thoughts of domestic abuse or sexual assault, neither of which eventuate -, but yet she remains in the town to help him out, before intending to move on to a job in Alice Springs. As Milena’s stay in the town carries on, she encounters a few of the local townsfolk and even sparks a friendship with Frank (a stunning performance by first timer Justin Courtin). Instead of Milena being turned into prey, she is made to feel part of a family.

Lodkina’s direction is calm, measured, and patient. There’s a similar vibe that comes from Kelly Reichardt’s work – minimalistic humanistic stories told on a quiet, small scale. Events unfold without any major fanfare – the most energetic moment is an vitalised tracking shot of Frank on the search for an opal thief. Outside of small moments like this, Lodkina aims to expose the viewer to the tranquility of Lightning Ridge. A peaceful sunset swim in a lake has Frank and Milena sharing an extremely tender moment. Even Milena’s random encounter with a purple faced stranger in the middle of the bush carries immense emotionality.

All performances across the board carry a powerful level of vulnerability that is rarely seen on film. The reliance on naturalistic performances from newcomers and untrained actors has raw, untapped emotions being explored. Daniel P. Jones weathered face tells an era of stories. Without the film telling us, we already know the sort of life he has lived, and what pains he has gone through to lead him to this point. Kate Cheel is a revelation. Her performance is quite simply one of the finest in 2018, it being full of quiet contemplation, of subtle reactions, and deep thinking. Strange Colours is a mournful film, but not oppressively so, and it’s partially thanks to Cheel’s observant performance that it doesn’t become a leaden experience.

Justin Courtin’s Frank has a deep core of untapped trauma that he appears to keep dormant with the solitude that Lightning Ridge provides. Milena’s connection with each man is unique, each carrying its own level of nuance that is easy to understand and relate to. However, none is more powerful than the connection between Frank and Milena. Frank carries a world of problems – ones that aren’t discussed, they are simply left in the air to hang, unaddressed and unattended to.

Lodkina peppers the film with a motif of atonement and cleansing. Milena repeatedly immerses herself in water – as if to try wash away dirt that simply will not disappear. The men of the town are searching for a forgiveness that will never come, so they have long forgone washing the dirt that accumulates beneath their fingernails and in their beards, for what is the use of washing something that will return right away? In one sequence, Milena bathes her father, rinsing his hair, making him anew. A refreshed man sits in the chair, letting the water fall over his face, as if being reborn in some way. This rebirth doesn’t halt the cyclical feeling that Lightning Ridge is some kind of purgatory that is subverted by the warm nature of the inhabitants.

This mood of subversion permeates every frame. Subverting the notion that desolate country towns in Australia are harmful, dangerous places. Subverting the notion that ageing men are hate spewing beasts. Subverting the expectations of what a town of men will do when a young woman arrives. Strange Colours feels like a course correction for rural Australia – gone are the histrionics of countless Australian films that portray the outback as some kind of zany, wacky place where everybody is eccentric and all they want to do is shoot roo’s. Instead, is a place of mournful peace, full of contemplation.

There’s something perfectly Australian about Strange Colours. The way Alena Lodkina manages to harness the silent Aussie male, and gather that iconography into one powerful piece of cinema is impressive. Not only is Alena Lodkina a talent you need to keep an eye on, but also watch out for Kate Cheel. These two talents are immense, and Australia is extremely lucky to bear witness to their work. A vital movie.