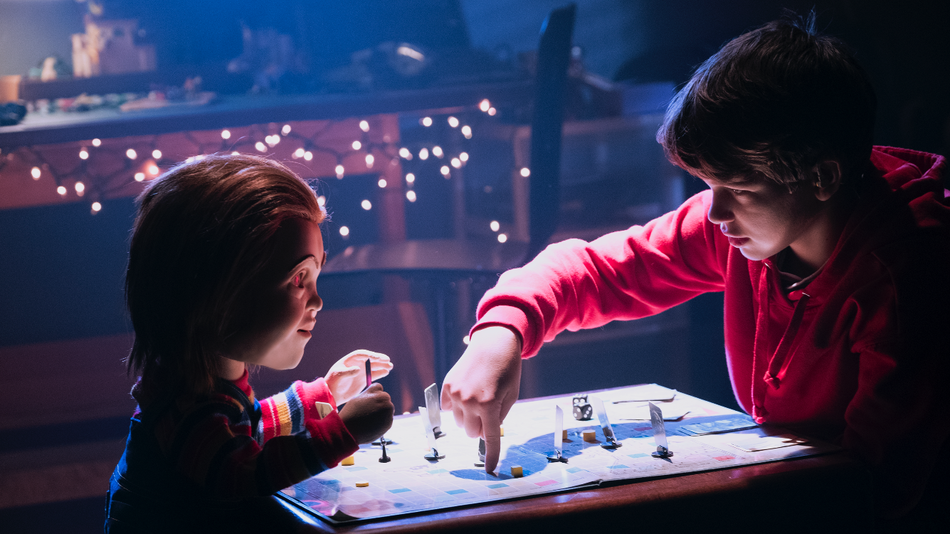 I’ll get the acknowledgement to Don Mancini out of the way, the creator of Child’s Play just a touch over thirty years ago. Mancini is a man who, through dedication and persistence, has continued the story of the possessed doll through many, many sequels helping foster a dedicated fanbase for Chucky, his undead doll bride, and their kids. While not all of them have been successful, it certainly has been fascinating to see Alex Vincent return to the role of Andy three decades later in Cult of Chucky, proving that a surprisingly coherent narrative thread can be sustained. Mancini retains control over his version of the Chucky narrative, with a TV Mini-Series to come later in the year titled The Chucky Murders. The Chucky fans are, understandably, defensive of Mancini and the Chucky legacy that he’s crafted, so when a remake comes along while the original series is still thriving (albeit, with greatly reduced financial returns), it’s reasonable to be sceptical.

So, with that out of the way, I need to say that I’m as surprised as you are to report that the 2019 version of Child’s Play is not terrible. In fact, it’s quite far from not terrible, moving comfortably into the realm of downright pure joy, and as the crimson drenched credits roll, it’s easy to say that Lars Klevberg’s take on Child’s Play is one that’ll stand the test of time.

It’s the year 2019, and ubiquitous Amazon/Apple surrogate company Kaslan is about to release their second run of their ‘Best Buddi’ toys. These interconnected toys aim to keep your kid entertained, working as a pseudo-child minder, allowing parents to monitor their kids while they sleep, and be the ever omnipresent figures in society that your ever omnipresent government wants you to be. In a world where every device is connected, with Alexa being able to tell the difference between your wifi connected Furby and your wifi connected vibrator (yes, they exist, and no, I’m not sorry you know that now), it makes pure sense to craft a horrifically hilarious horror film around the concept of a maniacal doll that takes the concept of being a kids ‘best friend’ to terrifying extremes.

Instead of Chucky being a possessed doll, he’s instead a maliciously coded device that has all its safety parameters switched off by an understandably vindictive sweatshop employee somewhere in Vietnam. Ending up in perpetually wet Somewhere Rundown, USA, this ‘Best Buddi’ device ends up in the hands of single mum, Karen (Audrey Plaza), who gives her lonely kid, Andy (Gabriel Bateman), the doll for his birthday. After a recent move, hearing impaired Andy is finding it difficult to settle in, especially as his mum’s new boyfriend, Shane (David Lewis), excels at being a pure textbook misogynist dickhead, and in turn, treating Andy less like a child who’s struggling to fit in, and more like a nuisance who is keeping him away from his mum.

The brilliance of Tyler Burton Smith’s script is the way he squirrels away sublime nuggets of social commentary about the world we live in, where our infatuation with the ‘shiny new thing’ is fairly dragged into the spotlight, and through a gore drenched gleam, he forces us to reconcile with the ever-interconnected digital life we live. Sure, the concept of a toy that can learn and grow with your child sounds good, but as shown in a joyously cynical montage, what happens when that toy misconstrues the seemingly harmless action of cutting a sandwich for a violent action? And, what happens when a toy whose core agenda is to ‘be the best friend’ for a child misunderstands the familiar frustrations of teen angst as being something genuine, with every burst of anger being taken seriously as a request for that disgusting boyfriend of your mum to be ‘gone’?

If anything, 2019’s Chucky is a sublime take on the Single White Female format – someone so dedicated to being ‘the one’ for someone, that everything and anything that harms that person is going to get cut down in brutal fashion. One reason to celebrate this Child’s Play film is Lars Klevberg’s dedication to delivering a purely gore drenched affair, with two of the most over the top and gloriously macabre deaths I’ve seen in recent years. There’s a beautifully orchestrated Final Destination-esque vibe to the deaths, with gradually escalating tension that monopolises on your desire to see copious amounts of blood spilled, eking the value of every last second of a despicable characters life for its complete torturous worth.

But, a cast of despicable characters is worth nothing if there aren’t any sympathetic characters for them to bounce off. Audrey Plaza’s single mum is inspired casting, with Plaza delivering a performance that equals her superb turn in the criminally underseen Ingrid Goes West. Plaza manages to be nurturing for Andy, while at the same time attempting to still have a life of her own. Gabriel Bateman’s Andy is a quiet revelation, embodying teen angst brilliantly, and never allowing Andy to become obnoxious or annoying. His two sidekick friends, Falyn (Beatrice Kitsos) and Pugg (Ty Consiglio), make for a superb team, and if there’s any chance of a sequel, then it’s this friendship group that has me most excited for it.

Then there’s Mark Hamill as the voice of Chucky, providing equal doses of menace and empathy, managing to make you instantly wary of any child device that is designed to talk to you. I mean, you were certainly already unsettled by the garbled dialogue spewing from a Furby, so Hamill’s Chucky merely pushes those devices over the edge into ‘burn them all’ territory. The gore drenched climax (one which is simply too good to spoil) utilises Hamill’s Chucky voice to perfect effect.

It’s also worthwhile noting that the deliberately naff designs of the ‘Best Buddi’ dolls. This intentionally off-putting aesthetic works as a way of trying to make society accountable for filling our homes with these ever interconnected devices by asking us, hey, you saw how ugly these things were before you bought them, why on earth did you ever allow this terrifying looking device into your home? What were you thinking? In one brilliantly hilarious sequence, the pits of the uncanny valley are mined as Andy tries to get Chucky to look as ugly and terrifying as he can – and sure enough, it’s disturbing, unsettling, and will cause endless laughs.

Look, as I said at the beginning, I’m as surprised as you are that Child’s Play is great. It’s ridiculously entertaining, straddling the line of genuine laughs with schlocky gore perfectly. Sure, the Mancini films have their charm, but honestly, if this is the Chucky series of the new millennium that we’re going to get, then sign me up for a truck load more because darn it, I had a riot of a time.