Daniel Craig’s run as the iconic spy James Bond has come to an end with No Time to Die, an explosive conclusion to his Bond era. As such, it pulls together the narrative threads of his four previous Bond entries in an impressive way. Joining Daniel Craig on the journey is David Dencik, an actor who is no stranger to the spy genre with work on Tinker Tailor Soldier Spy, and the upcoming The Ipcress Files series.

In this interview, David talks about keeping the secrets of No Time to Die to himself while it was delayed, what it’s like working with iconic directors like Cary Fukunaga, Jane Campion, David Fincher, and more, plus how the character of Valdo Obruchev was created.

No Time to Die is now out on home video and on demand services which can be found below:


David: How are you today?

Andrew: Good. Thank you all the more better for being able to talk to you about your work on No Time to Die, what a fantastic film. Congratulations!

Man, thank you so much.

You must be awfully proud of it. It’s been a while since it was filmed, and the responses to it has been really fantastic, so I can imagine you must be proud to have it out in the world, with people finally able to experience this really great entertaining blockbuster.

I’m so proud of it. I’m just thrilled that the world finally gets to see this movie. And on a personal note, I’m happy that the work that I put into it is finally exposed. So we can start having conversations about what’s in the film, and what happens with Bond and all that.

It must have been pretty exciting to know the major secrets of the plot for two years. How did you manage to keep the narrative to yourself over that time?

Well, I was full of respect for the franchise, I did tell my wife as the sole person, what actually took place in the movie. I’m not sure we should expose too much, because for people who haven’t seen it, of course, but it has some twists, and some turns that you should keep to yourself. It was not really a problem for me to keep it a secret because the more you wait, the better it becomes somehow. So that was not a particularly big challenge for me to shut up, even though once in a while it is. But not in this particular case.

This is not your first time working in the spy genre, with your work on Tinker Tailor Soldier Spy. What did you learn from that that you brought to this particular film?

Well, with Tinker Tailer, that was my first experience at doing acting in English; my mother tongue is Danish and Swedish. So I was nervous because of that, but 10 years later, when I did No Time to Die, I was more much more comfortable working in English. I have done other things in English since, so I think that’s what I take with me, my personal challenges that I face once in a while working in another language.

But also, I’ve understood much more about the UK, and how much royalty there is with John le Carré, Ian Fleming and I’m also now filming Len Deighton’s The Ipcress File. With the spy genre, I get to spend a lot of time in London, a city that I really cherish and enjoy. So as a person, I know more about the UK now than I did 10 years ago and I understand the position these spy series have in popular culture in the UK.

They are almost like a religion, like royalty, and they are dealt with so delicately and carefully. In No Time to Die, you are creating an iconic hero in some regards, but a villain in others. Valdo Obruchev is a very, very complex figure, but an entertaining one. How did you go about crafting the complexity of him?

It was in conjunction with Barbara and Cary Fukunaga in particular. We were discussing how much Russian he should be, for instance, we looked at some YouTube clips of the level of the dialect. It didn’t have to be that strong a dialect necessarily, but that’s what we went for. It was in conjunction with the makeup artist with the mustache that we decided to keep, to make him be more of a Slavonic or Slavic, as if he was educated in the 80s in some place in the Soviet Union, and he kept to that style.

If you look around the city to 2021, not many people look like that anymore. He has the looks of somebody who was an academic in the 60s or 70s. So that was something that we went for. I remember I was talking about how his hair should look like he just pulled a sweater over his head, as if he was oblivious to that. And we did have long sessions, even when there’s not much to look at, there were long sessions with the costume department, what kind of smoking would he wear, we decided to go for more pedestrian look, rather than make him look like one of their real plush or good looking classical 007 characters that you might find in other films. So we had discussions, we shaped it together with other people and ended up with what we ended up with.

And then he’s also a character that very much exists under the circumstances. He gets kidnapped, so that is a massive circumstance that he has to navigate or understand with himself. And that was just pure fun to act off, with all the explosions or people pushing him around or attaching him to wires or shoving in and out of cars or into water planes and stuff like that. He was always new this guy, wherever he came in, he’d never been before somehow. That was a very actable circumstance to be, it inspired me and it got my associations going about what it might like to be kidnapped.

Australian Cinema in ISO – Part One

I don’t think anybody would like to be kidnapped.

No one would like that! So all these things made up for me, I had a lot of inspiration. I just loved it when they called action and I was equally disturbed when they yelled ‘cut!’, or thank you, because I just enjoyed acting the part so much, I could go on forever.

How do you choose your roles? You’ve worked with some really great directors: Jane Campion (Top of the Lake), you’ve got David Fincher (The Girl With the Dragon Tattoo), you got Steven Spielberg (War Horse), and you got Tomas Alfredson (Tinker Tailor Soldier Spy). And now you’ve got Cary Fukunaga. Is it the director that you’d like to work with, or is it the script or the story that you’d like to work with?

I feel very lucky, having worked with all these people. These directors come with great characters, these directors come with great scripts. So it’s not either or. Having said that, if just one of them ticks the box, the character or the director, I will probably accept that role as well. I feel lucky that it’s just been serendipitous, a coincidence that this has happened for me. So I need a good role, I need a good character to get going on a personal note. But a good director also inspires me and it’s kind of both I’d say they happen at the same time somehow.

What is it like traveling away from home as well? You’ve done so many globe-trotting films, is it enjoyable being able to see all these great different places? Or is it a bit of a mixed emotion being away from home and working on such grand things?

I think you’re very correct in your analysis there as well, it’s such a pleasure to see the world like this, to get to experience it in the hands of movie makers and in the hands of production companies. But, I have two kids and a wife, and at times it is a long stretch. It’s a lot of work for my wife, and I miss them and gets lonely in hotel rooms and stuff like that, but hadn’t been for the last two years because of the pandemic. So I’ve been very much at home. I miss work right now though. London is very close to Copenhagen where I live. So when we shot Bond, I could go home over the weekends. I was very flexible. It was pre-pandemic so it wasn’t too bad. But we’re used to it. It’s how we live our lives in my family and many, many other acting families as well.

Thank you so much for your time, David, and congratulations on the role and the film and your filmography as well. I’ve gotten so much joy from your work so it’s great to be able to talk to you about it.

Lovely, thank you so much for those kind words. 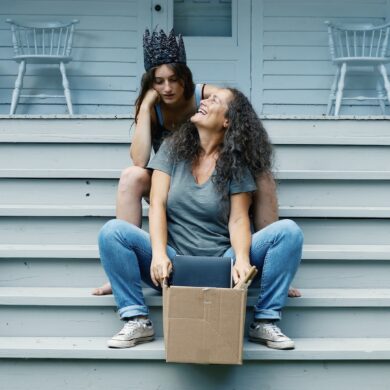