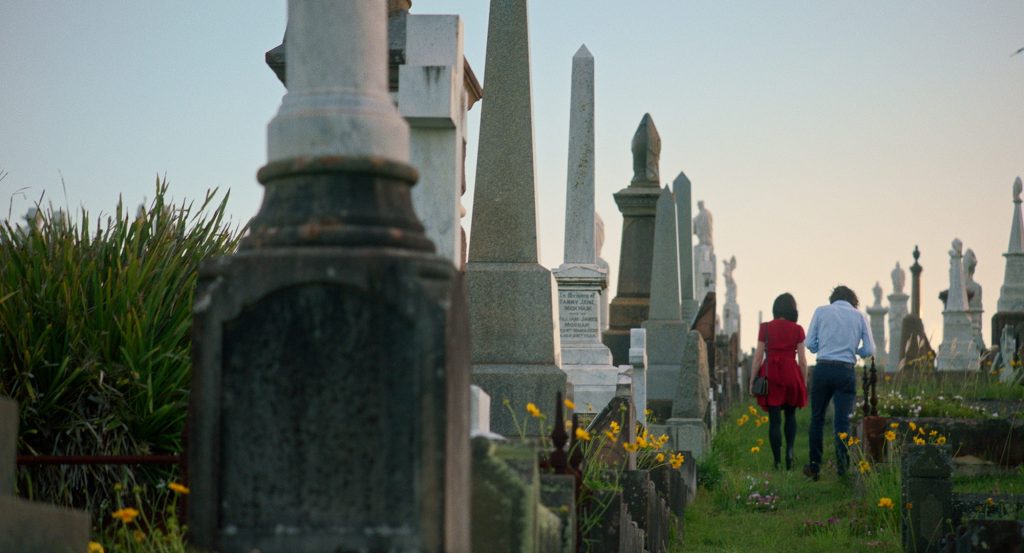 David Wenham makes his feature length directorial debut with the off-the-cuff Ellipsis. This on the fly, speedily captured flick, lives on the improvisational skills of the two lead actors, Emily Barclay as Viv and Benedict Samuel as Jasper. The plot is simple – Viv is crossing a busy road in Sydney when Jasper bumps into her, causing her phone to shatter on the pavement. From there, a slight relationship grows as Jasper helps Viv find a phone repair shop, and in turn, spends the day with Viv wandering around the iconic pseudo-Aussie capital, before she has to fly home to London to be with her fiancé. They take in the sights and sounds as they expound on life and words and art and food. If this sounds all very Before Sunrise-lite, then you’re not wrong.

Prior to Ellipsis, Wenham had another project in the works. The funding fell out, leaving Wenham and his actors high and dry. Keen to do something with Barclay and Samuel, David Wenham conjured up this idea. They workshopped the story over three days, and shot it in seven. To put it bluntly – if Emily Barclay and Benedict Samuel weren’t up to scratch, then this film would not work.

There could be two separate things happening within Ellipsis – there could be a deceptive simplicity at work that belies a greater exploration of Australia’s connection with the arts and society, as well as the importance of engaging with the world around you; or, alternatively, it’s just eighty minutes of two people banging on about how funny it is that purple and orange don’t rhyme. If you do some of the films work for it, and engage with it by scratching under the surface just a little, you’ll be rewarded. If you simply sit and listen, you’ll no doubt be left scratching the roof of your mouth wondering what is the point.

Benedict Samuel is good, building a charismatic character out of an otherwise bland foil for Barclay’s Viv. Jasper is fine, but we never get the impression he exists as a character out of the frames of the film. Our first image of him is head down, invested in the world in his phone, somehow managing to navigate a busy footpath. The collision with Viv appears to wake him up, blast him into consciousness, but after that he appears to be a man of little substance. Full of random facts and an almost-airhead level absent mindedness, Jasper is paper thin. While this feels like a criticism of both the character and Benedict Samuel as an actor, it instead feels like more of a comment on the state of the modern, city living man. More on that later.

On the other hand, Barclay’s Viv feels like she’s moving through life with purpose. Actions inform characters, with Viv’s anxiety over her broken phone and impending flight home providing the background to her thread. Momentary conversations on a borrowed mobile with a voiceless partner suggest a fractious relationship that won’t be healed by the yet-unscheduled impending wedding. Barclay brings an energy to Viv that works well with the improvisational tone of the film. An early conversation with Jasper feels like time wasting, but as their journey carries on, a sense of comfort and ease springs with the two.

Ellipsis thrives on showing the side of Sydney that is rarely seen on screen. The streets, alleys, bars and buildings that exist outside the Harbour Bridge, Kings Cross and the Opera House. Cinematographer Simon Morris, employs his documentary experience in capturing the ever moving, ever active nightlife of Sydney. It’s here where the film truly comes to life as we’re also exposed to the endless colourful characters who pepper the streets and buildings. Whether it be the on the spot interrogation from a genuine stranger about where Jasper and Viv are from, or the comical and energetic sex shop workers (Rome Duncan and Paul Anderson) who spout almost PT Barnum level sales tactics to push their wares, director Wenham is conscious to paint the world as one that’s ripped from reality.

This extends to Ferdinand Hoang’s subplot as ‘Phone Repairman’, fixing in place the backbone to this slice of reality. Australian audiences rage over the insertion of politics into their entertainment – see the sole comment on my Three Summers review -, but is it a case of them not wanting to accept the world they live in? Hoang’s subplot as a Chinese immigrant trying – and failing – to apply for permanent residence in Australia is fleeting, taking up all of about three or four minutes throughout the whole film. But, its presence is no less important, working as a necessary contrast to the nonsensical discussions that Viv and Jasper have. A shot lingers on the online citizenship test, with a question that not even I could answer hanging on the screen, waiting for an answer to be chosen.

Hoang’s repairman stays up late to repair Viv’s broken phone, forgoing the household repairs that his wife has asked to be done for weeks. To him, the broken phone is more money through the door to live in Australia, to her it’s another thing keeping her husband away from their relationship. Is the ‘better life’ in Australia worth it it it means their relationship suffers? It’s in these moments that Wenham asks us to consider the world around us, to consider those who can’t take a day off to wander around a city and see the sights. To consider those who exist outside the daylight hours, who thrive and live off the early morning patrons of the world. The exotic dancers, the homeless, the different folks out there who don’t get their faces plastered on billboards or on the front of magazines, the guys with one leg, the stranger on the corner of the street, the all night convenience store workers trying to keep their eyes open at 3am. The people you don’t see while you’re walking down the street with your head in your phone.

The illogical, but completely real, citizenship questions feel like an extension of Jasper’s attempts at conversation starters. Walking past the infamous ‘poo on sticks’ of Kings Cross, they ask, ‘if art is the only thing that remains of us in a thousand years time, what are people going to think about us?’ Viv and Jasper attempt to engage with the culture of Sydney, but this engagement feels empty – almost as if they are the future they’re asking about. After all, when they stand over Henry Lawson’s grave, they have little to say.

When a stranger asks them where they are from, Jasper and Viv stand steadfast with their statement that they’re from Australia and New Zealand respectively. This automatic defensive stance feels like a pair of daytime pigeons who find themselves in the realm of the night owls, puffing themselves up to make themselves seem bigger than they are, unwilling to engage with the history of Australia.

If we scratch even further under the surface of Ellipsis, we find an interesting look at the way middle class, financially comfortable folks, engage with the world around them. Or rather, don’t engage with the Australian culture. Australia is, for want of a less heated term, a country full of philistines. It routinely rejects the arts that are created within it, and when discussions lean towards the intellectual, it’s routinely derided or shot down in disgust. Yes, this is a broad stroke statement, and it doesn’t entirely apply to Viv or Jasper as characters, but it’s one that runs through the deep currents of Ellipsis. Viv and Jasper laugh off the comments in the sex shop as if the salesmen are the joke, and that the idea of one indulging in sexual proclivities is frowned upon. As the night wears on, Jasper and Viv become looser, keener, eager to engage with their city. Yet, they still feel like distant cousins of the angry, toxic personas that Gareth Liddiard rants about in Taman Shud.

An absent minded moment has Jasper lead Viv all the way to Bondi to see the Sculptures by the Sea exhibition, only to find that they have arrived too late, with the sculptures being hauled off on trucks. They are the ‘should do’ers of society – people who have a calendar full of Facebook events that they’ve marked themselves as attending, but forget to actually attend. The people who say they should see this film, or should go to this concert, or should visit that restaurant, but by the time they break themselves free from the busy nothing of their life, they have missed the film, and the restaurant has closed, and the band has broken up. But, as John Lennon once sang, life is what happens when you’re busy making other plans. Jasper and Viv being forced into this day of adventure opens their eyes to things they may not have seen before.

When you contrast Jasper and Viv’s conversations with that of Jesse and Celine in the Before trilogy, one can’t help but feel that the culture of Europe helps fuel and drive these powerful intellectual conversations. Yes, Ellipsis isn’t aiming to be the Australian Before Sunrise, but that doesn’t stop the comparison from happening. Australian’s simply don’t walk around our cities pontificating about ancient writers, or composers, or about deep concepts they’ve had about culture. In this regard, Ellipsis is a faithful presentation of the average Aussie.

Part of the reason why Ellipsis exists is that it’s the sort of film that David Wenham would like to act in. Wenham is a great actor, and his talent helps Emily Barclay and Benedict Samuel deliver solid performances. As a director, he’s crafted an intriguing beast of a film. It’s lean, it has the kernel of a concept that it paints out over its run time, and it engages more than exhausts. I’ve found myself ruminating on its moments long after having seen it, considering as well that while I watched it I found my mind wandering. To this end, Ellipsis doesn’t always work, but it does make me hope that just like the Before series, I’d like to see this group return in a few years time to continue this tale.