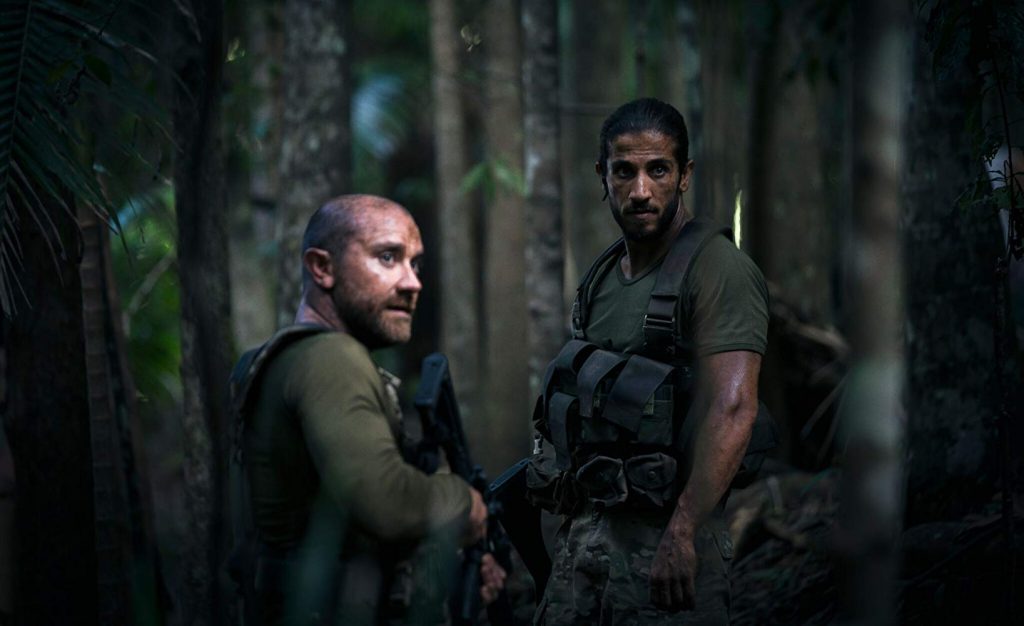 Following on from dark urban fantasy The School, writer and director Storm Ashwood cants in a very different direction with Escape and Evasion, which sees Josh McConville (1%, The Merger) as Seth, a former special forces operative struggling with PTSD after a disastrous mission in war-ravaged Burma.

This is a topic rarely tackled in Australian cinema, but a familiar one for American directors. Just as this year’s Danger Close: The Battle of Long Tan is one of the few Australian films to deal with our involvement in the Vietnam War, while the U.S. has pumped out Platoon, Full Metal Jacket, Hamburger  Hill, We Were Soldiers, and many more, Escape and Evasion stands as one of our only films to deal with the aftermath of war, whereas America – even just limiting ourselves to Vietnam for the sake of brevity –  has Hal Ashby’s Coming Home, Ivan Passer’s Cutter’s Way, David Nutter’s Cease Fire, Francis Ford Coppola’s Gardens of Stone, Norman Jewison’s In Country, and Oliver Stone’s Born on the Fourth of July and Heaven and Earth. And let us not forget The Deer Hunter.

Perhaps it’s the laconic Australian national character that stops us from mounting these stories – we’re just not that good at talking about our feelings, are we? Luckily, however, we have actors of McConville’s caliber who can show, rather than tell. When we meet Seth, he’s got a pistol pressed to his temple, trying to work up the courage to end it all. We also quickly learn that he’s got an ex-wife he is estranged from and a young daughter, Lizzy (Jessi Robertson), he is neglecting. Reminded that he has people who both care for and rely in him, Seth attempts to put his military career behind him and find peace in the civilian world, with help from psychological counsellor Michelle (Rena Owen).

Unfortunately, he’s plagued with hallucinations of his time in the field, and a journalist, Rebecca (Bonnie Sveen), whose brother Josh (Hugh Sheridan) died on the mission Seth is trying to forget, won’t let sleeping dogs lie, and so a reckoning is inevitable. As the book says, we may be through with the past, but the past is not through with us.

Escape and Evasion’s two chief strengths are McConville, who has never given a less-than-fully-committed performance and isn’t about to start here, and Ashwood’s facility for hallucinatory imagery. As poor Seth – and we – see jungle mud bubble up from a freshly poured tumbler of scotch, or blood begin pouring from his hands where no wounds lie, McConville’s taut, bug-eyed performance sells the illusion – we’re in the nightmare with him, the performance working in concert with Ashwood’s imagery to pull us in. There are moments that approach – if not quite match – Jacob Lyne’s 1990 cult classic Jacob’s Ladder, which saw Tim Robbins’ returned vet dealing with similar unsettling visions linked to his wartime experiences.

Escape and Evasion never goes down that surreal path, keeping its visual flourishes as metaphors for Seth’s internal struggle. Unfortunately, elsewhere the drama sometimes falls flat, with lackluster line readings and the odd dead dog dialogue letting things down – another draft or two could have worked wonders. Likewise, the flashbacks to the jungle – complete with well-executed action sequences and an important cameo from top Australian character actor Steve Le Marquand – occasionally drift close to cliché territory, and it’s nothing a writing polish wouldn’t fix. The fundamentals are all in place, but the details need attention.

Still, Escape and Evasion is an ambitious piece, conceptually and technically, and I’ve no doubt that, as a director, Ashwood could work miracles with a bigger budget at his disposal. For that, and for being a great showcase for McConville, it’s worth your time.