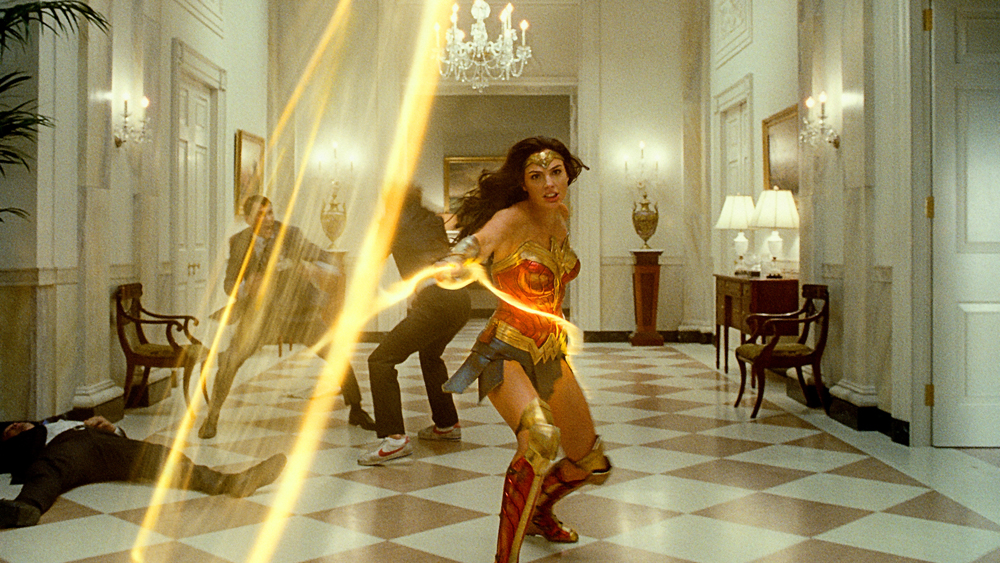 Wonder Woman 1984 (or, as is titled in the credits WW84) takes place in the height of eighties America. Greed, for lack of a better word, is good, and as a social currency, it’s positively booming. The notion that you can have ‘anything you want, anything you can dream of, you can have it’ has apparently replaced the American dream and as such, it has become the catchphrase of TV celeb, Maxwell Lord (Pedro Pascal), a self-made wannabe-oil magnate who skates through life on charisma alone.

After a jewellery store in a shopping mall is sprung during a robbery as being a front for a black market for ancient relics, newly minted Smithsonian anthropologist, Barbara Minerva (Kristen Wiig), discovers a mysterious rock that might grant the holder a wish. Barbara idolises her colleague, one Diana Prince (Gal Gadot), and wishes to be just like her. Little does she know, she’s getting more than she bargained for. Lord manoeuvers himself into the Smithsonian to get a hold of the ‘dreamstone’ and once in his possession, he sets about causing untold destruction and global instability, threatening the existence of the world.

In the nineties, the horror genre Wishmaster series kicked off a run of films that leant into the notion of wishes being an act of evil. They were moderately enjoyable straight-to-video fare that scratched a good enough itch that satiated horror fans. For the most part, WW84 is just like the Wishmaster films. Serviceable, tolerable, and yet, moderately inept, all the while highlighting how wishes are evil.

After the first genre-defining Wonder Woman entry excited and thrilled, and ushered in a new era of superhero films that finally allowed woman to be the centre focal point, it’s disappointing that WW84 is a tired, overdrawn and outwardly bland affair. This entry is decidedly action-lite, with precious few fisticuff sequences throughout its two and a half hour runtime. While it’s refreshing and nice to see a superhero flick where the hero in question often uses their brains over their brawn, it is disappointing that said brains is implemented in a boring and often archaic fashion.

Director and co-writer Patty Jenkins managed to bring a modern sensibility to Wonder Woman, imbuing the film with genre-disruptive moments like the famed No Man’s Land sequence, but with WW84, the narrative is hampered by a reductive tone that actively distils the earnest progressive stance of the first film. Here, writers Geoff Johns, Dave Callaham, and Jenkins, utilise tired eighties tropes that were better off left as relics of an era long gone, and yet, now seemingly idolised through retro-tinted glasses.

Heroic moments of Wonder Woman pushing a young girl to safety and into the arms of a giant stuffed bear during a brawl are charming, and provide a welcome beacon of hope for kids, but then they are defused with consciously outdated notions. Kristen Wiig’s serviceable turn as Barbara Minerva is a particularly reductive character, with her science focused character only being noticed if she dresses up, dumbs down, and wears high heels. There’s something to be said about the art of utilising negative aspects of an era to highlight the archaic notion of what has gone on in the past, but when a film like WW84 instead leans into those notions with characters like Barbara, it only works to dull the progressive strides that the character of Diana represents.

It’s disappointing that for a series focused around the heroics and empowerment of women, that the narrative leans into an unnecessary superhero trope that has Diana losing her powers and becoming mortal. This leads to a fight sequence that has her being rescued by a man, further diminishing the pride and prominence that comes naturally with an icon like Wonder Woman. This is not to say that Diana can’t be saved by a man, but rather that the narrative never makes a firm enough case for the threat to exist in the first place. In the end, WW84 feels like a filler episode, or an interstitial issue of a comic run, making one wonder why they went with this specific story for a big screen event.

Try as she might, Patty Jenkins struggles to make this wish-focused plot exciting, and as such, Pedro Pascal’s villainous businessman (earnestly borrowing elements from the 45th President of America) feels like a non-event. Pascal is a fine actor and delights in chewing up the scenery, but he fails to make a convincing villain. Additionally, Kristen Wiig is dull as Barbara, but it doesn’t help that she’s saddled with some of the most ludicrous dialogue of the film (a comment about wishing to be an apex predator is particularly guffaw inducing).

Which is all a great shame as there are plenty of genuine moments of splendour and awe throughout WW84. An Aladdin-esque ‘A Whole New World’ moment has Diana and her beau gliding through a fourth of July fireworks display in what is a truly breathtaking sequence of visual brilliance. If there’s reason to celebrate Jenkins choices as a director, it’s with moments like this that highlight the need for quieter moments during a cacophony of pixels and digital trickery. This is akin to the awe inspiring splendour of seeing a dinosaur for the first time in Jurassic Park, it’s truly mesmerising. Later, as Diana takes to the skies, we’re immersed in a jaw dropping experience of what it feels like to fly. Out of the pantheon of ‘people flying in films’ sequences, WW84 stands tall as one of the most breathtaking to experience.

It’s in these moments that the heart and passion of Diana Prince as Wonder Woman shines through. Sadly, a dull plot and a bloated runtime mutes her heroics, making WW84 feel positively somnambulistic and routine. For the diehard fans out there, there are genre aspects that will no doubt elevate the enjoyment of this flick, but for the average viewer, this may just struggle to satiate that blockbuster entertainment we’ve been craving.