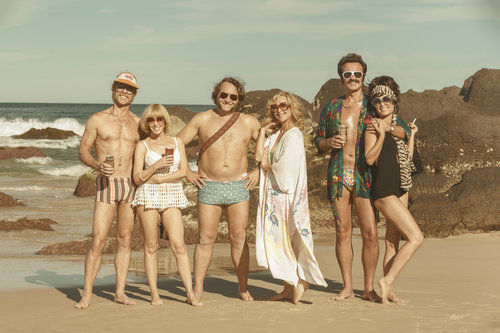 Boy oh boy. That was quite the ride. In the family station wagon, to the beach, in the seventies.

Directed by Stephan Elliott (The Adventures of Priscilla, Queen of the Desert), coupled with its huge, high-profile cast, including Jeremy Sims, Asher Keddie, Guy Pearce, Radha Mitchell, Kylie Minogue, Julian McMahon and even Jack Thompson, Swinging Safari was bound to be a hoot. It is a hoot – but it is also a bit confusing at times. More on that in a sec.

Following the lives of three families in beachy suburbia, its plot reads: “a teenager comes of age in a small Australian town during the 1970s when a 200-tonne blue whale gets washed up on a local beach.”

Semi-autobiographical, the film is ‘kind of’ told via the kid (Elliott-esque)’s gory home-movie-making obsession and the beached whale side plot – however, each time it moved from the kid’s horrendous gore films to the whale plot and back to the general swinging families mayhem, it felt like three different stories – and genres.

Cast-wise, the adults were all pretty great. Except Kylie. Sorry. Towards the end she managed to deliver a few lines, but for the most part she awkwardly spat out half a line, a word, a face – or was just downing vodka. On the other hand, Sims and Pearce absolutely nailed it – as the reckless, somewhat cringe-worthy 70s dads. The abundant scriptwriting puns and Pearce’s delivery of lines like, “it’s not fucking on the beach; it’s on the fucking beach and stop fucking swearing” was pure gold.

The lead kids, Atticus Rob as Jeff, and Darcey Wilson as Melly, were outstanding, and provided the underlying heart of the film. However, again, just when you thought it was going to develop that heart and go somewhere deeper, it’d revert to the cack-your-face-off brash and crass scenes. Just when the emotion was building (like a wave), the outrageous scenes would come crashing down (like an exploding whale!)…

If you grew up in the seventies (as I did), you’ll absolutely love the attention to detail in the sets, the costumes, the LINGO (a couple of modern terms drop in, but for the most part, it’s bang on!), the sounds, the scents of the seventies (you can hear the squelch of the plastic house mats and smell the KFC buckets on the beach) – the brilliant time capsule that it is – and the seemingly outrageous pre-PC/helicopter parenting. It’s jam-packed with hilarious digs at the loose-reined seventies, like the ‘hilarity’ of kids getting set on fire or injured in general, plying them with booze, rewarding a doctor-defined ‘active’ daughter with the Pill, ‘harmless’ sunburn and cigarettes, to digs at heavier stuff like abuse, paedophilia, and homophobia – all fair game for visual and verbal assaults.

Carried by its laugh-out-loud script and visually and verbally brilliant scenes like the couples gathering in the sunken lounge (a visual treat!), talking about ‘how to fondue’, and having conversations about ‘exotic’ things, some ‘far away in Papua New Guinea’, the tongue is firmly in cheek – and occasionally in each other’s mouths. There is so much detail – it’s like one of those “You grew up in the seventies if…” internet lists. It’s all in there. And it’s all bloody hilarious.

Aside from the silly, crass movie versus heart movie dilemma, it does cross the line a touch – or a lot, depending on your sensitivity – in parts, some of which, well, you can’t un-see!

During the film, I exchanged many g’faws and bahahahas with the woman next to me as we recognised the many seventies things, sayings and moments, and at the end, she turned to me and said, ‘the seventies weren’t that bad were they?’ Well, it all rang pretty true for me, so I guess while it was deliberately amplified using humour, as the narrator (Richard Roxburgh) says, ‘our parents did the best they could with the bent tools they were handed.’