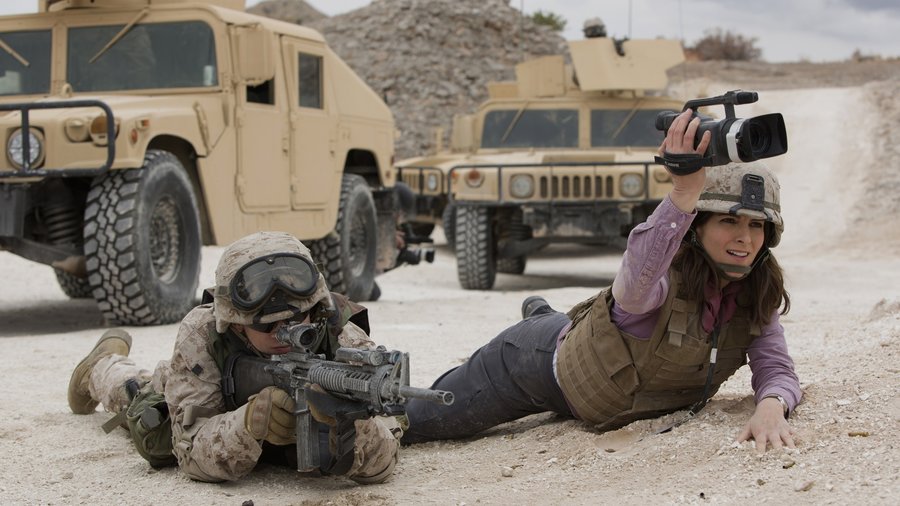 If there’s a running theme through the films of directing duo Glenn Ficara and John Requa, it’s that of characters finding their place in the world. Whether it be Jim Carrey’s con-man Steven Russell in the criminally underseen I Love You Phillip Morris, or Steve Carrell’s Cal in Crazy, Stupid, Love., there is a running theme of people finding their lives hit for six and then struggling to correct themselves. Here enters Tina Fey’s Kim Baker in the war drama/comedy Whiskey Tango Foxtrot.

In what is quite possible the most anti-Tina Fey role that Tina Fey has played to date, Baker is a forty-something New York based journalist who is dissatisfied with the direction her life has taken. She’s not depressed, she’s not in search of ‘wanderlust’, she’s just simply disappointed with where she has ended up in life. The opportunity to get a scene change is thrown in her lap, and before you know it, she’s moved from the bustling streets of New York to the shit-filled air of Afghanistan.

As the title and promotional material may suggest, this is being touted as being a wall to wall laugh a minute comedy. Yes, there is comedy here, and some very fine comedy at that, however what drives this story is more is an interesting story about finding your place within the world. The idea of a westerner visiting a third world country to learn more about themselves and thus, turn into better people, can be a cringeworthy one. Fortunately, this is a small aspect of the story that evolves here. Granted, there isn’t much of a story – this is more a series of events that encompass what America’s involvement in the Afghanistan war entails, as well as what the effect the influx of westeners on the Afghan’s (not Afghani’s); after all, the American troops are simply a new group of foreigners trying to organise what culture exists within Afghanistan.

The look at journalism and the continual search for the ‘next big story’ helps provide the narrative backbone of the story. The media is not portrayed as a beast that wants to consume all, instead this is a personal look at someone who simply wants to do more than push pens on a desk all day long. Sure, there is a casual look at the blood lust that the media wants from wars, and the eventual boredom that the public gets from a war that lacks any real meaning, but these are more glances at the topics rather than a full blown investigation. Tina Fey’s Kim Baker feels like a sideways version of Nora Dunn’s Adriana Cruz in Three Kings. Baker’s steps to becoming addicted to the danger of Afghanistan as well as the risk of sitting with potential war lords is fascinating, and it’s great to see that Fey manages to provide a compelling performance here. While this look at journalism isn’t as topical as other journalist-based films like Spotlight or Zodiac, it is still an interesting glimpse into the world of war journalists, even if it doesn’t get immersed in their day to day lives.

What works so well about Whiskey Tango Foxtrot is that it is a film without an agenda. Sure, it touches on many feminist ideas, but these are born from the character of Kim Baker herself, and not the film wanting to provide a comment on the state of Afghanistan, or to provide a comment on the treatment of Afghan women. Honourably, Baker isn’t portrayed as a woman who has come into a foreign land and through her nobility and whiteness manages to make every single man within Afghanistan see the error of their ways.

Tina Fey is equally measured by previous Ficara and Requa collaborator, Margot Robbie, as Baker’s friend Tanya Vanderpoel. Robbie excels as a journalist who has settled in Afghanistan to the point where she can call it home. It helps that she’s allowed to (sort of) use her Australian accent. Fellow Australian Stephen Peacocke also gets to stretch his Australian accent as Nic, Baker’s muscly security. The huge variety of accents on display here is greatly welcome, providing a look at the truly international aspect of journalism within countries where war rages on. Alongside Robbie is the always watchable Martin Freeman as a raucous Scotsman, and his Fargo co-star Billy Bob Thornton as a General who’s troop seems to just exist to continually repair a well that keeps getting blown up. Christopher Abbott’s Fahim Ahmadzi could have potentially gone off the rails as Baker’s Afghan assistant, but as well proven in Girls, he’s a really solid actor that provides a great element of humanity as the ‘face of Afghanistan’ – even if he may not actually be an Afghan himself.

Whiskey Tango Foxtrot is an entertaining film – one that provides Tina Fey with the opportunity to stretch her acting ability as best as possible. The marketing of the film feels a little askew given the final product, but I’m not entirely sure how one would successfully market this film. While the comedy elements work really well here – with one scene going down as possibly the funniest scene I’ve seen so far in 2016 – the drama elements work just as well, making Whiskey Tango Foxtrot a well worthwhile film.