Travis Akbar catches up with Angel of Mine director, Kim Farrant, to discuss the process of making the film.

Inspired by the 2008 French film Mark of an Angel, Kim Farrant’s 2019 effort Angel of Mine is about a woman who has lost her child in a fire, and was almost killed herself, and after seeing a young girl at a party, believes her child may still be alive. What follows is a fantastic, eerie performance from the nothing-short-of-great Noomi Rapace, as Lizzie, the desperate, obsessed and bordering on dangerous grieving mother.  Yvonne Strahovski, making up for the outrageously bad film that was The Predator, plays Claire, the protective, instinctive mother of Lola, the girl that Lizzie has become so obsessed with.

Angel of Mine, adapted by Luke Davies (Lion, Catch-22) and David Regal (Zeke and Luther) follows a seemingly generic path as far as obsession films go – the character finds something to become obsessed with, they turn up out of the blue, watching, being seen watching, causing distress up until some form of thrilling climax. But I felt that there were two things that put the film a step above most obsession thrillers I’ve seen. The first was the characters. In most obsession thrillers it’s pretty clear cut who is good guy and who is the bad guy, but in Angel of Mine, this line is blurred. The protagonist and antagonist aren’t so clear cut. While Rapace’s Lizzie clearly has issues, you can’t help but think, maybe she’s right? But what does that make Strahovski’s Claire? Innocent mother? Sadistic Kidnapper? There’s plenty of questions but not a lot of answers, until, the thrilling climax. The characters being difficult to read was the best part, it kept my interest level high.

The second thing that helped keep the film a step up, was the performances. As I wrote earlier, Rapace gave an eerie performance and it was really quite well done. Rapace is one of my favourite actresses and she did not skip a beat here. She is great, her facial expressions, body language – she is haunted and clearly suffering from grief. I found her to be very convincing, I felt sorry for her. Strahovski was also great, she was strong, protective, intuitive and her performance showed this. Richard Roxborough played Claire’s husband, the more laid back, less suspecting cool dad who takes a lot more convincing that someone is stalking his daughter – Roxborough steps from one role to the next with ease, always a dependable performer. He does no wrong here. Luke Evans is also along for the ride playing Lizzie’s ex-husband. Evans role was the smaller than the aforementioned actors, but he was just as good. With a raspy, frustrated voice, Evans couldn’t convince Rapace by any means that she needed to stop what she was doing. That she needed help. I loved his performance, especially in his final scenes, which were only brief, but had a big impact on me emotionally. The girl in question, Lola, is played by Annika Whiteley, and she is also fantastic – sweet and innocent, unknowingly a target.

Angel of Mine is your standard slow-burn thriller that is far more enjoyable because of Farrant’s direction and excellent performances, especially Rapace, and will keep you guessing until the very end. 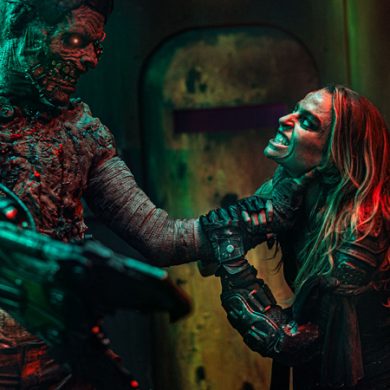