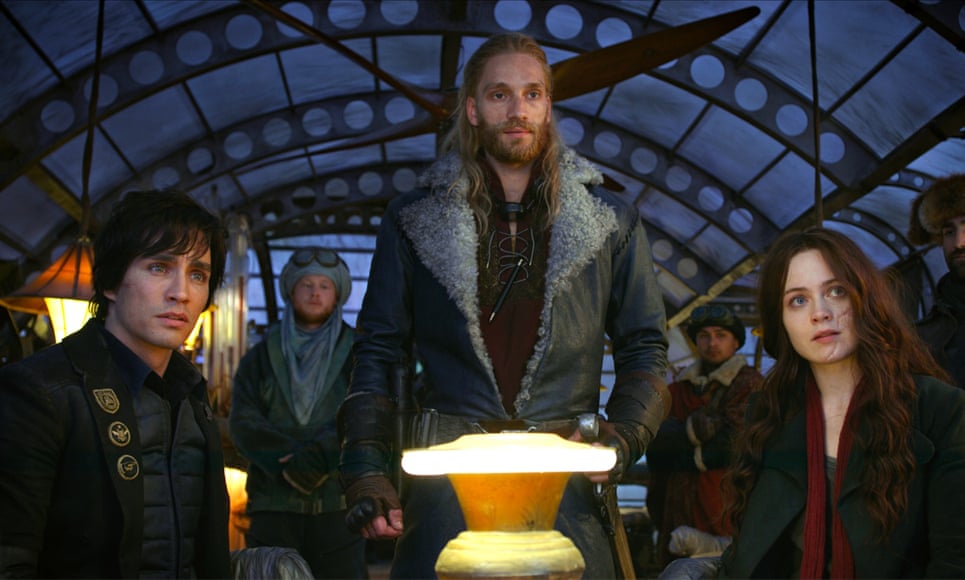 About ten minutes into Mortal Engines, I became convinced I would never find out what a mortal engine actually is. Is it the giant behemoth city that is London on wheels? Or maybe it’s the centipede like vehicle that rambles across the wasteland with ease? Or, could it be the steampunk planes that defy gravity? Or, possibly it’s robot Dad who has green eyes that pierce through the night?

If there’s one thing for sure, there won’t be a second Mortal Engines film to give an explanation. Maybe that’s what a mortal engine is? The behemoth that is Hollywood endlessly creating bloated CGI-filled flicks that cost more than a small country makes in a year, all the while they’re destined to fail at the box office. Eventually, once the template of The Producers has failed one too many times, these mammoth production houses have no choice but to dissolve into nothing, leaving a field of producers standing alone scratching their heads with no idea how this ever could have happened.

Sure, this film does contain the best post credits scene of all time (as in, the film simply cuts to a black screen, oh? That wasn’t a post credits scene and instead was just the sweet mercy grip that this whole thing was finally over? Well then…), but even though there are apparently three more books in the series,there is simply no way that there will ever be a continuation of this series. Apparently the books are popular young adult fare, which given the content, I can easily believe that.

Now, damning this film with the faintest of praise for a brief moment, I will say that Mortal Engines is one of those eighties films (like The Goonies) that you fell in love with as a kid, and then you rewatch it as an adult and realise it was all bunkum trash. It’s a childish kind of good, but I fear that kids nowadays are a little bit wiser than we were in the eighties and wouldn’t stand for such mediocre material. Well, even though Conan O’Brien once said, ‘don’t be cynical’, it’s bloody well hard not to approach this tepid affair with a heavy dose of cynicism. There’s so little to hold onto with this film.

Plot? Oh, yeah, you probably want to know about the plot.Well, there’s a girl with a scarf over her face because she’s got a scar. Fear not BFI, she’s the hero of the piece so, y’know, positive representation and all that. Her name is Hester Shaw (Hera Hilmar). If you forget this, the film will remind you every thirty seconds as supporting characters are endlessly shouting out her name, HESTER SHAW!, even though as a ‘main character’ she’s surprisingly devoid of any kind of agency.

Instead, the guy driving the plot is Han Solo Mark 9, this time played by Robert Sheehan. Sheehan has been in films before, I know this because I quite liked him in Three Summers, but his casting here feels like it happened simply because he was in a film called The Mortal Instruments: City of Bones. Good on you Rob. Alas, there’s little to suggest that he’s going to go on to do bigger, brighter, better things in this flick.

Hugo Weaving appears because New Zealand isn’t very far from Australia and Peter Jackson has his phone number on speed dial. He’s Hugo Weaving. The biggest crime of Weaving’s casting is that the film never allows him to chew on the dialogue it throws at him. Heck, when Weaving’s villain calls someone a dinosaur, and then remarks that he’s ‘the meteor’, the film presents this solid line with all the impact of a wet paper towel. Soppy and annoying.

Then, there’s Stephen Lang as CGI robot Dad, Shrike. He’s a robot. And he’s Hester Shaw’s surrogate Dad. For reasons, he is real mad at her and now stalks the world searching for her. The character design is admittedly quite impressive, but it’s impossible to shake the feeling that Shrike walked out of a Pirates of the Caribbean film into this one by mistake. No doubt the character has some kind of emotional resonance in the books, but here it’s just another subplot that makes no sense and goes nowhere.

Which is the best way to explain Mortal Engines. It’s nonsensical pap that would have been better serviced under the title Steampunk and the World of Tomorrow. It wants to make some kind of fun at the way we’re obsessed with technology, but in a film fuelled by said technology, well, it carries no weight. And, on top of this, for a film that’s released by Universal, it’s exceptionally poor of them to include a joke about how Minions are deities that we are obsessed with. Ho ho, funny stuff there guys.

Look, there’s no reason to see Mortal Engines. It’s not ‘so bad it’s good’. There’s no one set piece that is overly impressive – unless, that is, you’re easily impressed by CGI noise, then by all means, giants cities on wheels eating smaller cities might be interesting enough. The endless swooping camera movements, the overly dramatic music, the inconsequential characters, and the nonsensical plot leave you with an empty feeling. This is the sort of film that has people commenting about they could never ever spill a secret they’re sworn to keep, and then in the same breath tell that secret to a stranger. It’s the sort of film that has flashbacks to something that happened five minutes ago. It’s a film that should have you asking, how the heck did this get made?