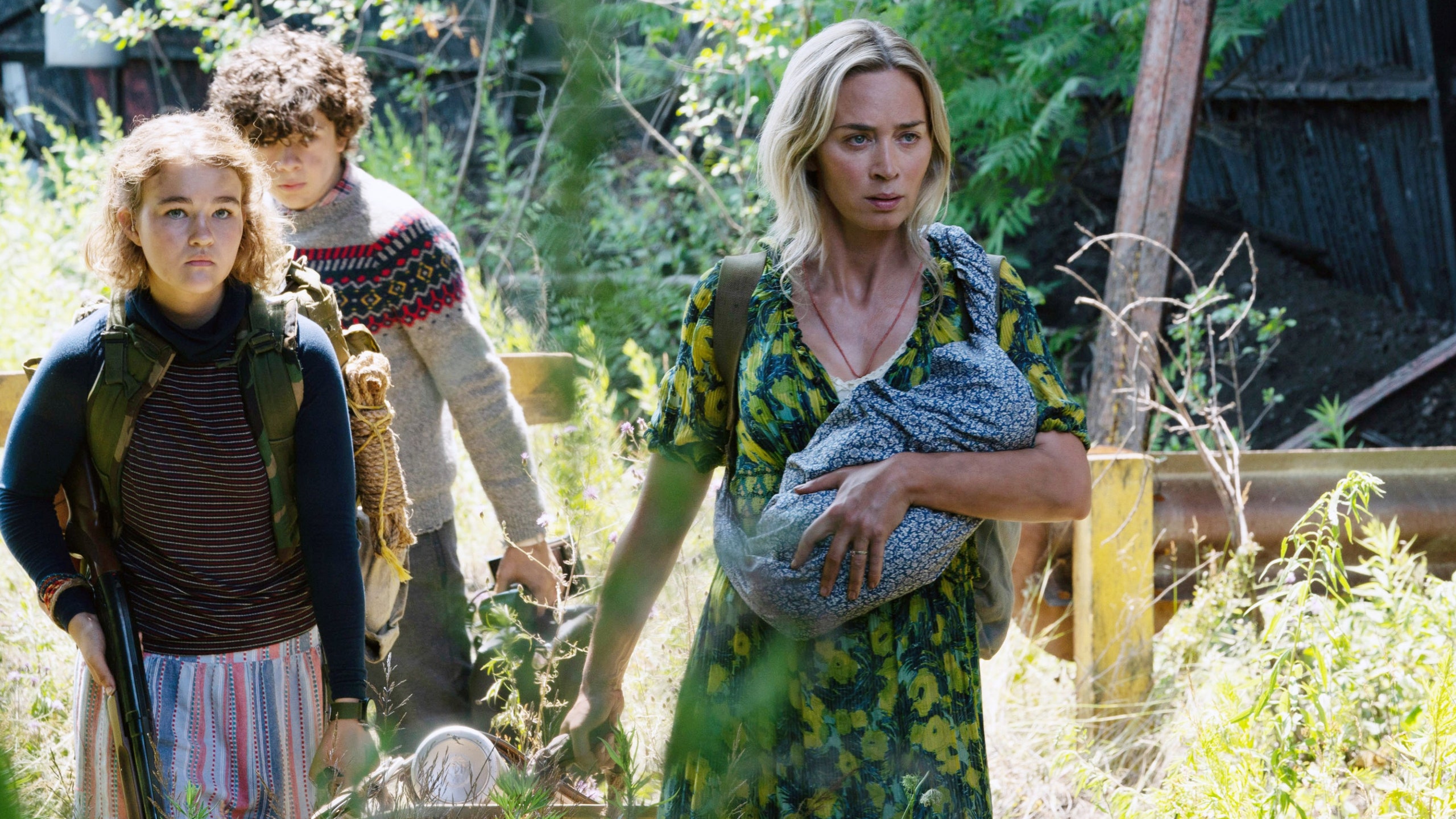 
It’s been a long time coming.

A Quiet Place Part II is finally here after more than a year of delays and postponements due to the pandemic. Paramount could have easily sold the film to Netflix like they’ve done for The Cloverfield Paradox, Annihilation (outside US, Canada and China), Eli, The Lovebirds, The SpongeBob Movie: Sponge On the Run (outside Canada), The Trial of the Chicago 7, and Love and Monsters (outside the US), but director, writer and producer John Krasinski and his other producers Michael Bay, Andrew Form and Brad Fuller stuck to their guns and refused a streaming debut. They knew its potential for enjoying it in a theatre, and enjoy it I most certainly did.

Part II picks up literally minutes after the first film ends, following the journey of the now-named Abbott family; Evelyn (Emily Blunt), Regan (Millicent Simmonds) and Marcus, as well as their newborn family member. They need to keep moving and find secure safety after their home was ripped apart by the sound-hunting Creatures who killed the father Lee (John Krasinski). They find uneasy refuge with an old family friend Emmett (Cillian Murphy), but Regan still wants to use her newfound “hearing-aid-amplifier” weapon against the Creatures. Her family cannot keep moving too far and risk their own safety, and the question is posed: how far are you willing to go to save others and whatever else is beyond a quiet place?

It was quiet fun to watch this sequel as it followed a cinema showing of the first film, turning into a de facto Quiet Place double feature. I always have enjoyed the 2018 predecessor, but was never as in love with it as most critics and audiences were. It remains a solid horror film with a great premise and interesting characters that works best because of John Krasinski’s surprising skill as a director, but there’s a few plot conveniences, gaps in the “keeping quiet” idea, and some open-ended parts of the screenplay that stick out.

Something fascinating going directly from one movie to the next is how the sequel is set mere-minutes after the first movie ends with Emily Blunt cocking a shotgun, but Millicent Simmonds and Noah Jupe have suddenly had massive growth spurts. Simmonds was 14 during the 2017 shoot for “Part I” and Jupe was 12. The children have aged 2 years in 10 minutes, but you only notice if you shotgun one movie after the other like I did. Simmonds and Jupe are still very young actors who look as such, and Krasinski didn’t take an alienating decision of de-aging children like the filmmakers did for It: Chapter Two. He believed in their performances and the belief is well-founded.

I’ll say this up front: I think Part II works better than “Part I”.

For one thing, Krasinski feels more confident as a director, no more evident than the opening sequence. We get a nerve-wracking flashback that shows “Day 1” of the Creatures’ invasion to this planet and how the Abbott’s small town was ripped apart in seconds by the aliens (now confirmed as such). Most of the sequence takes place within intricate and well-choreographed “oners”, delivering singular precision and thrills that make the Creatures terrifying in ways they weren’t, for me at least, in the original film.

As the story progresses from wrapping up the first movie’s cliffhanger, Krasinski doesn’t seek to take the characters to an extraordinary new place that feels wrong for the story’s world. The characters work through difficult problems as they happen, one step after another, and through this we have a simple and effective narrative of helping others even in a time of absolute disaster and desperation. Regan wants to use her makeshift sound weapon to help more people than her immediate family, something that she believes her father would have done in this situation. It takes a steady belief in a young girl’s determination for their new reluctant protector Emmett to go on a perilous journey towards salvation. We need to have faith in the children of the world if we are to survive past certain destruction.

Krasinski has said in interviews that he made these Quiet Place films for his real-life children, and the first was showing how much a father and mother would go to protect them, but the sequel sidelines Evelyn in favour of putting Regan and Marcus front and centre. Evelyn can do so much and power through childbirth in the middle of an attack by aliens, but she will ultimately have to let her children go on and do what they need to do. All of this builds to an incredible and moving climax where Regan and Marcus are composed perfectly with each other performing acts of tremendous heroism against certain death. It brought tears to my eyes to see how much Krasinski loves his children, real and fictional.

Part II also expands the apocalyptic world naturally, giving us glimpses into how other people have survived without sound or the luxuries of our real universe. The “others” that come into play are varied as all people are. We wouldn’t ALL turn into murderous cannibals nor would we all be lucky enough to survive in relative peace. We see both sides in terrifying and refreshing ways, but the threat still lives out there. By having more than one way to survive against the Creatures as well as Evelyn’s resistance against Regan’s quest, we are taught the lesson that giving up and being complacent to a terrible reality is no way to live. Humans can be terrible and wonderful in equal measure, and we must do all we can to survive.

Millicent Simmonds leads this film with a staggering amount of heart and commitment. She is a superhero in every way you could measure one and her deafness is never a crutch or a weakness. It is a part of Regan as it is a part of Simmonds, and even as she may stumble and fail, her quick evolution into a strong young woman is extraordinary. She is a truly incredible actress that deserves a secure future in film. Noah Jupe as Marcus also steps up to take a stronger role in the story and I have no doubts of this kid’s talents after Honey Boy. His emotional range is fantastic and you believe at all times in his desperation to fill the void left by his father.

Emily Blunt takes a lesser role in this sequel but gets more than enough moments to shine and typically does so with aplomb. Her Evelyn is delicate and careful with others, but always does whatever it takes to save her family, even if it means letting them go. Cillian Murphy is an excellent addition to the cast, with a powerful part to play and more than enough thrilling action to sink his teeth into. The power and intensity of his eyes when he first appears is overwhelming, but he slips so easily into emotional vulnerability that it takes just one pass of the camera to switch between states. Brilliant stuff.

And Djimon Honsou is there too and he’s always great.

I really did not expect to love A Quiet Place Part II as much as I did. I was rather nervous about a sequel to a well-liked movie that ended rather definitively and complete. Maybe the proposed sequel could’ve been part of an anthology of separate survival stories in this world, but Krasinski found a way to not only tell a continuation that’s just as thrilling and intense as before but deepens the characters and fleshes out so much more meaning for the story. And just like its predecessor, Part II is rendered with overwhelming beauty by cinematographer Polly Morgan (replacing Charlotte Bruus Christensen). Krasinski sticks again to the old-fashioned ways and has Morgan shoot Part II on 35mm with anamorphic lenses, which I’ll always love. Her compositions with the format are truly unforgettable, the flowing and rhythmic movements are electrifying, and horror movies should always look THIS good.

As for weaknesses, you could find a few. The pacing loses some slack around the middle, some of the twists and turns might have you clenching with fear of going too far, there are some location issues that could be picked apart, and Part II does the usual sequel thing of splitting up our main characters from each other.

But in more ways than one, this is a marvellous extension and successor to the first film. Krasinski proves how talented a filmmaker he really is, the characters are richer, the tension is greater, the cinematography is more beautiful, and the story flows with envious ease. A Quiet Place Part II is another perfect way to celebrate going to a theatre, enjoying the company of strangers, and getting completely wrapped up in the beauty of silence, and is one of the best films I’ve seen so far from 2021.

Writer: John Krasinski (based on characters created by Bryan Woods and Scott Beck)