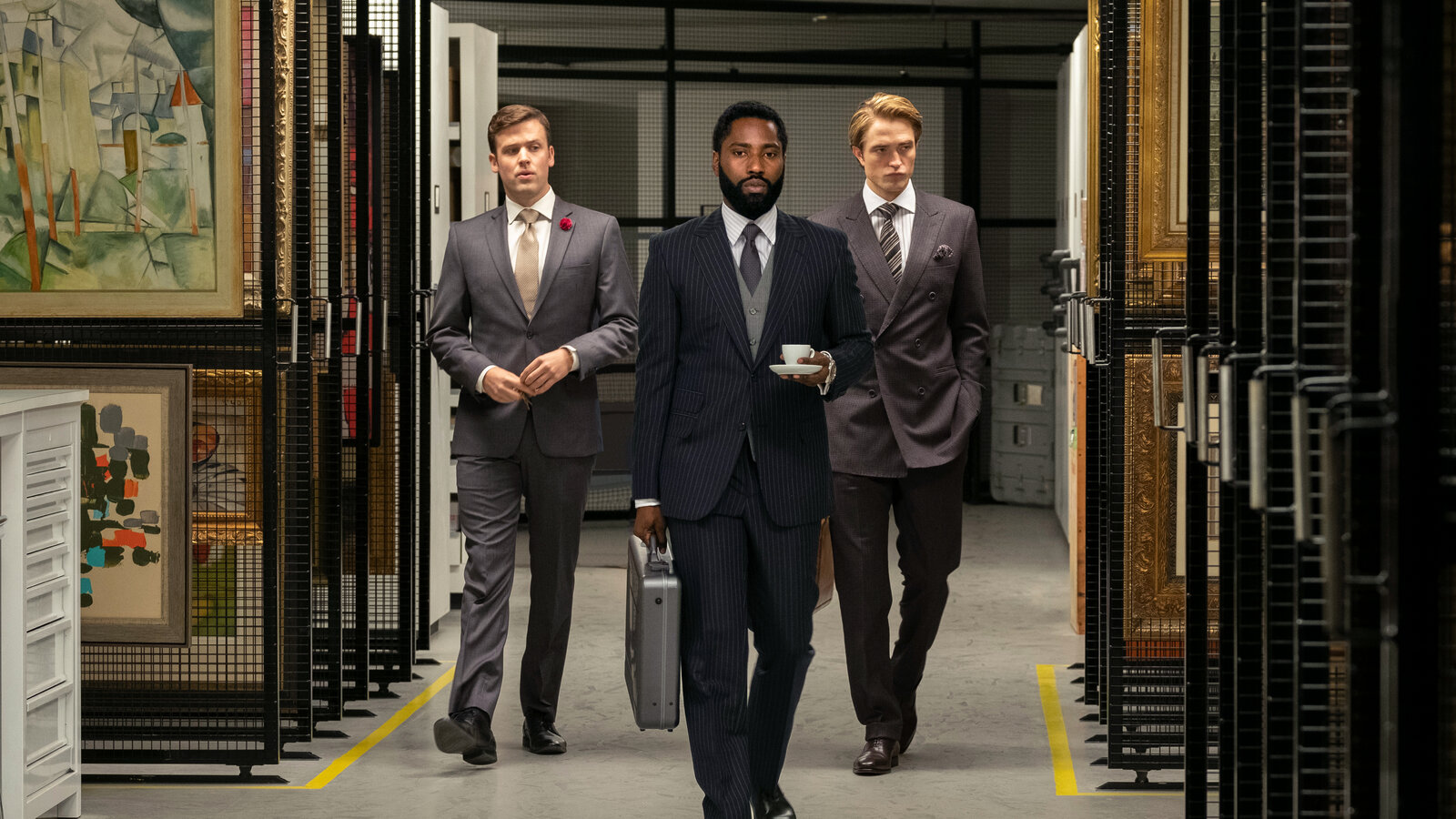 Tenet Review – Excess Impresses, But Leaves One Hoping for a Smaller Nolan Film

Most of what follows will basically be a “Confession of a Nolan Fanboy”, which is what I am. Christopher Nolan is the filmmaker I credit with actually getting me into movies as Inception hit me at the exact right time in 2010, and his filmography has defined so much of my own tastes with film and filmmaking. Particular compositions made by collaborators such as cinematographers Wally Pfister or Hoyte Van Hoytema, aural landscapes by composers David Julyan or Hans Zimmer, or by specific edits performed by either Doby Dorn or Lee Smith, have firmly planted themselves in my mind that they’ve defined and changed how I view cinema.

Tenet, in so many ways, is the great experience I always hope for with a Nolan film, but within that grandeur, it also is represents a crossroads to his future and what audiences will still accept from him.

At its core, Tenet is essentially what Christopher Nolan would bring to a James Bond movie, something he’s loved since childhood. Nolan seems bored with the standard Bond fare. It isn’t enough to him to just show a car chase or a gunfight and have a hero triumph over a villain through explosions or a magazine of bullets. To him, if you’re going to do a spy movie in 2020 that gets people in a theatre, it needs to be more than what we’ve already had. Granted, going to a cinema right now is incredibly risky to many around the world, but this was not made under the locked-down circumstances our world faces.

As creative minds explode on screen, the need to do more than follow a simple formula to drive people’s interest and imaginations is imperative. Time and time again I have sat down to watch a new film, be it a high-season blockbuster or a smaller affair and found myself bored by a consistent lack of ideas or competent follow-through on an initial premise. A truly unique film is a rarity. And when I say unique, I don’t mean the Valerian and the City of a Thousand Planets route of throwing something new at us every 2.5 minutes. I mean approaching crafting a new angle or forging new ground within a familiar genre or plot.

Tenet establishes the simple stuff that drives the plot and genre first; codenames, codewords, forces in the shadows, oncoming war, even the basics of entropy. Nolan uses this familiarity to slowly transition your mind to think differently about the familiar. It’s more than enough to ask people to accept a secret world of time-bending communication, but something else entirely to accept a new way of looking at time: backwards.

Nolan has always experimented and played with time throughout all of his films in some way or another, but the idea of going through the world backwards and forwards simultaneously, as well as playing with reversed footage to disorient the audience goes back to his big break with 2000’s Memento. The opening sequence of the film is the ending of the story played in reverse. In this way and this connection, I feel Tenet is less the next instalment in Nolan’s hefty filmography and more is a culmination of decades-long ideas he’s had, pulled into one film. And this where we have the crossroads.

For all of Tenet’s intelligent bending of time and its laws within scientific reason, it does lack a certain human element. While I can appreciate the perspective that the lack of a conventional humanity in the characters is a positive, as the notion of ‘fighting for the one/s I love’ or as in Dunkirk, ‘fighting for my country’ has been explored in Nolan’s previous films, Tenet is not Dunkirk or Inception.

Dunkirk worked remarkably well because it didn’t need to engineer an internal conflict in its soldier characters of ‘the girl from back home’ which has become a well-worn trope in war films. Dunkirk simply worked on the basis of small personal victories for small and insignificant people escaping a massive war which they cannot win alone. The emotional context, like victory, doesn’t come from individuals but from community and unity supporting one another. The characters in Tenet are fighting for the safety of the entire world, but they still lack a certain humanity at their core beyond slow-building brotherhood or one character being a mother.

Like Dunkirk, Tenet relies on more universal ideas of survival and heroism to engineer the humanity of our characters rather than family or names (John David Washington’s lead protagonist is literally named The Protagonist). At the end, we do care about The Protagonist not because his name really was “John” or “Jack” or that he has been saving the world to save his wife or children. He doesn’t need any of that. The Protagonist is enjoyable to watch because, like his father, Washington comfortably plays the role of a badass smooth-talking hero, with his unnamed, unknown soldier managing to save the world and change the path of the future.

Through paradoxes and unlearning that which you take for granted in this life, he sees what needs to be done in the moment, and what evil can be prevented for the good of us all. He is faced with the idea of letting the world burn simply because the future generations we destroyed demand it so. He sees how awful this planet can really be and how terrible the people on it can become when money and power are on the table. And, like John Connor of The Terminator, he is given a message from the future to resist the coming darkness, to do what he can as a man to train others and rise up against tyranny and extinction, and to also accept the things one cannot change. No-one cares about the bomb that didn’t go off. And so The Protagonist and the mysterious organisation of Tenet slip silently away into the shadows, never being known to us but always being there to stop the end of the world. If only.

It’s clear that Tenet has a lot on its mind, and Nolan uses that mindset to create an incredible spectacle. Villains in blockbusters of late have been consumed with the ideas of humanity being a plague and that climate change is either a divine way of saying we should be eradicated or that a new world order must be established. As such, this has become a tired, lazy, and irritating trope that I’m sick of. Tenet poses the same kinds of ideas as motivation for Kenneth Branagh’s villain, but asks simply what can we do about it. Instead of resorting to the hero punching the bad guy in the face really hard, our hero inspires others and trains them in the ideas of actually saving the world here and now, not worrying about what future generations will think. We have done enough damage. It may be time for a new world order, but only if people slowly accept such a thing. For now, it is up to individuals in unison to fight against an enemy they can’t touch or see. It is hard, but just like understanding how time can work both backwards and forwards, it can be done.

To go back to the idea of Tenet being a crossroad point for Christopher Nolan is to highlight this being the biggest and, most likely, most ambitious film yet. This is a 150-minute, $200 million, original idea blockbuster that was due to land in the middle of another expectedly successful American summer movie season. It is his largest globe-trotting film yet, shot in multiple countries and all centred around a lofty and headache-inducing plot destined to have yarn threads stretching off it on dozens of film-fan pages and YouTube channels. It is also loud, alienating and at times perhaps too much.

Its identity is forged in the grander and more universal ideas of saving the world, but also seems to forget that thematic core for about half the runtime as it wants to be a spy movie first, a time-bending blockbuster second, and in that order. It does feel like two scripts Nolan had been writing merged into one. While my mind was challenged, and I was entertained me on many levels, this is still a flawed piece of work. The sound mixing is an issue, the characters still do feel robotic at times, the end result may be a little too much to put together entirely for Nolan himself. I have no idea how mainstream audiences will respond to this.

Each of his films since The Dark Knight have gotten increasingly bigger than the previous one, and while they are entertaining, I’m starting to be concerned about Nolan’s overactive mind. I hope simply for his next to be an Insomnia or The Prestige-level smaller affair. I do enjoy Nolan’s increasing sense of scale, but the personal aspect of his smaller films is absent. Filmmakers like Kurosawa, Spielberg, and Scorsese have balanced their more commercial and large scale movies with smaller, personal pieces that never compromise the wonderful ideas that make their films so good at the core.

Tenet is an ably-performed piece of work, featuring stunning cinematography from Hoyte Van Hoytema, visual effects that expertly blend practical wonder and computer magic to make you think many times ‘how the hell did they do that?’, and remarkable adaptability from new Nolan collaborators composer Ludwig Goransson and editor Jennifer Lame, but I’m left feeling that I hope that this is the last massive movie we see from Christopher Nolan for a while.