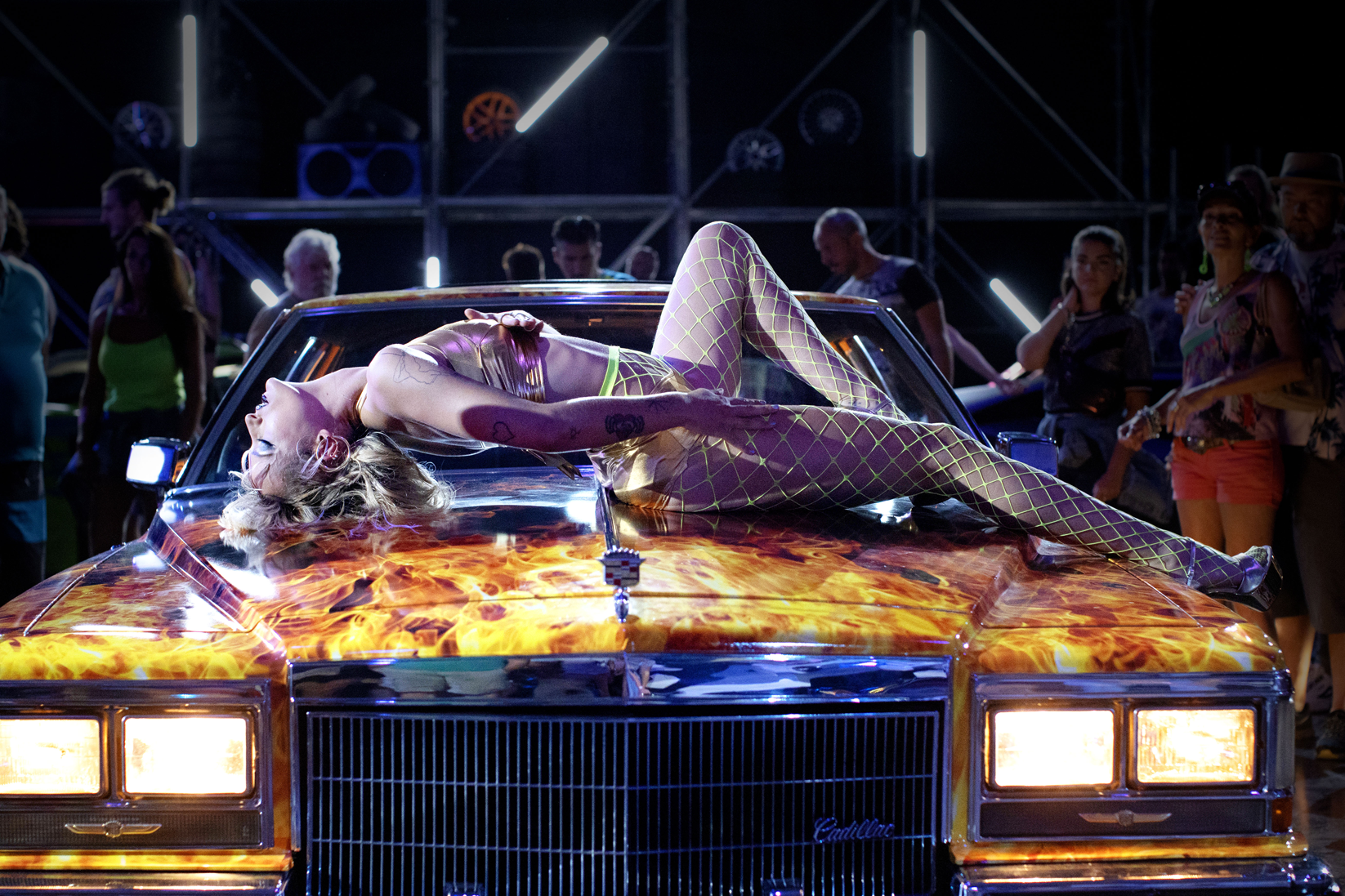 In Julia Ducournau’s Palme d’Or winning Titane, the director pivots from the visceral horror of her debut Raw for a somewhat quieter reflection on nature vs. nurture. Ducournau still employs grisly violence to great effect, however when the film turns toward a family drama (but one the director still makes eerie and disturbing) it becomes a more psychological affair as identities shift and come into conflict. It’s an unexpected swing but one that brings the film’s themes into sharp focus.

After a car accident as a child, Alexia (Agathe Rousselle) has a metal plate inserted in her skull and possible brain damage leaving her with violent impulses. She has also developed a sexual attraction to mechanical objects, namely automobiles, and supplements this with a job as a dancer at car shows. After she runs afoul of the authorities Alexia goes on the run and will do anything to stay free and soon ingratiates herself with Vincent (Vincent Lindon), a fireman who does not know who she is or what she has done to wind up on his doorstep.

To say too much of the plot would be to give away some of the surprises in Titane and the unexpected tonal and narrative shifts it takes over its runtime. The film begins as an ode to David Cronenberg’s Crash but then drifts into something quieter and less intense. Yet she still conjures a heady thematic brew, layering in questions of identity, family and sexuality that are thought provoking and well-realised. Only Ducournau could pull this off, showing she is a deft hand at upending expectations while letting the viewer bring their own perspectives and prejudices to the experience (there were a few walk outs at the screening).

Ultimately what Durcournau is concerned here with Titane is questions around who we are and what defines us. Are we the same person throughout our life, destined to be one thing or another, or can we change our nature? Is Alexia changed from her car accident or did that event unveil her true self? In the gender fluid 21st century, these are questions being asked every day and Titane offers us a way to view them from different perspectives. Maybe we can also undergo our own change in the process.

How do we examine an event so heinous that we can’t even look at it directly? How do we interrogate the multitude of factors that comprise an epic tragedy if the mere thought of it is too traumatic? Is closure possible? What about forgiveness? These are the questions at the heart of actor Fran Kranz’s directorial debut Mass, which attempts to explore the almost exclusively American phenomenon of mass shootings via a pair of mourning parents reopening old wounds with the hope of finally healing them.

Jay (Jason Isaacs) and Gail (Martha Plimpton) arrive at an unassuming episcopalian church to have a private conversation with Linda (Ann Dowd) and Richard (Reed Birney). They have met at the church as neutral ground, which has the air of some legal requirement or agreed mediation. What we quickly learn is one couple are the parents of a victim of a school shooting, while the other are the parents of the perpetrator. The victim’s parents want to understand how something like this could have happened, and maybe get some form of closure. While the gunman’s parents are also grieving and are also searching for answers to why their son could have committed such a terrible act.

Taking place almost entirely in one room with only the four actors facing each other across a table, Mass is a masterclass in acting. Each performance is rooted in authenticity and perfectly weaved together into an intimate tapestry of raw emotion. It is hard work to have four people facing their shared grief without wallowing in it. This isn’t misery porn, this is real pain, that must be confronted. While the pain is confronted, the event they discuss is never shown, only ever described or commented on by the characters, and by only having the tragedy experienced by the audience through the parents’ reactions to it, gives it even more power as we are left to imagine the horror and shudder at the thought of what human beings are capable of.

None of this would work, of course, if not for the performances themselves and director Kranz has assembled some of the greatest character actors working today. They each deliver four heart-breaking performances of equal intensity while never tipping over into histrionics. The men are terrific, with Reed Birney trying to hold down a strong façade although the cracks are clearly showing, while Jason Isaacs is a raw nerve, exposed and in pain. Ann Dowd shows again her versatility as a mother drowning in grief and self-blame and Martha Plimpton is utterly sublime as the mother looking to forgive but not sure if she can. It is Plimpton who carries the film through its most emotional moments and proves the success of Kranz’s approach: that we may not want to look at tragedy, but we must, otherwise there will never be an end to suffering.

Like the aforementioned Mass, Justin Kurzel’s latest examination of the dark corners of Australian society investigates a mass shooting indirectly. But unlike Mass, Nitram is looking at a real-life tragedy, the 1996 Port Arthur massacre, and attempts to triage the circumstances and events that led up to it, specifically the man who was responsible for it all. Out of respect for the victims, Kurzel avoids showing the event and never even mentions the killer by name, only ever referring to him by the nickname he was given in school, which also gives the film its title.

Nitram (a phenomenal Caleb Landry Jones) lives with his parents (Judy Davis and Anthony LaPaglia) in Tasmania. Nitram is a social outcast, he clearly has intellectual difficulties and no social skills, but he also has a mean streak, finding joy in the discomfort of others. One day he meets Helen (Essie Davis) a wealthy shut in who takes him under her wing. Gradually Nitram grows an affection for firearms (which are far too easy to acquire), at the same time as he becomes increasingly ostracised by the community and his own parents. These events will culminate at Port Arthur where he will kill thirty-five people.

There is an element of inevitability in Nitram. Knowing this tragic event will happen somewhere around the end of the film, the viewer can do nothing but watch things unfold, but on the way bear witness to the perfect storm that creates the men who commit these atrocities. Kurzel keeps us at a distance from Nitram, yet we are invited to look deeper. There is no philosophising or psychoanalysis, but by looking we might be able to bridge the gap between us and the man, not to empathise but maybe somehow to understand something about ourselves. Perhaps he had undiagnosed autism, maybe his parents were not attentive enough. Perhaps if the community had not shunned him, he wouldn’t feel the need to lash out. Or maybe he is just a monster. There are no easy answers here, but Nitram is only interested in the questions. It is not so much a film about a mass murderer but about the society that creates them.