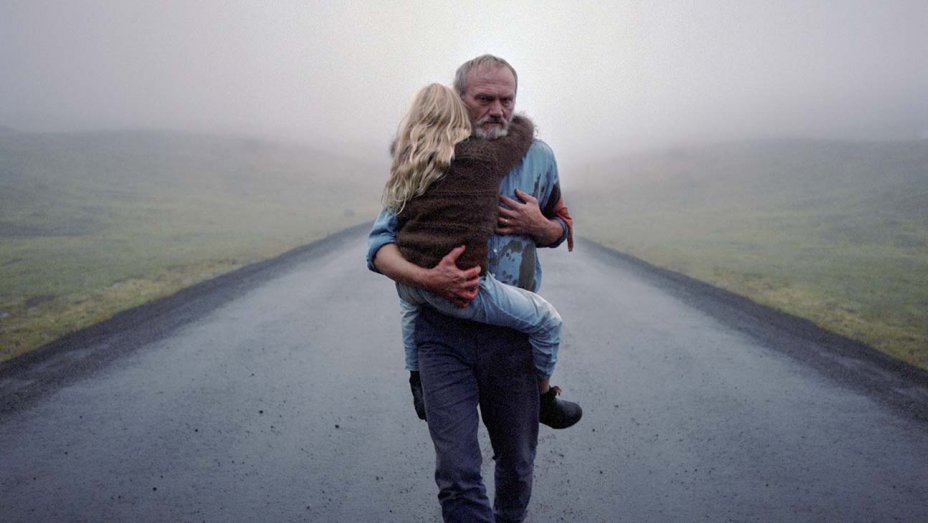 
Hylnur Palmason’s measured and patiently furious film A White, White Day may just be the finest film I’ve seen this year. This Icelandic drama gradually unveils its fractious fog of grief in a calm and considered manner, peeling back the narrative of mourning police officer Ingimundur (Ingvar Sigurdsson) as he sifts through the lingering remnants of life after his wife’s accidental death.

There is nothing obvious about A White, White Day, with cinematographer Maria von Hausswolff’s cameras observantly monitoring the cold and permanently rain-soaked Icelandic landscape. The opening scenes play out wordlessly, with a tracking shot of a car slicing its way through a fog before careening into a ravine. This is followed by a locked down camera watching a house change throughout the seasons; renovations take place as rain and snow assaults its existence, horses meander into the field, toiling the soil as they move and eat the grass. As the shell of the house changes, it stays the same, a homely shell that acts as an appendage to this planet we call home, tethered to earth until it one day is cleared away by time.

Time is a tangible entity here, with each second noting the unwavering path towards death that we all follow, and each minute carrying the weight of life uncontrollably seeping away from us. It sounds morbid, and laden with depression, but A White, White Day embraces loss and pain, acknowledging its existence and respecting its purpose in our own lives. Plot is inconsequential here, with it running underneath the film like a dormant river, moving along subtly, allowing viewers to absorb its presence through quiet scenes that slowly eke forward.

This kind of film forces you to be patient, to sit with its breathing pattern, to inhale when it inhales, to hold your breath when it holds, and to exhale with tears in your eyes when it exhales. There’s yelling, there’s screaming, and there’s pain, with Ingimundur railing against a world that tore the love of his life from their family, driven by confusion and anger, and the frustrating anguish of living. Ingimundur spends a wealth of time caring for his grandaughter, Salka (Ída Mekkín Hlynsdóttir), a sympathetic child who looks up to her grandfather, and feeds off his turbulent anguish. A powerful moment of conjoined rage has the two walking through a dark tunnel, yelling in pain and fear, vocalising a frustration with the world that feels all too familiar.

Death inevitably embraces us all, sometimes expectedly, sometimes with frightening immediacy, yet when it does happen, we leave a catalogue of a life unfinished, our own unresolved narrative threads floating in the ether. When Ingimundur finds a box of photos his wife took with her lover, Olgeir (Hilmir Snær Guðnason), his grief of losing her transforms into hate, as he notes the moments of intimacy and love that were spent with another, with the memories of a presumed good marriage dissolved in a tainted pool of despair.


And yet, as A White, White Day ekes its way forward, carrying us through the moments and memories that are driven by tangible notions of grief and masculinity, reminding us of every instance of possibility throughout our day, it does so with care and dedication to remind that the loss of one person has tangential effects on everyone they touched. For Ingimundur, his grief is singular, a powerful tornado ripping through the land, unwavering and uncaring for those who share his pain, yet writer-director Hlynur Palmason delicately supports each characters grief journey completely. Olgeir is a character we spend precious few moments with, but when we do see him, the mourning he lives within over the loss of a lover is evident and real. For Ingimundur’s family, who he intends to have live with him, their grief is saddled with the difficulty of trying to stay present and afloat in their own lives, all the while trying to maintain their fathers reserved mental struggles.

Help exists in the form of a therapist who reads routine questions from a sheet of paper. Ingimundur’s resistance to therapy feels all too familiar to men of older generations. In his mind, he sees the loss of his wife as something that will be ever-present, but that he’ll inevitably move past. One day ‘things will be alright’. It’s easy to see the impact of dismissive support on generations across the board, with countless quips about ‘something will come along’ or a ‘things will get better’ actively hampering any mental health progress. What ‘something’? How will ‘things get better’? Who knows. Ingimundur’s frustration with therapy and its inability to be an instant-cure to his pain adds to his unfurling anger. He is not always a furious creature, a monster, but that beast exists within him so purely that he is always, sometimes, a monster.

Palmason directs A White, White Day with devastating empathy, pulling from the work of filmmakers like Nuri Bilge Ceylan and Apichatpong Weerasethakul, and countless other ‘slow cinema’ directors. In one moment, Palmason pays homage to the masterpiece that is Once Upon a Time in Anatolia, with Ingimundur hurling a wayward rock down a cliff, allowing the camera to watch its tumultuous journey down the cliffside before it collapses with a splash into the river below.

Just like Nuri Bilge Ceylan, Hlynur Palmason engages with the inevitability of life and the certainty of death. Whether you believe in a variation on the creation myth, where Eve is created by God from one of Adam’s ribs, or if evolution is your belief of how we humans came into existence, sludging from the watery depths onto land and into our modern bipedal form, it’s clear that no matter what brutal birth into existence we went through, we are still complex creations that are eternally forced to reckon with who we are. We are complex entities that exist for a moment in time, living ravenous lives full of emotions, driven by the acts and moments of others in our direct and indirect lives, and then we cease to exist, becoming a memory to those who knew us, a footnote in our family trees, a momentary push forward for our genetic lineage. A White, White Day focuses on the impact of life on the living, and how cruel it can be to harness that life within our own minds and never let them grow and change with time.

This is an immense work, an overwhelming act of cinematic brilliance. It’s hard to escape a film like A White, White Day. It requests so much of you, presenting you with moments that will roll around in your mind, like a rock in the ocean, weathering down into a grain of sand. It becomes part of you, an ever present element of your mind, asking if you’ll see the world a little differently now. This kind of film is a rarity, and one you ought to submit yourself to. 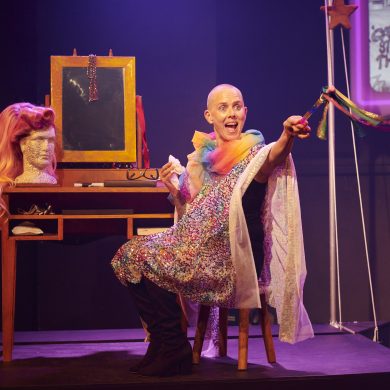