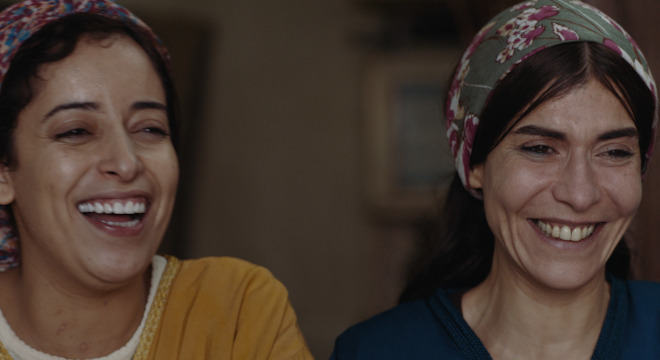 The curiously titled Adam (آدم) is the first film from Morrocan director Maryam Touzani, nominated for Un Certain Regard at the 2019 Cannes Film Festival. This delicate and tender film follows Samia (Nisrin Erradi), a young pregnant homeless woman seeking work and a place to rest for the final weeks of her pregnancy. After door knocking through Casablanca, being pushed away at each turn, she arrives at the home of Abla (Lubna Azabal) and her daughter Warda (Douae Belkhaouda). At first, Abla pushes Samia away, but as night falls and Samia takes shelter in a neighbouring door stoop, her empathy gets the better of her and she invites Samia in to rest.

Maryam Touzani’s direction pulls from the pantheon of European cinema that celebrates a calm and quiet, measured focus on routine day to day life. Abla’s home is also her place of business, with her running a small bakery that serves the locals with delicious baked goods. Touzani lets us sit with Abla’s daily routine of waking, ensuring Warda is given the support and guidance for her daily education, and then preparing the various pastries and breads for her shop. The arrival of Samia doesn’t immediately impede Abla’s routine, but gradually as her presence becomes ingrained in the household, Abla’s reserved nature starts to open up.

As a trio, Nisrin Erradi, Lubna Azabal, and Douae Belkhaouda, work effortlessly together to create a loving ode to the beauty of motherhood.

For Samia, she is a pariah, shunned for being a pregnant mother out of wedlock. We never learn who the father is, and Touzani ensures to never allow that be a question in our mind as her story progresses. Samia has decided to give her child up for adoption, a decision which proves difficult for her to grapple with the presence of this growing person within her. A moment of beauty between the young Warda and Samia has Warda celebrating the joy of a babies kick in its mother’s womb, all the while Samia tries to reckon with the reality of being a mother.

Nisrin Erradi’s full bodied performance is full of simmering observance, ever watching, ever learning, and ever knowing of when to encourage and push those who have afforded Samia with a moment of kindness and support. As her place in Abla’s home becomes more comfortable, smiles becomes more frequent for this small family, and life is breathed once again into the home that at times feels like both a prison and a sanctuary.

For Abla, she lives life as a widow, denying herself the opportunity of being free to express herself because of the grief she holds onto so devoutly. Her life has become a monotonous routine, one that exists in service of raising her daughter to be the best person possible. Lubna Azabal’s performance is one of stoic excellence, with her showcasing a life lived behind eyes that do their best to hide her sorrow.

Additionally, Douae Belkhaouda’s Warda is a ball of charming glory, lifting Abla’s household up with the sweetest of whimsy and a welcome amount of youthful energy. Abla named Warda after Algerian singer Warda Al-Jazairia, and while Adam is predominantly musically absent, it’s Douae’s performance as Warda that brings the lightness of a song to the film. In many ways, her Warda is the childlike mother to Abla, keeping her afloat and alive through her quiet life, being the reason for Abla to continue on.

The heavy quiet that is draped across much of the first half of Adam almost becomes too leaden for the film to behold, with the film wallowing in its silence a little too much at times, but doing so, it sows the seeds for emotional beats that strike a deep chord and resonate loudly as the final third comes to life. When Samia discovers a hidden box of Warda cassette tapes, and she plays one of her vibrant songs, Abla’s hidden vitality springs to life. This leads to one of the most heartwarming and emotionally rich dance scenes in a modern film, with Samia and Abla embracing each other in a way that only two single mothers could.

For Abla, her solitude as a widow is respected and cared for by society, but for Samia, a mother to be, alone in the world, her presence is to be shunned, as a scar on society and on those who care for her. Thankfully, this repression is never deeply explored in Adam, and just like the masterful Portrait of a Lady on Fire, Touzani guides the narrative away from expected drama, leading viewers towards new perspectives on traditionally masculine perceived tales.

Virginie Surdej’s cinematography embraces the actresses completely, allowing them to reflect on their changing bodies. There are echoes of Emily Mortimer’s Elizabeth Marks in Lovely & Amazing here, requesting a man to critique her naked form, yet instead of an act of excoriation, Touzani’s considered direction and guidance has carefully allowed for a place of celebration of ones own body. In a later moment of renewed freedom, Abla undresses herself in front of a mirror, and sees herself truly for the first time in an age.

As the film closes, as too does the relationship of motherhood, as Samia breastfeeds her newborn child. Surdej, Touzani, and Erradi, equally embrace this moment completely, with it feeling both like a defiant act against the repressive regimes that dictate how women’s bodies should be presented in public, as well as a calming moment of bonding between mother and child. This moment alone could be the point where Adam reaches its emotional pinnacle, yet, that would be ignoring the nourishing role that food plays in the community at large.

With Abla’s bakery, she manages to provide another motherly role for her fellow Moroccans, that of enrichment for their souls and their minds via good food. Abla’s baked delights are some of the finest on screen, evoking memories of Kirin Kiki’s kind Tokue in Naomi Kawase’s Sweet Bean. Each movement of the dough, each finger push and pull of a thread of pastry, each kneading knuckle, all remind how much heart and soul goes into home cooking and baking. Samia’s eventual presence in Abla’s kitchen reinvigorates the lost recipes that Abla no longer makes due to their time requirements, and as such, she highlights the artificiality of commercially produced baked goods. They simply don’t have the heart or humanity that a home baking does.

While I’m deeply unfamiliar with the cinema of Morocco, I am grateful that a film like Adam allows me to see an aspect of Casablanca and those who live there that I didn’t know existed. My Western eyes are often deceived by their predominantly Anglo-Saxon roots, and as such, I’m enriched and nourished by other stories and perspectives when they challenge and transform my worldview. Adam is a quietly kind and empathetic story that embraces the importance of caring for those in need, and as such, whatever stories that Maryam Touzani wishes to tell, I know that I’ll gladly invite them into my life to enrich my soul.