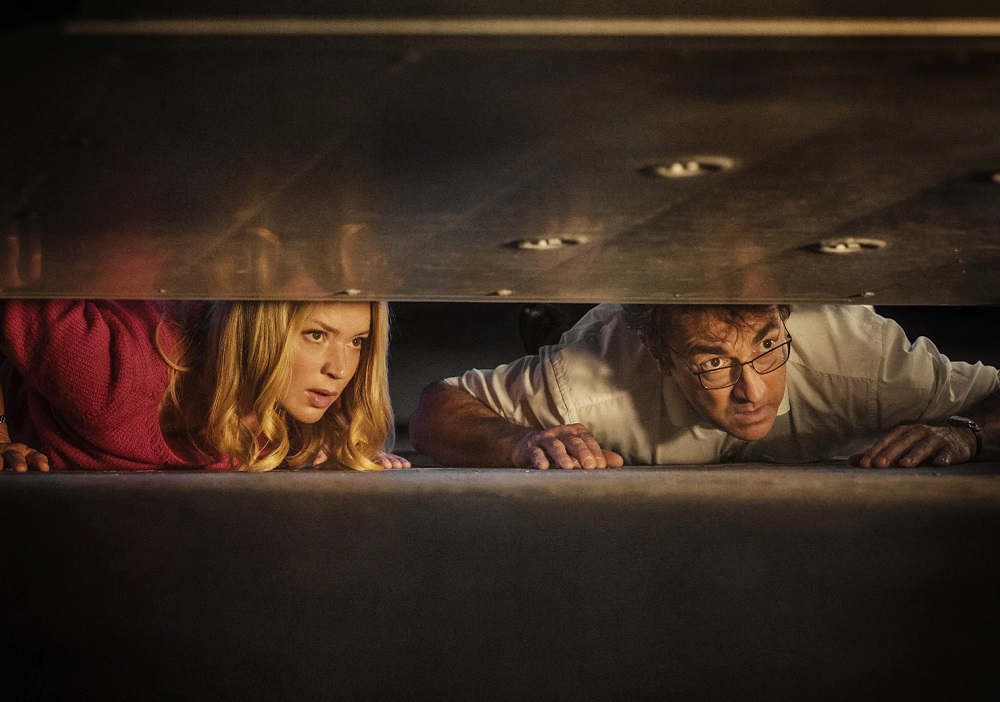 
There are clear throughlines weaving their way through the work of Albert Dupontel, from his very first feature (Bernie) to his latest film Adieu Les Cons. His characters are often outsiders pushing against the confines – of society, of expectations, of so-called normalcy – and regularly find themselves thrown together or thrown into an adventure in ways that invert their world. Dupontel himself too pushes against confines with his films, against those of genre, form and focus.

Dupontel often attempts a fine balancing act between darkness and humour (reflected in Adieu in the chiaroscuro lighting of cinematographer Alexis Kavyrchine) with writing that, as his camera often does, moves or frames in an unexpected way. Adieu bounces between themes and genres, between melodrama, satire, tragedy, romance, mystery, and dark surreal humour. It’s a highwire act of serious themes in a slapstick manner and, once again, it’s one that Dupontel largely manages to pull off. The audience is pulled along by the energy and visual flourishes, yet is anchored to the film by a strong central performance.

Suze (Virginie Éfira) and Jean-Baptise (Dupontel) exist as dichotomies of life – life refused to one and rejected by the other. But, when they’re both at their wits’ end, they are thrown together and a journey – a revolt – against the system becomes the only escape from a world in which they feel marginalised, that’s become absurd and unfair to them. A terminal diagnosis for middle-aged Suze has sent her on a search for the child she was forced to abandon when she was 15. In her administrative quest she crosses paths with Jean-Baptise, witnessing his attempted sucide (after being removed from his life-defining job) turn into an accidental co-worker shooting. The only one who can vouch for his side of the story, Suze forces Jean-Baptise to use his Internal Affairs IT skills to find the son who was given away before she’ll help clear his name. It’s a journey that finally brings the pair the sensations they’ve been missing or denied themselves, the feeling of being alive, of being useful.

Surely heavily influenced by Terry Gilliam’s Brazil (who makes his third Dupontel film cameo), Adieu shrouds its critiques and Dupontel’s perceived incompetence’s of French society – from its government and its bureaucracy, to its violent police force, blanket digital surveillance, anonymising architecture and dehumanising system – under the guise of a burlesque comedy. Much like its inspiration, Adieu can throw the viewer from one end of the emotional spectrum to the other with little warning.

However, it doesn’t always give itself the space to explore in depth, and its dual conclusions don’t feel wholly earned due to the lack of time it spends developing the crucial relationships. But the pace of the film, its energy, inventiveness and the myriad subjects it touches upon make this feel like a more passing concern. It’s a concern also sidelined by Dupontel’s wise move – as he’s done in the past – to surround himself with more talented actors. Efira’s performance brings the difficult to master empathy, the delicate balance of anger, love and desire to make a difference to her character.Nicolas Marié meanwhile brings a lightness of touch, an irreverent screwball energy as a blind archivist desperate to join the adventure.

Adieu Les Cons is a frantic farce. A high-energy, comedy mystery quest with dark and philosophical undertones but that, like all good French fare, has love at its heart.

A Letter to the President – Adelaide Film Festival Review