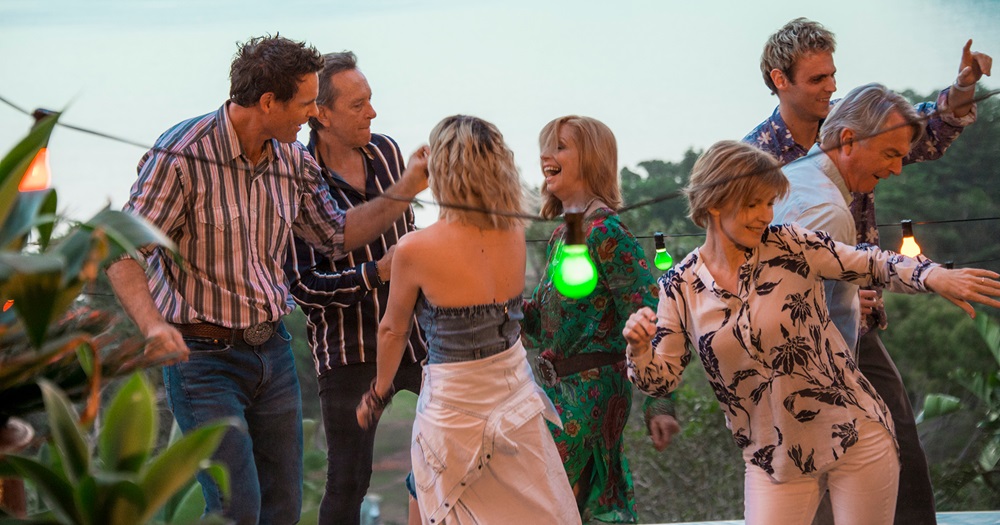 For the majority of film reviewers in Australia, Palm Beach is not a film aimed at them. With a huge wealth of older reviewers having been costed out of the industry due to decreasing wages and because of no-cost upstarts like myself, there remains a field of Gen-Xers and millennials who spew out words as best as they can, and slap the label of ‘criticism’ on it. For them, it’s easy to punch down on a film like Palm Beach – a movie that celebrates the boomer generation, a film that celebrates financial success and white superiority. Palm Beach is not a film for most of us reviewers out there, the thirty to forty somethings who hold a grudge against the older generations for, well, everything that’s happened to this planet.

And, y’know what, that’s perfectly fine.

Co-written by Joanna Murray-Smith and director Rachel Ward, Palm Beach unites lifelong friends Bryan Brown and Sam Neill once again, alongside such well known faces as Greta Scacchi, Aaron Jeffery, Heather Mitchell, Jacqueline McKenzie, and as the token Hollywood actor getting a paid holiday in Australia, Richard E. Grant. The plot is simple – Bryan Brown’s Frank is having a birthday, so with his excess wealth, he’s jetted in his old bandmates from around the globe to come have a good time with him. As expected when a bit of booze gets thrown into the mix, there’s a couple of minor altercations that cause some drama that will naturally be resolved about five to ten minutes before the credits roll.

We’ve seen this before – namely, it’s pulling from the same duck pond that The Best Exotic Marigold Hotel and Finding Your Feet came from – and under the direction of Rachel Ward, there’s really nothing exceptionally new within Palm Beach. Which is why it’s so easy to pick apart, and also why you’ll see a lot of punching down against this film from other reviewers. Look, it’s considered uncouth to rag on other reviewers in your own review of a film – after all, I’m here to talk about Palm Beach, not what my fellow critics have to say about a film – but, I do feel I have to defend Palm Beach a bit. Yes, it’s a film about privilege and it sure is as white as the Bonneville salt flats, but it’s also a film that holds some value and importance for Australian audiences and Australian cinema as a whole.

A year ago I wrote about the importance of making films for the ‘grey dollar’ market in Australia, and it seems fortuitously, Palm Beach has stumbled along to help fill the market for the older Australian audiences. As I mentioned in that piece, diversity is important and necessary for the art of cinema to evolve, but the harsh reality is that diversity doesn’t exactly light up the box office. So, when a film like The Best Exotic Marigold Hotel makes $21 million at the Aussie box office, it makes pure sense to try and chase that audience with a film that’s marketed directly towards them. Palm Beach is jam pack full of trademark moments that make films like this so enduring to older audiences – there’s a pumping soundtrack that transports viewers to their youth, there’s countless scenes of lamenting how times have changed, there’s endless reminiscing about the past and how good things were, there’s the celebration of family, with a keen focus on kids and grandkids.

The generic setting of a reunion at a birthday party is ripe for all kinds of relatable motifs, and yet, Rachel Ward and co. know how to make those generic moments feel real and genuine. It’s not surprising then to know that many of the moments are pulled from real life, with both Ward and Bryan Brown’s real life relationships being mined for both comedic and dramatic beats that carry some weight. It’s this wading pool depth that helps make Palm Beach much more than just an older version of an Adam Sandler and friends film (it’s not hard to imagine the Venn diagram where Palm Beach overlaps with Grown Ups).

Palm Beach never properly interrogates what it means to be an early retiree, never fully digging its fingers into what it means to be a boomer in a society where they have become the villains of the world, but it at least does touch on the unexpected fragility of men. Frank lives with anxiety and depression, and yet, terrified that he’ll appear weak if he talks about this with anyone else, he hides his medication away in his man cave. He worked hard to be able to afford the luxury of retiring early, but now in the throes of retirement, he finds himself devoid of purpose and relevance. The friendly familial jabs about him being a cranky old bugger thrust at him at his birthday dinner hit like powerful barbs, piercing his once impenetrable exterior.

The characters here have to grapple with the realisation that they’re growing old and that life isn’t what they thought it would be. Heather Mitchell’s actress Eva is coming to realisation that she’s only able to play the role of a grandmother now, while her partner Billy (Richard E. Grant) has come to realisation that the music his band made back in the day is only profitable when applied to a incontinence pad ad. Less focused is the alcoholism that Jacqueline McKenzie’s Bridget is saddled with. She drinks endlessly, but surprisingly, this is never commented on, with it instead becoming clear that this is a group of people who wilfully ignore problems that exist directly in front of them. Greta Scacchi’s Charlotte is processing her ageing attractiveness to Frank after her breast cancer surgery. And finally, Sam Neill’s Leo is reckoning with a fling that he had with Charlotte some twenty years ago.

If this all sounds deep and contemplative, then Palm Beach wants to assure you that it’s far from that. Instead, it operates in the mildly vague wheelhouse of familiarity, and it does so with an earnest air of light heartedness. And that’s why this is an important film. This is for the older audiences, the 10am on a Monday morning crowd who head along with their friends for a social outing followed by tea and coffee. As the credits roll, you can almost hear their chatter as they shuffle out the cinema, with their remarks about how their partner is like this and how relatable that was.

I want to add – to my fellow film critics, you’re not wrong. I’m not dismissing your views on this film as everything you have said is right. It is all of those things that you say it is, and a little bit more, and maybe I’m pandering to an audience that doesn’t require pandering, but is there not value in telling these stories for an audience that is craving them?

Yes, it’s a film that celebrates privilege, and yes, it’s an exceptionally white film, but Palm Beach is a film that delivers for the market that is craving this kind of material. Namely, a market that will pay to go and see movies in the cinema to see themselves on screen. For that point alone, I celebrate the existence of this film. I celebrate its deceptive mediocrity, and welcome many more of these films in the future. For the Australian film industry to thrive, we need these kinds of money makers – the films that help make the diverse content possible.