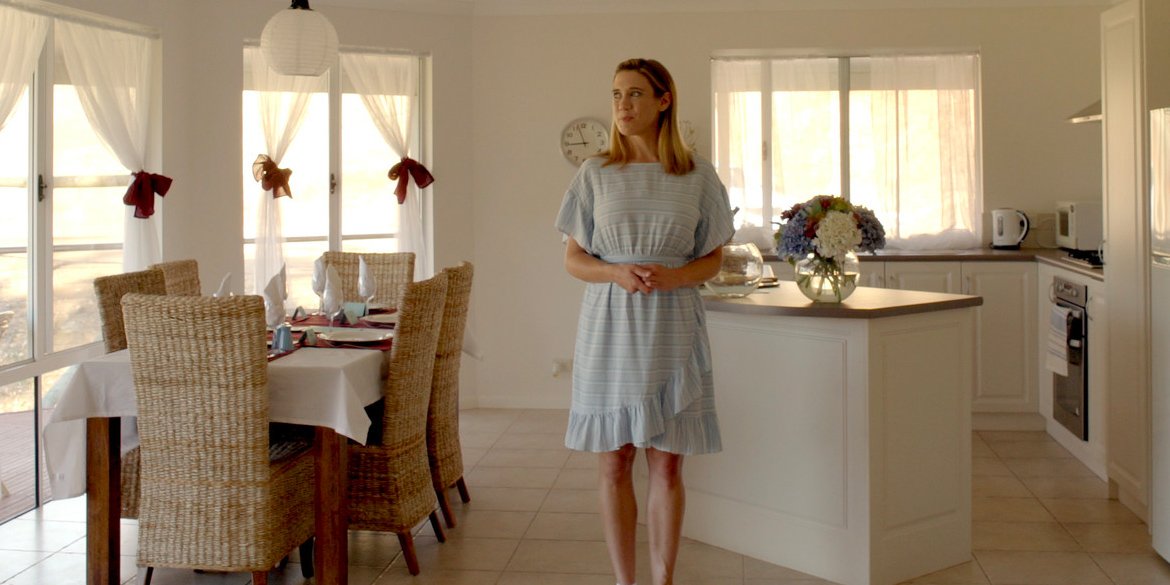 
An Ideal Host is playing as part of the Sydney Underground Film Festival, from Sept 9 to Sept 26 2021. Details here.

An Ideal Host starts off-kilter as Liz (Nadia Collins) and Jackson (Evan Williams) rehearse a proposal to be played out after dinner the next night in front of friends coming out to their hobby farm somewhere in the Australian countryside. Liz is understandably stressed out and excited about the prospect of entertaining; she has the full day and next morning planned out to the nth, her phone set to alarm reminders. The table and kitchen has to be Instagram-ready, even if it means redoing everything three times, with zero help from Jackson. When the guests arrive, along with an uninvited old frenemy, our plot arc is set up to be one of revelations and imploding relationships, all that Stepford wife perfection guaranteed to disintegrate.

But Robert Woods’ sci-fi horror comedy takes a different gleeful path. Nadia Collins does nearly all of the heavy lifting, taking Liz from inward screaming panic to outward screaming panic to finding her power. Naomi Brockwell’s performance as frenemy Daisy is a damned joy. In a millennial group of blands and fakes, Daisy is the only real character, and her needling of everyone, Liz in particular, is thrilling to watch before the plot kicks in. I don’t think I was imagining a certain queerness to their history but of course they could also have been “just good friends.” Either works.

With this bunch of old school friends (and one Grindr date), there’s a recognisable pattern of resentment between the ones who left and the ones who stayed and the ones who came back. I liked that aspect very much, particularly the frustration of long-time friendships. Hashtag relatable.

Though the relationships get mostly discarded, the dialogue and reactions get really fun when the big reveal happens. The confusion and humour is thoroughly enjoyable, throwaway lines and jokes very much in the style of Paul (2011) but not as genre-heavy. (I’d mention the obvious scifi movie connection but that would spoil the whole plot so nope.) There are two great references to the specific Strayan experience of dealing with huntsman spiders which made me grin with recognition.

True, the opening scene is alarmingly lo-fi indie with its stark lighting and bare walls. But the cinematography improves with some nifty camerawork in long circular unbroken takes at crucial moments, and some gorgeous colour-grading. The Australian night sky and bleak golden dry paddocks are put to good use in their terrible beautiful isolation. And the score is wonderful, veering from a super ironic jazzy vibe to roaring horror drone to a glorious orchestral crescendo.

The film goes a trifle overlong, and the comedy recedes as the plot goes into full slasher mode. The final act gets amazingly gory, with some very impressive effects and some not so great. Possibly a point was being made with the specific gender and queer representation of killers v killed, but that didn’t seem overt or even deliberate. The emotional stakes lessened as the film went on – I found I didn’t really care about our final survivor though I appreciated the full circle humour of the closing scene.

Still a mostly delightful sci-fi horror comedy for those of us who love the genre.