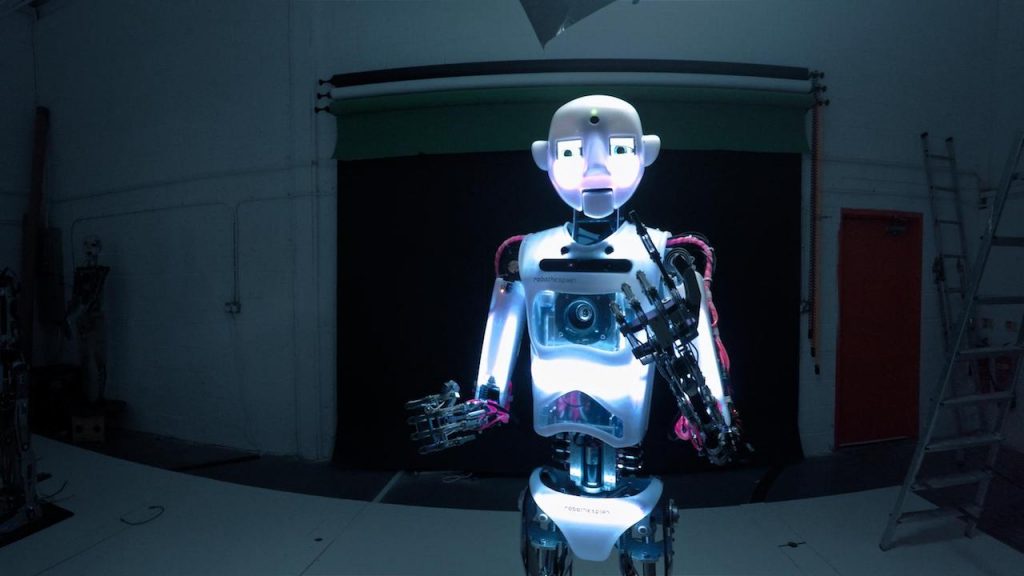 A perennial question raised by science fiction has been that of whether the rise of Artificial Intelligence and its existence in society will cause the cessation of humanity as we know it. Pick up any formative science fiction writer, and the subject will have been explored to its terrifying conclusion. Directors Tommy Pallotta and Femke Wolting step outside the world of fiction and explore the reality of Artificial Intelligence in the documentary More Human Than Human.

Complacency has become the normality of society. A little over a decade ago, the notion of having the world in the palm of your hand within a device that could also take photos, and in turn, tell you the exact spot in the world you took that photo, and what the temperature was that day, as well as the exact same device being able to talk to you and carry on a (albeit stilted) conversation, well, the notion of that device would have seemed impossible and fantastical. But, the iPhone exists and the world changed with it. The notion of magical technology has seemingly been surpassed, so much so that the third of Clarke’s three laws appears to have been broken.

Any sufficiently advanced technology is indistinguishable from magic.

These devices we hold so dear, that ‘connect’ us to the world, and tether us to a digital society that is still establishing its rules and regulations, have long lost their wonder and mystery. They exist as third arms, extensions of who we are as people, constantly surveying, always watching, and always gathering information. Yet, one day the technology that exists within your humble iPhone or Android device may put you out of a job. More Human Than Human suggests that this day is tomorrow morning.

This notion should be terrifying. It should be one that has world leaders meeting to discuss what they will do to help future proof society and stop the rush for automation. After all, there are 8 billion people on the planet, and yet, the push from major companies like Amazon and Uber (and just about every other company that wants to avoid dealing with pesky humans who have rights and needs) to have a fully automated workforce is well and truly underway. Sure, the notion that you may soon get your mail via a drone sounds interesting, but the employees left out of a job because of a flying machine may be less thrilled about the prospect of no longer being able to feed their family. Amongst the plethora of questions that need to raised regarding the issues of the world at large, high up on the list needs to be the question of what the heck are we going to do with a growing world population and a decrease in employment opportunities?

More Human Than Human doesn’t have an answer to this question. Instead, it raises even more questions that will leave you feeling just a little bit queasy afterwards. Unlike the industrial revolution, or really, any revolution that came before it, the digital revolution is one that is partially built on the basis of distancing humanity from work. Where the industrial revolution had a need to keep people involved with each process, the digital revolution is a natural evolution of this and a prime result of capitalism – productivity and profit is key, and employees are two of the guiding factors of these things. Take them out of the equation and you’ve got a workforce that can theoretically run forever.

The one question that More Human Than Human does endeavour to answer is: What happens when the Turing test has long since been passed?

One man who has made a career studying artificial intelligence finds himself tricked by a computer in ‘Russia’, having been lead to believe that he had been having a conversation with a pen pal. The email communication had been going on for some time, only for him to realise that he had in fact been talking with a program.

In other areas where Artificial Intelligence has been employed, and the Turing test has not been passed with this iteration, we’re left to ask – what exactly is the value of being human? And, if there are so many of us, then why are we relying on androids to provide comfort to elderly folk, instead of utilising the wealth of people in the world to help address the growing issue of loneliness. Even more unsettling is that in this increasingly ‘connected’ age, there are a reported one in three adults affected by loneliness, leading to depression, anxiety and other mental health issues.

Stephen Hawking left us with the warning that future developments in AI could ‘spell the end of the human race‘. And yet, he relied on early AI technology to assist with talking. With high-tech prosthetic’s being developed that help amputees by creating a ‘muscle memory’ and working alongside the wearer to allow them to live an able bodied life, it’s clear that there is a practical and helpful use for Artificial Intelligence in society. Or the young autistic boy who has a meaningful relationship with Siri as she is able to answer the questions that his mother cannot.

Once the interview takes place, it’s immediately unsettling with Tommy Pallotta sitting in front of the two cameras and finding the ‘interrogation’ techniques a little oppressive. It’s almost as if these cameras only watched Errol Morris documentaries, what with their inquisitive manoeuvring and questioning angles leading to a sweaty, uncomfortable Pallotta in the spotlight. Earlier, Richard Linklater and Billy Crudup declared that their careers as filmmakers were safe given the erratic nature of the AI.

Max Tegmark once declared that ‘everything in the universe is made of math‘, but clearly (at least in this documentary) art is something that cannot be created with a formula. There’s a nuance that the Robert De Niro wannabe RoboThespian simply cannot embody. The art that is created via Artificial Intelligence looks nice, but lacks the warmth, or the humanity, of a human created photo or portrait.

The warmth of humanity generally carries alongside it an implied level of empathy and understanding for fellow human beings. Yet, in vilification of minority groups, demonisation of refugees, and the apparent apathy to the growing issue of climate change, one has to wonder, will human created Artificial Intelligence be able to correct the errors of humankind? If art cannot be programmed, what suggests that care and sensitivity can be? In turn, what is the use of creating Artificial Intelligence to solve the problems of today, in the future?

The ethics of Artificial Intelligence is a complex one. Why are we playing God, creating beings that are – theoretically – supposed to be more ethical than humans. In turn, these beings will phase out humans, with the white collar, working class roles being some of the first to be phased out. The decidedly human focus of Artificial Intelligence then raises another ugly unanswered question – what of the non-human entities living on this planet? What of the animals of the world? Will their existence be programmed into Artificial Intelligence, or will they also be phased out with robotic replacements, bringing the world closer to the science fiction realm of Horizon Zero Dawn?

Thanks to the great minds of the world and the countless science fiction writings out there, we’re well aware of the problems of Artificial Intelligence. Yet, why can’t humanity evolve to be more empathetic? We’re so self absorbed with our own existence, that we simply must replace ourselves with smarter, better versions of us. It needs to be said that we, as humans, don’t treat other animals equally – too many seagulls and they get culled for being potential harms to their environment -, and yet, because of our intelligence and verbal emotional capacity, we simply won’t address the greatest problem facing our future – overpopulation.

Maybe I’m being an alarmist. Maybe I’m encouraging eugenics. Maybe I’m simply left with too many questions after More Human Than Human and not enough answers. Which, to be fair, is the main issue with the film.

It’s interesting, it’s engaging, and certainly, if you are curious about the digital revolution and the future of the world (whatever that may be), then this will encourage a lot of discussions and kick off an endless rabbit hole of Google searches. But, it also doesn’t really raise anything new – it simply compiles all the questions raised throughout the years and asks them in order. There’s a lot to gain from this film, but at just under ninety minutes long, you can’t help but wish there were even more explored.

Maybe the now citizen of Saudi Arabia, Sophia, can use her spare time to help tell her past and future and make the first Artificial Intelligence documentary?