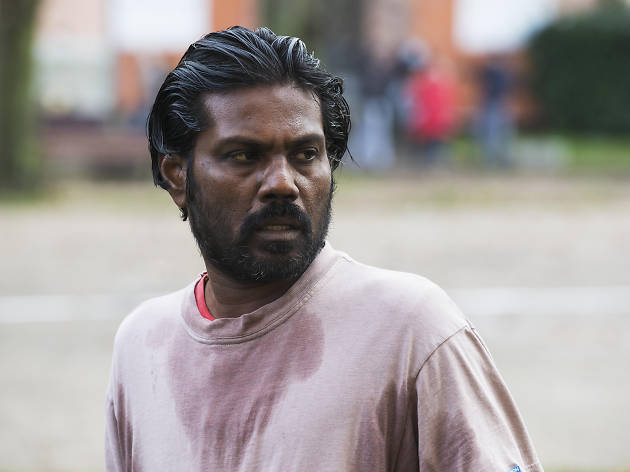 Jacques Audiard’s seventh film, Dheepan, could possibly be his most important film. Focusing on one of the most contentious issues in the world today – refugees and war enforced migration – Dheepan is a distressing film that easily sits alongside John Crowley’s Brooklyn and James Gray’s The Immigrant as timely essays on what it means to move away from your home land and to a foreign country. The central cast is made up of mostly first time actors – Jesuthasan Antonythasan as the titular Dheepan, Kalieaswari Srinivasan as Yalini and young Claudine Vinasithamby as Illayaal.

At its core, Dheepan is a film that follows a plot you’d most likely see in a gangster film following the old adage ‘just when I thought I was out, they pull me back in’. Starting in Sri Lanka, we’re introduced to Dheepan and his make shift family who are delivered to France by the people smuggling boat they’ve employed. Thanks to some acquired passports, they are resettled in a country town where Dheepan is made the caretaker for an apartment complex.

A lot of the finer details of who Dheepan is and his relationship with his family is is best discovered in the film itself. The elements that can be discussed without spoiling too much may seem bland on paper, but are in fact great character building elements. Take the youngest member of the family, Illayaal, and her attempts to assimilate within her school – these scenes don’t just show how difficult it is to start at a new school and try and make friends, it also shows how refugee children are treated by other children when trying to start a new life in a new country. There are moments that are heartbreaking here, but alongside that there are moments of joy and happiness as well.

There’s no hiding the fact that these characters have come from a violent life, with many having lost family members. So, when the eventual violence erupts and threatens to destroy the lives of Dheepan’s family, it is understandable – even if it suddenly turns into Dheepan: Action Hero. After all, Dheepan essays not only how the resettlement process works, with the already disadvantaged being relocated into a place of unrest – government housing.

Dheepan manages to deconstruct what it means to be a refugee in a new country and delivers it in an understandable and relatable manner. You never entirely know what Dheepan and his families history are, which for some may be a bother, but in fact it makes their relationship and story all the more sympathetic.

The other aspect of the core characters within Dheepan is that they’re never victimised or turned into evil people. They are simply people who want to survive and make a new life away from the trauma that they previously lived in. Essentially, they want to give their ‘family’ the best chances they can have.

Which brings me back to the explosive finale. Part of me loves the audacity of the way this film concludes, but then also part of me is disappointed that it ventures down the path it does. It does raise some interesting questions of whether Dheepan and his family will ever be truly safe and comfortably; is the world they left any different to other parts of the world?

As mentioned, this is another solid entry into the career of Jacques Audiard and just another reason why he’s a director who you need to keep an eye on.