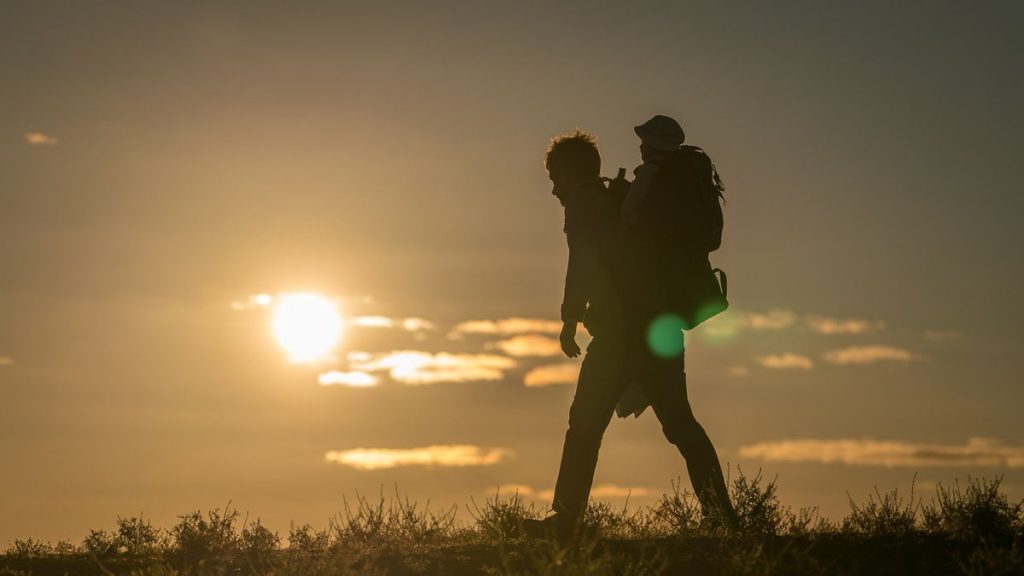 Back in 2013, after short film festival Tropfest, Yolanda Ramke and Ben Howling offered the short film Cargo to the world. The YouTube release went off and the film currently holds over 14 million views. Luckily for the film makers it was such a hit that it has transitioned into a feature film starring Martin Freeman (TV’s Sherlock Holmes, Black Panther), David Gulpilil (Walkabout, The Proposition), Natasha Wanganeen (Rabbit Proof Fence), Anthony Hayes (The Slap and pretty much every other Aussie production), and a glowing performance from newcomer Simone Landers.

Cargo follows Martin Freeman’s character, Andy, who through some unfortunate events has become infected with a virus and will turn into a thoughtless and ravenous ‘Viral’ in 48 hours. He has exactly this amount of time to find a safe place for his young daughter Rosie (Lillee-Anne and Marlee Jane McPherson-Dobbins). Throughout his search for a sanctuary he comes across various characters in the outback, some good and some bad but nowhere appropriate for his daughter. His luck changes when he encounters young First Nation’s girl Thoomi (Simone Landers) who promises to lead him to a safe place after he helps her free Cleverman Daku (David Gulpilil) from the clutches of the obligatory villain Vic (Anthony Hayes).

Martin Freeman is a great actor, I have been a fan of his for a long time, but he really outdoes himself in this film. As a father who would do anything for his children, I really felt for his character. Andy was relatable, believable, honest and kind. He wasn’t a hero – he was simply human. Freeman brought this to the screen in a way I can’t imagine anyone else could have. He was perfectly cast. His relationship with Rosie also shone, as did the relationship he develops on screen with Thoomi.

Simone Landers, whom had never acted a day in her life before being cast in the film is an absolute delight to watch on screen. Her performance is mesmerizing, and again, the right person was chosen to perform he role. If Australian television and cinema decide to cast more First Nations people in productions then she has a bright future in the industry.

Natasha Wanganeen, in a predominately non speaking, but very dominant performance, plays Thoomi’s mother and Warrior. She is out searching for her daughter while also slaying virals with the rest of her mob – she is something of a – as Natasha herself described it during the Q and A – ‘Black Xena’. Hopefully Martin Freeman can hook her up with a role alongside Black Panther, as the role of a warrior suits her well ,and I believe she could hold her own alongside Chadwick Boseman. There is nothing I can say about David Gulpilil, he is wonderous in every one of his performances and has graced our screens for such a long time that we all know he is a house hold name. The same can be said for Anthony Hayes, constantly on our screens, maybe not quite as graceful but always reliable.

The score in the film is amazing, produced by Daniel Rankine (also known as Trials from A.B. Original and The Funkoars) adds so much to the film. Daniel has stamped his musical ingenuity into many Australian hip hop productions across the nation and his experience here is telling.

Filmed in South Australia, the cinematography by Geoffrey Simpson is also stunning. Simpson’s experience really shines with the use of aerial shots of the Murray River and the Flinders Ranges that help you grasp the desperation that Andy is experiencing.

Director’s Yolanda Ramke, whom is also the screen writer and Ben Howling have done a wonderful job on this film, I was engaged from the opening scene all the way through until the credits started rolling. Cargo is to drama and horror as Shaun of the Dead is to comedy and horror – a perfect genre mix.

My question from the Q and A

I attended a screening of the film which included a Q and A with directors, Yolanda Ramke and Ben Howling along with star Natasha Wanganeen.

Q: Being a proud Wongatha man, I asked Yolanda and Ben what inspired them, as white filmmakers, to include Aboriginal culture in not only such a pivotal way, but such a positive way.

A: Yolanda and Ben explained that they really tried to open their minds and think about how Australia may be in the event of a viral outbreak. They decided that as Aboriginal culture is the oldest living culture in the world, that it would make sense that it would not only survive once more, but flourish under such circumstances, so including that in the film was an easy was choice.