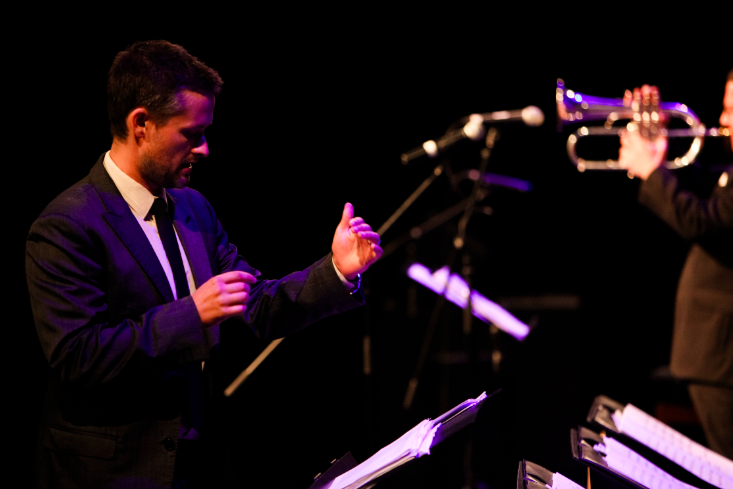 Mace left Geelong nearly 15 years ago to begin his studies at the WA Academy of Performing Arts (WAAPA). Since then he’s made himself right at home in Perth, becoming a staple of the west coast jazz scene and picking up some impressive nods along the way (2007 Most Out-Standing Individual Contribution to Jazz in WA” by the Perth Jazz Society and a finalist in the 2010 MCA Freedman Fellowship to name a few).

His big band, Mace Francis Orchestra, has toured Australia 4 times, recorded 6 albums and received the 2015 APRA AMCOS Art Music Award for Jazz Work of the Year for their 2015 album ‘Music For Average Photography’. He’s also artistic director for  WA Youth Jazz Orchestra (WAYJO) and somehow he managed to get a PHD in amongst all this too. You can read more about Mace and his work here.

Perhaps his most impressive accolade however is his French Bulldog named Duke – in honour of the one and only Duke Ellington of course.

Simone managed to catch him right in the lead up to the Perth International Jazz Festival this weekend, of which he’s festival director.

I am feeling the usual amounts of excitement, stress, proudness and terror as I was last year, however this year I have a great team with me, some experience from last year and many lessons learnt… so in a better place. Each day the feeling is different, especially just after 7am when I check on the previous days ticket sales.

I think it is because of the passionate jazz audience in Perth who we love very much.

This year we have artists from the USA, Canada, Japan, Brazil (via Austria), Brisbane, Melbourne and Sydney. I am very conscious to deliver a varied and diverse program that has something for everyone. We have everything from Veronica Swift how is an amazing jazz be bop jazz vocalist to a free jazz Japanese quartet… almost every other style is covered in between these two extremes of this wonderful genre of music.

The scene here is very strong. Every year WAAPA and WAYJO pump out great young musicians and always have new venues opening up. The younger generation are really motivated putting bands together, recording, finding spaces to perform and it keeps us old folk motivated to keep finding new ways of presenting our music. I am really excited to see lots of larger ensembles being formed and new music being written – this will keep this art form moving forward.

I suggest coming to the jazz festival! Haha! …but seriously, a great place to start is the free community stages where we has lots of amazing local bands. There other free events over the weekend including artist In Conversation, to hear from the artists themselves. These are always really interesting and inspirational. If you like what you hear on the free stage during the day, then come and try something from the ticketed program. Each concert is ticked separately, with concerts starting at $25 up to $45.

Right now I am listening to the Terry Gibbs Dream Band, which is one of my favourite big bands from the late 1950s to early 1960s

I still love listening to the hip hop that I used to listen to a high school – Public Enemy, Ice T and Ice Cube etc

Playing trombone in the Basie Band in the late in 1950s

2020 Perth International Jazz Festival! I am putting together the 2020 WAYJO annual program at the moment which I am excited about because we will be working with lots of great Australian artists. 2020 is my 20th year living in Perth and will be the 15th birthday of my own big band, the Mace Francis Orchestra (MFO) I plan to do a new recording with them and present a series of gigs with new music throughout the year. Also I have started a new quartet called Spatula which I have some collaborative recording and performances planned. I hope to write more music in 2020, which is exciting!

Warrawong… the windy place on the hill Director Simon Target Talks Filming Isolation, Capturing the Stillness of Remote Australia and More in This Interview

The Perth International Jazz Festival kicks off this Friday the 8th through to Sunday the 10th with events at The Bird, The Ellington Jazz Club and the State Theatre Centre. 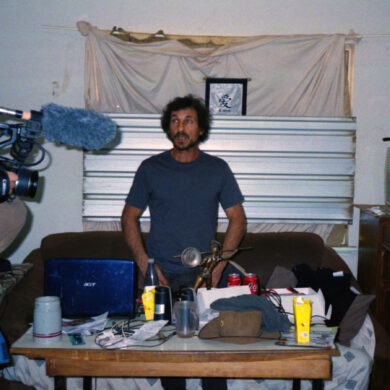