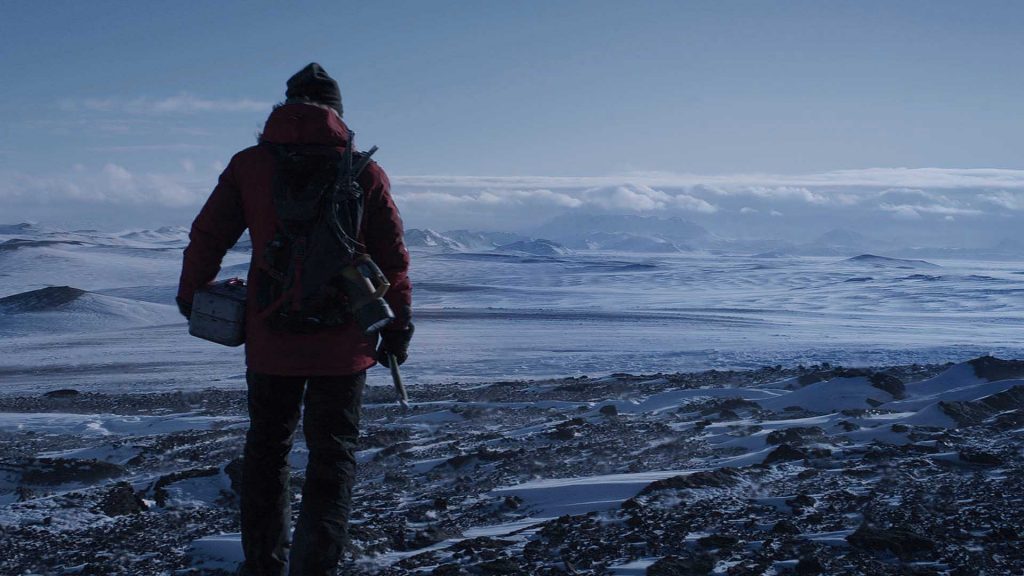 A man is stranded in the great white nothing of the Arctic. We meet him digging into the frozen ground, ploughing a legible SOS into the snow. His watch beeps, and he puts down his shovel and moves onto his next task. He climbs up a nearby hill, stopping momentarily to wipe the snow off a cairn that he’d set up for someone he’d lost. Atop the hill, he manually winds a search beacon in the hope that somebody will come and find him. After sometime, his watch beeps, and he packs up the beacon and moves onto his next task.Near the plane crash site that he uses as his base, he has fishing lines set up to catch Arctic trout. He pulls the fish he’s caught out of the water, storing them in a box to eat later on. His watch beeps again, and he heads back to the plane to sleep.

This is the opening to Joe Penna’s feature debut, Arctic.

The man is Mads Mikkelsen, a weathered individual who has been missing for an indeterminate amount of time – at least long enough for him to grow a beard and form some kind of routine within his makeshift camp. The plot is deceptively thin – on paper, this is a basic survival story, but what transforms it from being a run of the mill ‘man against the wilderness’ tale is the stunning performance from Mikkelsen. It’s no surprise that Mikkelsen can bring class and quality to whatever film he is in, but when he’s paired with a great script from Joe Penna and Ryan Morrison, you see how he manages to elevate great material to something truly special.

There’s no backstory as to how Mikkelsen ended up where he is, instead Penna opts to open the story in media res. Mikkelsen’s character is a clearly empathetic one. He carries the weight of having lost someone and being the lone survivor of a traumatic event. The empathy that he has for others extends to the creatures of the land that he’s occupying. When his store of caught fish is raided by a polar bear, he looks at the creature with an understanding of why it ate the fish. There is literally nothing around for miles, and instead of being angry at the bear for stealing his food, he recognises the desperate situation that they are living in.

Thanks to the cinematography from Tómas Örn Tómasson, we’re given a survey of the land that Mikkelsen is dealing with. It’s a wide field of nothing, with white fields of snow rolling across the land, the occasional hill breaking up the vista. After an event, Mikkelsen’s survivor has to make a path over the treacherous hills to reach a cabin where he might be rescued. It’s here that the physical demands of surviving in a harsh environment are fully realised.

Mikkelsen treks across the snowy landscape with cargo that adds extra weight to his journey. He never complains, instead approaching each problem that arises with a mildly positive outlook. He survived a crash, and he’s survived this long, it’s clear that his resilience will be enough to carry him through whatever difficulties lay ahead for him.

Where survival films have long shown stories of men kicking nature in the nuts and taking no prisoners, Arctic wishes to show an intelligent man who knows his survival techniques, and puts those skills into practice. There’s a clear desire to show the seemingly never ending monotony that comes with trying to survive. The routines, the long stretches of walking, the vast distance that needs to be traversed to get to safety, and most importantly, the unwavering hope that all is not lost. If there’s one element that pushes Arctic above other survival films, it’s Mads Mikkelsen’s moving portrayal of a man who simply cannot – will not – give up hope.

This is the sort of film that you discover years down the line on Netflix, wondering how you’d never heard of the film beforehand. It’s a deftly crafted film that provides an actor with the platform to deliver a powerful, physically and emotionally challenging performance. Seek Arctic out – it may appear deceptively simply on the surface, but come the climax, you’ll be sitting on the edge of your seat carrying the same hope that Mads Mikkelsen’s weathered man carries – the hope that everything will turn out alright.