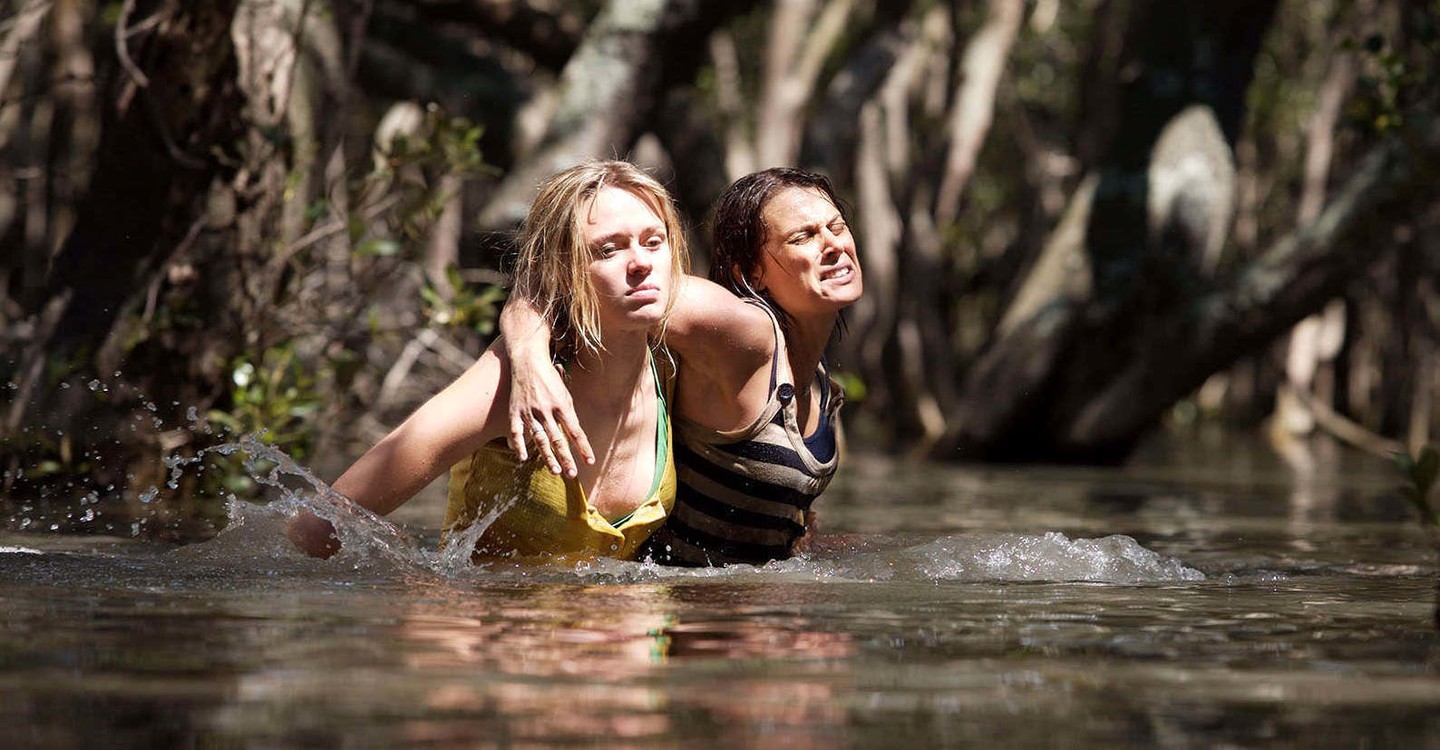 Ask any foreigner about their impressions about Australia, and odds are you’ll get a response about everything wanting to kill you here. Snakes, sharks, spiders: whether you’re on land or in the ocean, you’re likely to encounter something that wants you dead. If you were to ask MP Bob Katter about what creature you should fear the most, it’d be the saltwater crocodile. And, sure enough, as humans have encroached further into the territory of these mammoth reptilian beasts, there have been infrequent occurrences where people have been killed by crocodiles.

Naturally, a giant creature hunting and eating people is easy fodder for genre films, and Australian directors have delivered a few solid flicks about this enduring battle. The new wave era brought about the John Jarratt flick Dark Age, while in 2007 Wolf Creek director Greg McLean tackled a titan of a croc in Rogue. In the same year, the micro-budget indie flick Black Water emerged into the mangroves.

Our main characters are Grace (Diana Glenn), Adam (Andy Rodoreda), and Grace’s sister, Lee (Maeve Dermody), a joyful family heading back home after a family visit to mum (Fiona Press). Their sojourn back to Sydney takes them through the mangrove forests of Queensland, and as they tick off a few tourist visits on the way, they make a spontaneous decision to check out a river tour. Meeting up with rough and tumble mechanic Jim (Ben Oxenbould) has them heading out onto the river in a rickety dinghy, tracking down the labyrinthine streams between the mangroves, looking for an easy spot to fish.

Before they can land a fish, the dinghy is flipped over, Jim is killed, and the family trio escapes up a mangrove tree, keeping eye on the murky water for the lurking croc that may be on the lookout for another easy meal. With no way out of the mangroves, and with nobody knowing their location, they are quite positively in a torturous situation. Hope is the last thing on their minds. Do they climb through the mangroves, with the intention of reaching land? Or, do they follow Adam’s suggestion that he climb down to the capsized boat, only metres away, but in crocodile laden waters, and set it right?

It’s Schrödinger’s crocodile – the murky water both contains a croc, and at the same time, very well may be devoid of crocodiles. A lot of the ample tension within Black Water comes from these moments of uncertainty, with the indie nature of the film helping amplify the realism within this tale. Moments where characters need to traverse the water are gut-tightening with their tension, amplified by a landscape that’s so rarely seen on screen, making it feel like a world that actively rejects all humanity.

Characters are slight, with the barest of development given to them – Grace is pregnant, a fact that only Lee and her know, as she’s saving the news to tell Adam later – but Diana Glenn, Maeve Dermody, and Andy Rodoreda, are excellent performers who deliver stellar realisations of the horrifying situation they find themselves in. Full bodied performances add to the realism, with each actor thrust into nature, defending themselves against mosquitoes and the elements. As the situation moves from awful to dire to horrifyingly downbeat, we’re with each character every step of the way. This is a film that is slight on heroics, with real people trying to survive in the worst situation they could find themselves in.

With an economic sub-ninety minute runtime, it’s impressive how well the tension is sustained, with the last half hour really ramping up the white-knuckle fear as the desperation for survival becomes an even more horrifying reality. Shots of crocs are limited for the most part, but as the climax rolls along, they become more frequent, edited perfectly into the mix by Rodrigo Balart, with momentary glimpses of open jaws, swirling water, and beady eyes all creating a believable scenario of people being torn apart by these ancient beasts. The fact that real crocs were used, alongside very minimal model use, sets Black Water apart from the CGI-heavy Rogue (a film which is still effective, albeit in a very cartoonish manner).

At the opening of Black Water, a note that this is ‘based on a true story’ scrolls across the screen; a routine note for these kinds of eco-horror films. Rather than being a retelling of one ‘true’ story, this is more an amalgamation of the various tales of people being trapped by crocs in the wild. It’s hard not to think of the much derided video of Bob Katter bleating about the amount of people dying by crocodile attacks in Queensland when watching this film, especially over a decade after it appeared. It’d be akin to watching an Aussie shark attack film after years of unfortunate deaths in our waters. These real world horrors feel all too relevant as the years roll by.

A realisation that likely hit a chord with co-director Andrew Traucki, with his follow-up film, The Reef, being another flick about swimmers being attacked by sharks, pulling from the same well that Open Water came from. Traucki’s filmography is jam-packed with these eco-horror flicks, people in peril, under attack from monstrous beasts that occupy areas we probably shouldn’t be in. Even his short film in the horror anthology The ABCs of Death was a eco-horror flick, focusing on a surfer disappearing in the waves. Traucki followed up these outback creature features with his 2020 pseudo-sequel, Black Water Abyss.

Naturally, Australian film history is littered with these kinds of films, with Black Water and the aforementioned Rogue and Dark Age joining the likes of Razorback, Long Weekend, Boar, Bait, and a bunch more budget flicks, all focusing on the creatures that kill in the outback. What distances Black Water from those films is that it’s purely focused on the struggle of its characters against a croc. There’s little in the way of subtext or themes about something grander than that: it’s just a hungry croc against a wayward folks. If anything, the indie-stylings of Black Water help distinguish it as a unique entry in the creature feature horrors. It may be the smallest of the Aussie croc flicks, but it’s no less effective.

Black Water also never turns the crocodiles into out-and-out villains, with the realisation that they’re just crocs doing croc things in their natural environment. An early trip to a crocodile farm reminds us that we may try to contain and control these magnificent predators, but when we’re in their environment, we’re horrifically outclassed. No matter how much evolution has favoured us, there are certain aspects of the world that we simply will never be able to match. As Lee’s family falls to the crocodiles, it’s notable that she curses out the dinghy that flipped so easily, rather than the creatures she’s trying to stay safe from. On a subconscious level, she’s aware that it was mankind that wrought this chaos, not the crocodiles merely being crocodiles.

While Black Water may not be the pinnacle of Aussie horror films, it’s still quietly effective, relying on quiet moments of fear than non-stop frights and violence. Co-directors and co-writers David Nerlich and Andrew Traucki have crafted an effectively tense flick that scratches the right itch. While the availability of Black Water has been limited (it’s currently only available via OzFlix), it would be a shame if it disappeared into Aussie film history. If you like a good creature feature, then this will certainly satiate your horror cravings.