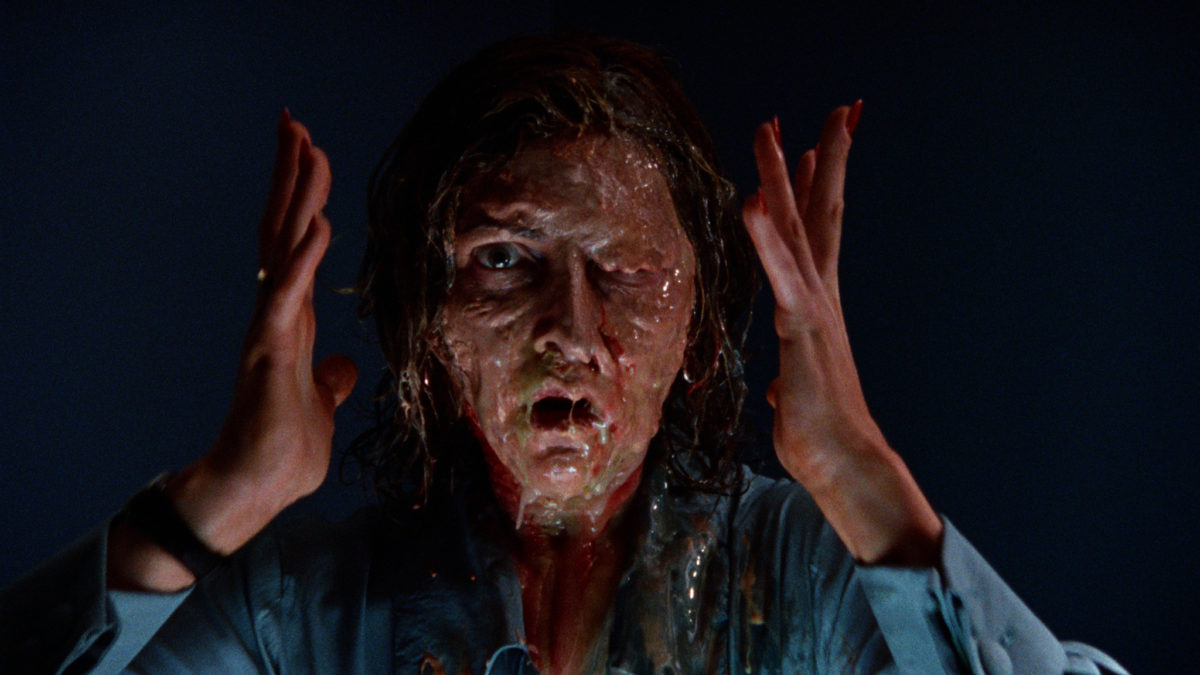 Ok, I have to be honest, I had never heard of Philip Brophy’s insane body horror comedy Body Melt prior to this release. I mean, I’d seen the bug nuts crazy cover for the standard DVD version before, but I’d just dismissed it as being another cheap straight-to-VHS film from the early nineties. Well, shame on me for not actually reading anything about this film and seeing that it’s an Australian body horror flick (a rarity in our cinema landscape). And shame on the horror fan community for not jumping on this film sooner because damn, it’s pretty bloody solid.

Body Melt doesn’t really have a plot per say, other than that there’s a new age pharmaceutical company come health club who wants to help make everyone better and healthier and transform their bodies. How they do this is by injecting and consuming a wide variety of weird, lab conjured concoctions. Why they do this is little concern to the viewer, other than to make the inhabitants of a quiet cul-de-sac explode and (literally) melt in many different, exciting ways.

Part of the joy of the gore within Body Melt is the fact that notable TV stars like William McInnes, Lisa McCune and Andrew Daddo (oh, and of course, Harold from Neighbours) get involved with the sticky, disgusting bodily fluids and organs. This is not always a coherent film, but that’s also partially not the point. Umbrella’s 4K transfer updates the film superbly, making the simply brilliant make up design shine in all its disgusting glory. And what make up! Bob McCarron’s practical effects are the whole reason to watch Body Melt, with his work on Peter Jackson’s Braindead being improved upon here. Notably, the special effects still work today and don’t look like they’ve aged at all.

Behind the kick ass new cover (and it’s a reversible one as well with artwork by Simon Sherry on the flipside), there are a bunch of great special features including two audio commentaries that are jam packed full of information. Recorded in October 2016, the commentaries with the director and production team are frank, open and greatly informative – with all aspects of the production covered, as well as enough behind the scenes tidbits to keep you informed. Notably, what works so well about these commentaries is the fact that just like any good commentary, you don’t have to be paying attention to what’s on screen to understand what they’re talking about at the time.

A behind the scenes featurette is interesting, even if it shares some cross over material with the great thirty minute or so Making Bodies Melt making of feature. Created in 1992, this is a great look at how the practical effects were made. It’s also fun to hear why certain practical effects were implemented, such as how one of the corpses was created, and why there was a need to have penis on display as well.

Overall, this is a really solid release for a very underrated film. Gore hounds need this one in their collection as it’s got some really brilliant effects. Horror fans will enjoy the dark comedy and regular film watchers will get a thrill out of seeing classic Aussie actors getting dirty in a squeamy horror flick.

Head over and buy/stream Body Melt from Umbrella Entertainment here.