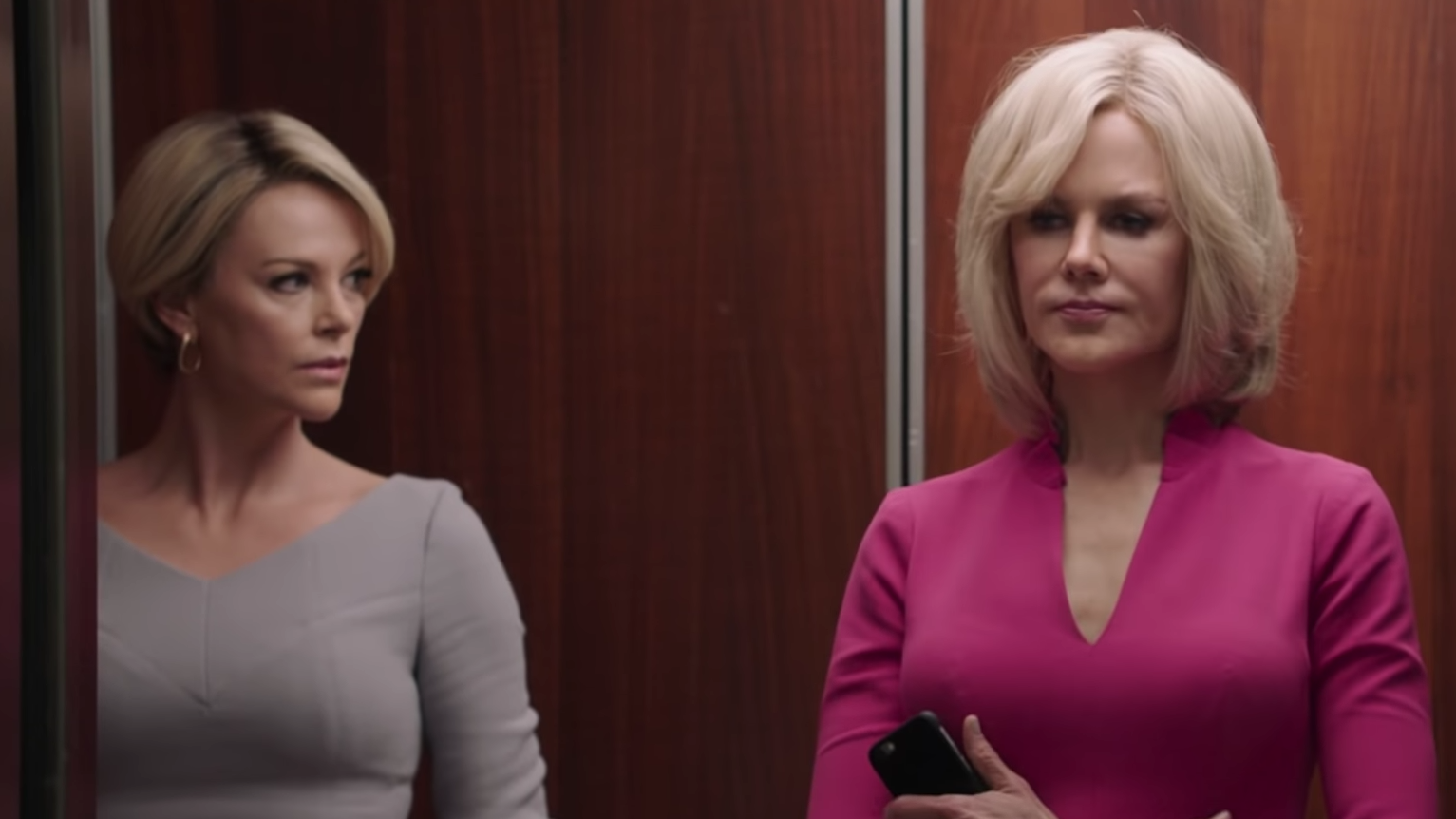 Bombshell Review – Great Performances Fail to Give This One Purpose

Directed by Jay Roach, Bombshell stars Charlize Theron as Megyn Kelly, Nicole Kidman as Gretchen Carlson, and Margot Robbie as Kayla Pospisil: three women who used to work for FOX News and who were, among many other women, sexual harassed by then-FOX News CEO Roger Ailes (John Lithgow). The women individually seek to expose Ailes for his inexcusable actions while facing mountains of scrutiny from those in their mainly-conservative workplace and the media in general.

Okay so I have a big question to ask the filmmakers of Bombshell: what’s the purpose of this movie?

I found myself asking this over and over again. As it stands, there is no apparent purpose could be found in why this story of former FOX News journalists and employees should be told. Naturally, as we are living in the #MeToo era and these conversations and stories continue to influence and change the entertainment industry, the obvious reason is social relevance.

Megyn Kelly was an open critic of Donald Trump’s misogyny, making the relevant social and political context feel apt, but now I come back to my original question: why does this story of sexual harassment of women need to be told?

I’m not saying in any way that these stories of survivors and victims expressing their pain and heartache shouldn’t be told. What I question is why would people want to tell this story of toxic journalists who undermined and demeaned actual political and social progress for years under the banner of FOX News? Am I supposed to feel sorry and support these people because they were recent victims of long-time sexual harassment and assault? It becomes difficult to do, especially after they all got multi-million dollar book deals and TV news appearances after they successfully tore Roger Ailes down and disgraced his name before his death in 2017. It also doesn’t help that this movie doesn’t know what it wants to be.

Bombshell was written by Charles Randolph, whose most notable credit is co-writing the Oscar winning The Big Short with director Adam McKay. Randolph employs a similar approach to The Big Short with a few characters breaking the fourth wall to provide context to the story by explaining who certain people, phrases, or locations are. Unlike The Big Short, you aren’t walking away with some deeper understanding of a tragedy that took place. Bombshell doesn’t add anything new to the information you already knew before watching it about FOX News and Roger Ailes, and confuses you by ending the movie just as things were getting interesting. Just as it appears that this is all a careful build-up to people coming forward, with lines being drawn through the FOX newsroom possibly leading to some kind of clash and fallout that says something about the world today, the film just stops dead in its tracks.

A lot of the failings of Bombshell comes down to the choices director Jay Roach makes. Even if the script is pedestrian and hollow, you could still film it in a dynamic way or find a way to draw the meaning out of it beyond one or two prescient scenes. While I dislike many aspects of The Big Short and Vice, Adam McKay could at least apply a visually striking style to the films with his editing. Jay Roach is not that kind of director at all.

By all accounts, Roach is great with actors, managing to get great performances out of them, but his credits with the Austin Powers series and HBO TV movies (Game Change, Recount), as well as the TV movie-esque Trumbo, speak to someone who isn’t the best fit for the kind of movie that Bombshell needs to be. Roach clearly tries to imitate The Big Short, utilising the same cinematographer (Barry Ackroyd), and even aping some of the films handheld style, but he the impact is dulled with the editing being merely functional rather than confronting. There’s no energy or life here, with a lot of the story gets lost in repetitive scenes of characters talking about whether or not to say something, making a 100 minute runtime feel drawn out like a bloated 2 hour long film.

There are positives, with Bombshell showcasing many great performances, mostly from Charlize Theron, John Lithgow, and Margot Robbie. Wonderful makeup by Vivian Baker, Cristina Waltz, Richard Redlefsen, and the legendary Kazu Hiro help transform these actresses into the people they’re portraying. Theron believably becomes Megyn Kelly in voice and mannerisms, aided by make-up so convincing I had trouble telling myself some scenes were recreations of FOX broadcasts and not just the real thing.

Robbie’s character Kayla is a composite of other women at FOX News (which makes her bi-sexual subplot feel cheap) so the insight there gets lost in simplicity, but she does well with only a handful of scenes compared to Theron and Kidman. Her one major scene with Lithgow was without a doubt the movie’s finest yet most uncomfortable, confronting and important scene.

Lithgow isn’t getting anywhere near the kind of attention he deserves in becoming a truly horrid and pitiful man of power who you wish was never real. Kidman does fine enough, but her character in Gretchen Carlson feels extraneous in the second half.

One Night the Moon Review – A Thematically Relevant Outback Opera

I can’t say I was disappointed with Bombshell. I heard no real positive or negative talk about it beyond the Golden Globe nominations (which mean nothing), yet I still left feeling rather confused as to why this story needed to be told? It doesn’t say anything about FOX News that wasn’t already well known, it doesn’t show a side of Megyn Kelly that isn’t public knowledge. The middle of this story should be the beginning, with the film wrapping up before the really interesting events related to Trump’s election, Ailes’ death, Bill O’Reilly’s firing and Rupert Murdoch selling off most of the Fox Corporation to Disney even happens.

The filmmakers get lost in the desire and rush to tell a hot button, relevant and timely story of sexual harassment that they seem to forget who the story is actually about or what any of this really means. Bombshell isn’t bad, but it isn’t enough to justify such great performances from Theron, Lithgow, and Robbie, and ends as an unmemorable HBO movie that’s going to theatres.