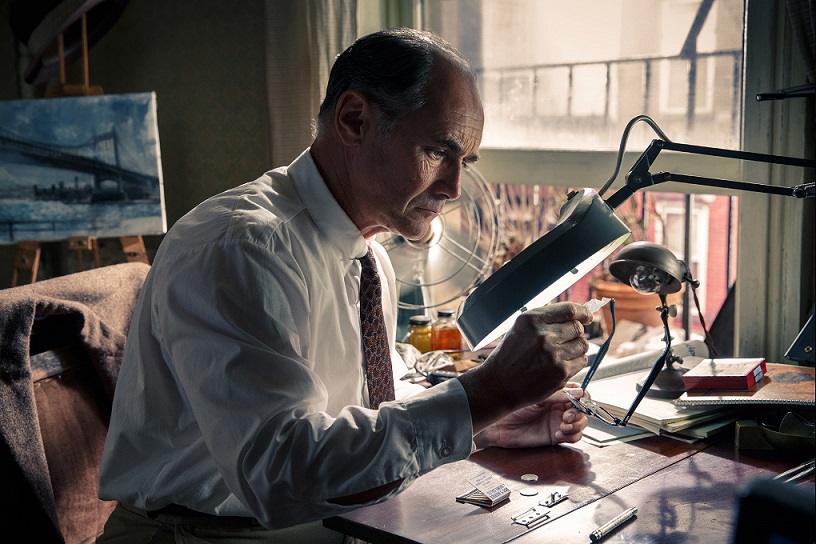 When reviewing a new Steven Spielberg film, you come to it with decades of classics and masterpieces in your mind. Unlike other filmmakers, Spielberg films come with a certain level of expectation that other filmmakers aren’t subject to. As we enter these later years in Spielberg’s career, we’ve seen a greater sentimental streak from him than usual. The overly rose tinted glasses view of War Horse made the film the first tired entry into his oeuvre since The Terminal. Lincoln was a political wonder that made restructuring the American constitution both intriguing and exciting. Coming to Bridge of Spies, I had hoped there would be a mixture of the awe of American history that Lincoln had as well as classic Spielberg tension.

As it is, Bridge of Spies is just fine. It’s a serviceable film about one of Spielberg’s favourite subjects – war – which brings about the pairing of two of cinemas greatest minds: the Coen Brothers and Spielberg. The Coen’s take scripting duties here, writing a script based loosely on a true story. Espionage is under the microscope as Russian spy, Rudolf Abel (Mark Rylance), is captured in New York, and it’s up to every-Dad Tom Hanks as James Donovan to defend him in the court of law.

Bridge of Spies is an odd beast of a film. Hanks performance is great – as per usual – and plays the role of tired lawyer Donovan just fine. Spielberg’s handling of some of the “spy” moments are interesting and exciting to watch – especially the impeccable intro; and a plane crash sequence midway through gives the film a much needed boost. However, given this is a Coen brother script, there is a lot of very dry humour here that simply falls flat in the hands of Spielberg.

Spielberg has never been a very comedic director. Most of his ‘comedic’ moments have come from the actors themselves – Hanks spot-on line delivery in Catch Me If You Can comes to mind – so for such an overtly dramatic story like Bridge of Spies, he doesn’t allow for the more comedic moments to be given room to breath. Hanks’ Donovan continually talks about wanting to just go to bed and rest, and it’s clear that these moments were written with the traditional dry dark Coen brothers humour. However, they’re presented here as a man who is simply tired and wants to rest yet soldiers on doing the job he’s employed to do. Which is fine, it’s just that here they appear to fall flat.

There are other comedic moments as well peppered throughout the film, but naturally, Bridge of Spies is not directed as a comedy. There is an interesting throughline of Donovan – patriotic American – being employed to defend Russian spy Abel. The point that any person should be given a fair trial is explored thoroughly within the first half, and then when Donovan embarks to East Germany to participate in the trade of spies the film suddenly becomes quite tired and tedious. There are suggestions that Donovan questions who he can trust, but it’s never properly explored for any potential tension. In fact, for the most part things in East Germany appear quite alright.

When Donovan goes on the Eastern side of the Berlin Wall for the first time, he’s presented with a group of thugs who steal his overcoat. This moment never really felt tense at all. In fact, I fully expected the thugs to either give Donovan directions to his hotel or a massive group hug given the complete lack of tension in the scene.

Fortunately, Bridge of Spies is carried through with a great central performance by Tom Hanks. He manages to deliver the Coen brothers dialogue just right and straddles the Spielberg direction nicely as well. Mark Rylance is a real revelation here as Rudolf Abel who is just like Donovan, a man dealing with the situation his work has put him in the way he knows how. Wasted are Alan Alda, Amy Ryan and Jesse Plemons in roles that are exceptionally thankless and at times are just merely set dressing alone. Why Ryan and Plemons are cast here and given such unessential roles is a little perplexing.  Possibly it’s because if this film were directed by the Coen brothers that these minor roles would feel a lot more impactful than they are here as in their films they manage to deliver great minor roles for actors that are memorable.

Spielberg regular collaborator Janusz Kaminski lenses here and does a fine enough job – even if there are some exceptionally odd camera movement choices at times. For example, there is a very random hand held camera moment halfway through the film which just feel very random and out of place. Missing for this film though is John Williams. Bridge of Spies marks the first film since The Colour Purple to not be scored by Williams. Taking his place is beige composer Thomas Newman who provides a predictable score that is serviceable at best. Surprisingly, for the most part there is an absence of score (or possibly, the score is so quiet and average that it’s just hard to hear) which allows for some nice sound design here.

Overall, Bridge of Spies is very minor Spielberg. It’s not The Terminal bad, but it’s also not forging any new ground within his works. I’ve always loved Spielberg’s war films (Schindler’s List still pending a viewing), but having three war films on the go (whilst Lincoln is about slavery, it is still a film about war) has become quite tiring and it’s starting to feel that Spielberg is running out of things to say about that particular genre. Here’s hoping that his upcoming Ready Player One adaptation revitalizes his love of the sci-fi genre.