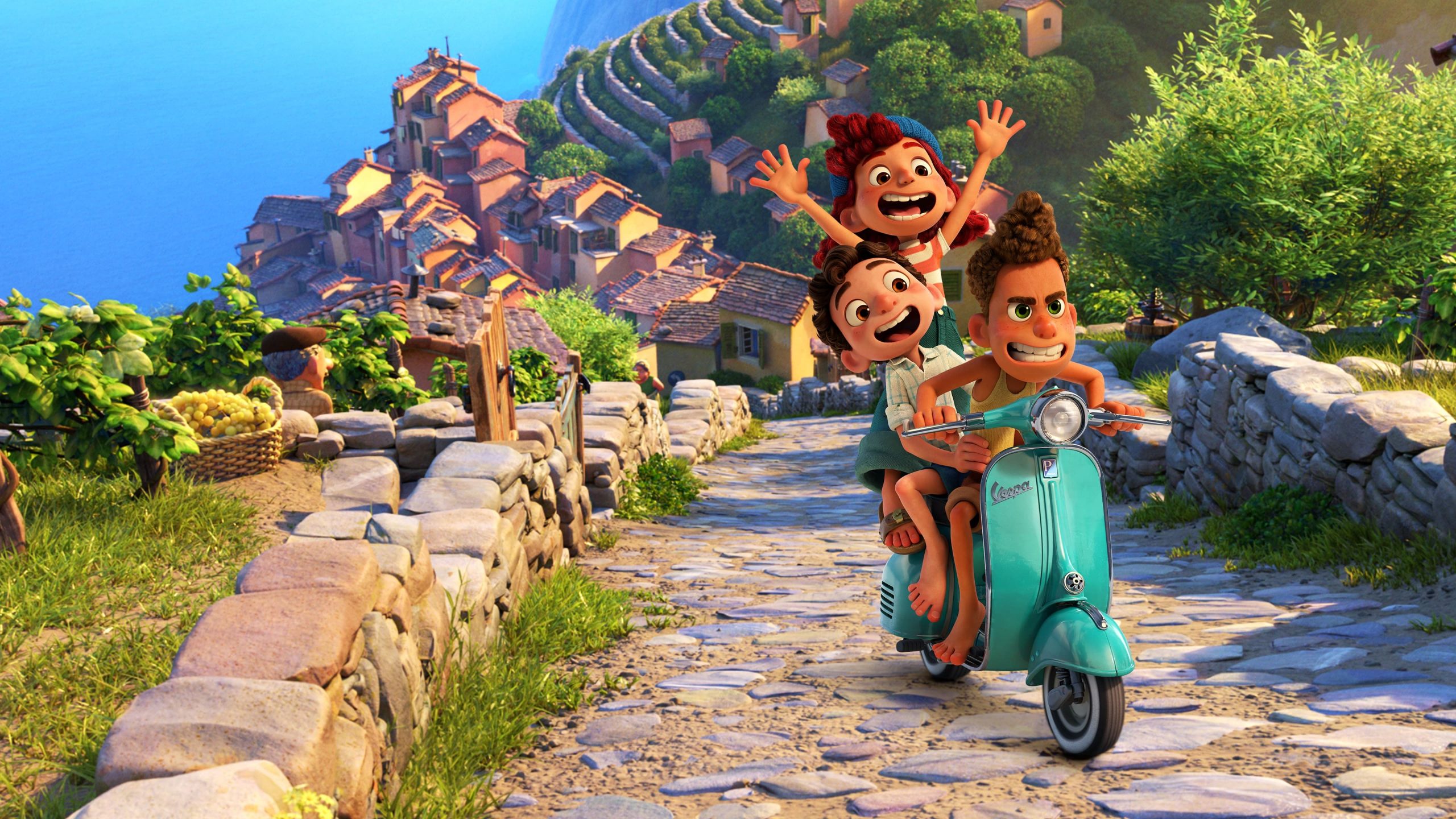 
Luca is representing a problem for Disney+. Ever since Mulan, Disney have declared that most if not all of their major tentpoles will be going to theatres AND be on Disney+ for $30-odd rentals called “Premier Access”. Raya and the Last Dragon and Cruella have been released under this strategy, and so will Black Widow and Jungle Cruise this year (along with other future Disney films, no doubt).

And then there’s Pixar.

It was marginally understandable that Soul was put on Disney+ for no extra cost on Christmas Day last year seeing as vaccines weren’t as widespread and COVID cases were still on the rise in major markets. It was terrible that one of Pixar’s best films (yes, I am that person who loved Soul) couldn’t be seen in a theatre where it was surely intended, but that was done and dusted. I have it on Blu-ray now so I’m a happy guy.

Luca is a friendship story about two sea monsters (voiced by Jacob Tremblay and Jack Dylan Grazer) disguised as little boys spending an Italian summer together overcoming insecurities. Disney have made the same decision they made with Soul by putting Pixar’s latest on Disney+ for no extra cost to subscribers, but this is in the middle of the American summer when vaccines are widespread and available AND other tentpoles are being released and doing well.

Their decision is wrong.

What is the company saying when they release an animated movie of their own, Raya and the Last Dragon, in March to theatres and Premier Access, but don’t give the same treatment to the new film from an animation studio renowned for critical and commercial success. It sends a message that one is seen as better than the other, but no audience has made that decision.

This move of discarding expensive films to streaming services tells audiences that they’re not worthy of the theatrical experience, which is usually what filmmakers make these movies for. The only worth associated with these movies now is to fill up a content quota for a streaming service that suffers from surface-level quality (go deeper and you’ll find nothing worthwhile).

I didn’t love Luca anywhere near as much as other Pixar movies, fitting right along with Ratatouille, Brave, and Onward for Pixar movies that are “just okay”, but that doesn’t matter. Pixar are the best at changing things up and giving audiences new concepts for their movies, and sometimes it doesn’t work, like with The Good Dinosaur. Since Toy Story 4, the company has said they will be focusing more on original ideas like when they first started. This is fantastic, but if these movies are destined to be thrown away into the Sarlaac pit of the Disney+ content library, it makes such efforts seem in vain.

I would rather see these movies and not spend a whole page of a review going on and on about studio politics and release strategies. I would rather focus on the art itself, but when things like this happens, it’s unavoidable.

It also doesn’t help that Luca is just fine, nothing truly exceptional to write home about. Other critics have praised the influence of Studio Ghibli films on its storytelling and characters, but I can’t speak to that seeing as I haven’t seen any Ghibli film. I thought Luca had some nice points about childhood friendship and acceptance of one’s true identity, but even the sea monster twist felt somewhat derivative of The Little Mermaid.

The main character, Luca, lives underwater in a society reminiscent of our own, such as clothes and housing, and has parents who declare the surface world to be full of violent savages who’ll kill their kind on sight. But through discovering lost human objects and another character who thinks they know about the surface world, the protagonist makes the leap out of the water and discovers the connections between two realms.

And then it’s all about an Italian triathlon, learning about the stars, and being obsessed with riding a Vespa all over the world, so that’s where the Little Mermaid connections stop. But you see what I mean.

Luca is a well-meaning adventure with energetic characters and has some nice sentiments by the end, but the Italian accents sound fake, the villain is intolerable, the script is unfocused, and the narrative is disappointingly predictable. Maybe one could enjoy a rather straightforward story of friendship and childhood adventure, but Pixar has a tremendous talent for exceptional storytelling and character development. That unique quality of direction just isn’t here. You know where all the twists and turns are, their arrival is mildly amusing, and the end result is just…fine.

Rambo: Last Blood Review – As American as a Border Wall

One last point: we need to stop with clickbait narratives of how “Pixar have lost their touch”.

Sure, Pixar’s film output has been more uneven in the last 10 years, but when something works for them, it’s masterful. One reason for why some think that the new Pixar movies just “aren’t as good as they used to be” is that you’ve grown up. I see most Pixar movies from Toy Story to The Incredibles to be excellent, but I was a kid when they were coming out. I saw them with a developing mind. A better explanation is that this isn’t a modern issue. Pixar have been uneven with their output since Cars was a mega-hit for merchandising in 2006. That’s when the mentality changed. For every great sequel like Toy Story 3 or fresh idea with WALL-E, Up, and Inside Out, we’ve had 2 Cars sequels, Finding Dory, and tumultuous productions for Brave and The Good Dinosaur, which yielded mixed results at best. Right now, the company is in a transitional phase. Animated films coming directly from Disney are working at the same creative level that Pixar pioneered, so they’ve been trying to find a solid individual future for themselves. This company has produced some of the greatest animated features of all time. It’s okay for 2 or 3 to just be acceptable. Their worst movies are better than all of Illumination and half of Dreamworks. Their success with awards bodies doesn’t mean that independent animation is doomed. An Oscar doesn’t matter. Only time will tell what really works.

Rant over. Have a nice day.