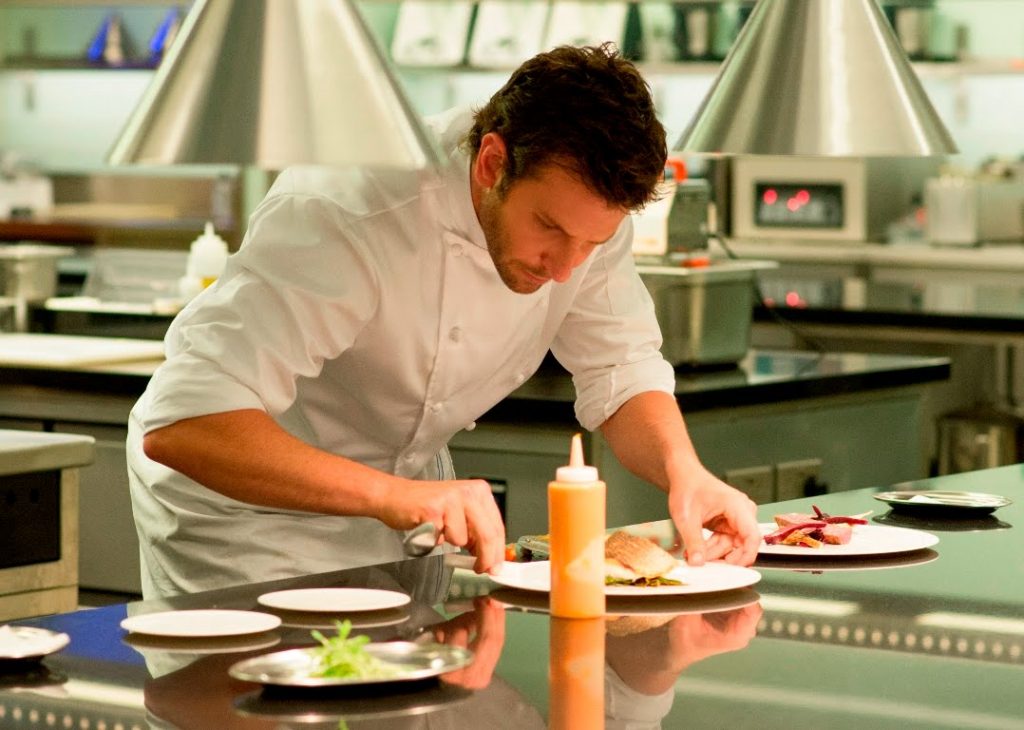 There is a discussion in John Wells film Burnt where Bradley Cooper’s Adam Jones and Sienna Miller’s Helene meet in a Burger King to discuss working together. Jones offers Helene a bite of his burger, at which Helene turns up her nose. Jones then explains the value of Burger King, the value of fast food for the masses. In that short interaction it covers what Burnt is – a film about high cuisine for the masses.

Unfortunately, Burnt’s box office receipts have shown that the masses simply didn’t care for Bradley Cooper as a chef (again). This is disappointing to see, as whilst this isn’t a perfect film it certainly does have a lot to offer the accepting viewer: from Bradley Cooper’s ever watchable Adam Jones, to the good supporting performances by Matthew Rhys (as rival chef Reece) and Daniel Bruhl (as hotel manager Tony), all the way to the exceptionally displayed food. One could say that Burnt hits the right spot like a fresh off the grill fast food burger (for the record – I personally prefer McDonald’s burgers, but a burger from Hungry Jacks [as we know Burger King in Australia] does also hit the spot wonderfully sometimes).

Cooper’s Adam Jones has just come off shucking his one millionth oyster in New Orleans as part of a sabbatical from drugs, women and alcohol. Years before the film opens, he realised that his hedonistic lifestyle wasn’t conducive with having a successful career in the food service industry and decided to clean up his act. Burnt follows his journey to achieving three Michelin stars at a restaurant – the highest of all accolades in the food industry.

The film does go to some lengths to have each and every character explain how good Jones used to be, which does go some way in helping out with understanding why Jones would still use his friends to achieve his own goals. He is a man who is aware of his own talent and knows exactly what he wants. Within Burnt we see a man who has changed a fair amount but still has a lot of changing within himself to do. Your tolerance for Bradley Cooper will determine how much you enjoy his performance here. I personally find his turn as a chef quite enjoyable as he is very charismatic on screen – a fact that fans of the short lived series Kitchen Confidential would attest to.

It’s not a perfect film for sure, especially with an odd sub plot regarding money Jones owes to a mafia group rising its head simply to provide some conflict along the way. Emma Thompson’s psychiatrist character is fine, yet if it were any other actress than Thompson it could have been quite a hokey role. As it is, Thompson makes the best of her role in various Muumuu’s spouting off exposition and character lessons.

Daniel Bruhl’s Tony is wonderfully realised though as the hotel manager who has feelings for Jones. It’s this relationship that propelled the emotional core of the film for me rather than the romantic relationship between Jones and Helene. Bruhl’s performance is very good here to the point that you completely understand why he would risk his father’s business on a renegade chef like Jones. Which is not to say that Sienna Miller’s Helene is no good – she has some very fine scenes and creates a well realised character. It’s obvious that Miller and Cooper have great chemistry together on screen as the scenes with each other have a nice energy to them.

Completely unnecessary and wasted is Uma Thurman’s blink and you’ll miss it lesbian critic who seems to only appear to confirm that Jones once was a very hot commodity – so much so that she slept with him once. Yes, Jones is quite good looking and attractive here and it’s easy to see why people would fall in love with him, but it’s a bit of a stretch to think that a lesbian would sleep with him because he’s so hot – it’s a turn that falls into cringe-worthy The Kids Are Alright territory. Fortunately that is over before you know it. Which is why it’s even odder that Thurman’s character doesn’t turn up when Jones restaurant opens. She is built up to be a make-it-or-break-it food critic, yet on opening night a male food critic rocks up. It’s not film breaking, but it is odd.

Burnt is a harmless film that is just like a Whopper. It’s good when you’re with it, you’ll most likely enjoy your time with it as well. Yet, if you think about it too much afterwards you may feel a bit bad about yourself. I personally don’t feel bad for eating Whoppers or Big Mac’s so could feel quite good about myself for watching Burnt. In fact, it’s made me appreciate Bradley Cooper all the more for his charismatic performance here.

Writers: Steven Knight (based on a book by Michael Kalesniko)