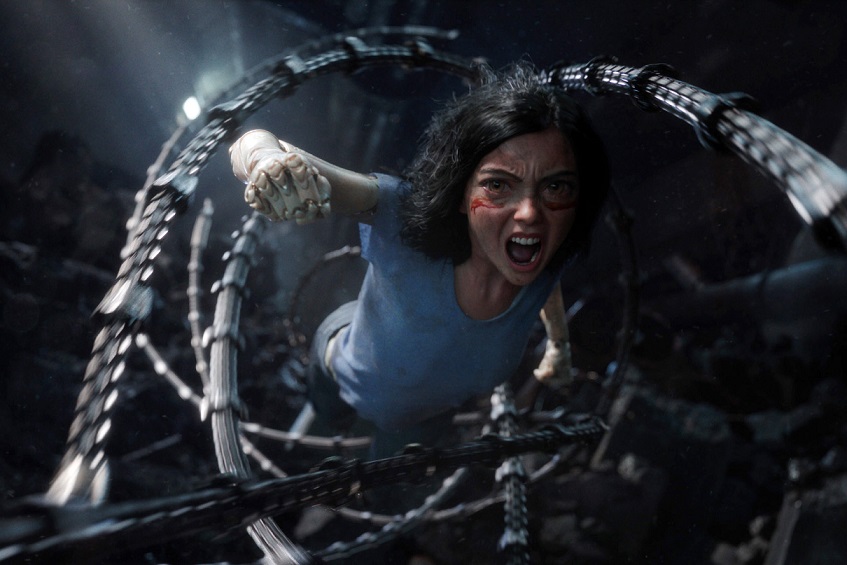 Alita: Battle Angel centres around a 300+ year old nameless cyborg (Rosa Salazar) that Dr. Dyson Ido (Christoph Waltz) finds in a scrap heap and repairs. The cyborg, who decides after Dr. Ido’s suggestion, that she will call herself Alita, has amnesia, and together with Dr. Ido and her new friend Hugo (Keean Johnson), she must discover the world around her and learn about herself and discover her purpose. As she begins to understand who she is, enemies come out of the woodwork and she must fight to survive.

I’ve been excited for this film since early on in the production cycle. The combination of James Cameron and Robert Rodriguez was surely never going to fail, yet even with a $200,000,000 budget it really hasn’t flourished either. It’s not that Alita: Battle Angel is a bad film, it just isn’t the great one you’d expect from such a duo, or such a budget. It certainly isn’t the must-see blockbuster we were promised after years of talk (if you frequent movie forums and websites) and weeks of advertising.

Rosa Salazar is fine as Alita, giving a performance that’s a combination of both motion capture and voice acting, with the actual character being CGI. Probably my favourite part of the film was not the fighting, which normally action sequences are my bread and butter, but in the first act when Alita is freshly repaired, seeing things for the first time, hearing things, learning things, even tasting things. Though I am not sure why a cyborg needs to eat? Where does she number two from? During this period the we see that Alita is curious, she is competitive, she is wonderous – it really was great to see.

Things go downhill when she meets Hugo, and as their relationship develops, the pair fall in love and the clichés begin to hit us one by one. Dr Ido’s relationship with Alita is also frustrating at times, Christoph Waltz gives an acceptable performance, but the character is quite bland and predictable. He is using Alita to replace his long dead daughter, he is over protective etc. etc. you know how it goes. Jennifer Connelly also makes an appearance as Chiren, Ido’s ex-wife and mother of their dead child. Her character is boring and supposedly selfish, but again the cliché’s hit and the expected happens.

Aside from Alita herself, there are only three characters of any real note, and they are all bad guys. Ed Skrein as the pretty boy “hunter warrior” Zapan is great. He’s so up himself and Skrein delivers this beautifully. Jackie Earle Haley as Grewishka is also great, he is evil to the core – so much so, he squishes a little puppy dog. Finally, the best performer of the lot by far was Mahershala Ali as Vector (cool name, too), this guy is going from strength to strength in his career with Green Book and Moonlight, and now this – although I’ll always remember him as being credited as Mahershalalhashbaz Ali from the B-Grade TV show Threat Matrix.

One thing that the 200-million-dollar budget did allow for was great special effects, but I think we all expected this. It all looks great and well-polished. The action scenes were also great but realistically, we’ve seen it all before in any big budget action blockbuster- think Terminator, Transformers, or the Marvel and DC output. It’s all fast-paced CGI action. However, the worst part of the film were some of the one liners. After one particular fight scene where Alita gets assistance from Jeff Fahey in the form of hunter warrior McTeague and his cyborg dogs, McTeague utters “he wasn’t a dog lover, I hate that”. It was a terrible line, but nothing topped when Hugo’s friend (while talking about Alita) says “She was the enemy at one point” and another replies “300 years ago, get over it”. The tone and style in which it was said (to a person of colour) sounded as if it was written by a far-right Trump supporter or in Australian context, a far-right Pauline Hanson supporter. The other really crappy part was that the bounty hunters were called “hunter warriors” in the first place, it just sounds so bad. It’s on par with Shane Black calling the armour seen at the end of The Predator the “Predator Killer”.

The fast pace helped with the enjoyment of the well-choreographed fight sequences. Even though I was frequently frustrated, I didn’t find myself bored and I only took my eyes off of the screen a few times to write notes. Despite the violent comics the film is based on, the film is not very bloody though, obviously when your dealing with primarily with cyborgs, there is not a lot of blood, and even when a kid is sliced in half, there really isn’t much gore at all. I felt this was a large issue, taking the dark, bloody edginess away and replacing with a polished, clean look blended with a teenager love story feel in the vein of Twilight.

In the end, Alita: Battle Angel is an ambitious attempt to convert a story from one medium to another that sadly doesn’t quite manage to pull it off. Using material from several of the comics it seems to blur into a bunch of clichés that are just plain old boring. Luckily it has great pacing and action to help keep it interesting with some cool villains to keep you interested and entertained.