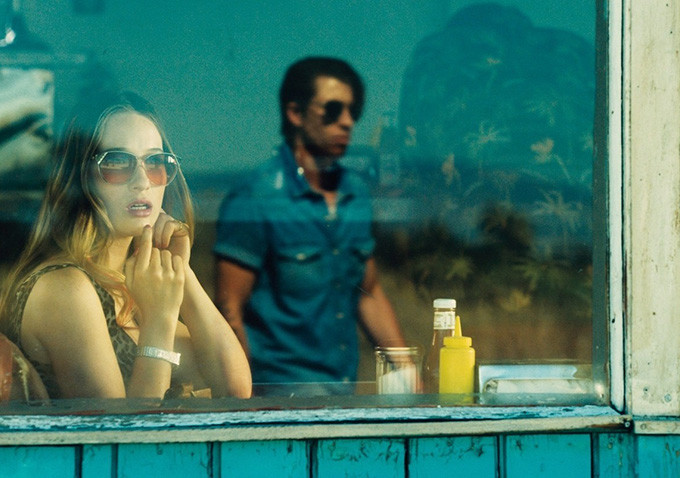 What Lola Wants is a pulpy American road movie through Australian eyes. Starring Sophie Lowe and Beau Knapp, this is Rupert Glasson’s follow up to the enjoyable-enough Coffin Rock. Lowe stars as Lola Franklin, a young girl who runs away from her famous parents and manages to trick the world into thinking she was kidnapped. At a dusty old diner in the middle of nowhere, she meets Beau Knapp’s Marlo, a rockabilly style pick pocket who is on the run himself.

At first, I was a little concerned for What Lola Wants as it starts with something that is a personal gripe with films nowadays – a flash forward to events at a later stage in the film. Quickly though, it launches into a great animated title sequence which helps set up the story and then we’re into it. After being dropped off at the diner, Lola quickly wedges her way into the life of Marlo and before you know it, they’re in love and she’s giving him a cut throat shave under a tree in the American outback.

This is a film which wears its influences on its sleeve quite proudly. The Tarantino-esque music and dialogue permeates through every scene, but it’s never cringeworthy or on the nose. It takes these influences and embraces them wholeheartedly, all the while giving this familiar genre an Australian spin on it.

Sophie Lowe is eminently watchable and has a great time here with a character who feels as if she’s free for the first time. Lola feels like a caged animal who is free, yet the world is slightly frightening for them. There’s a great moment in a convenience store where Marlo is teaching Lola how to pick pocket that manages to turn into a hold-up which is really amusing and fun.

Whilst Lowe is great, the real revelation for me here is Beau Knapp. Through his thick southern accent, he’s a suave and cool individual who has a hard life and trying to make the best of what he’s been dealt with. For the most part, What Lola Wants moves along at a great place for the most part, but for the last quarter it starts to overstay its welcome with an unnecessary B-plot with Marlo’s mum (played by Dale Dickey). It’s disappointing that it ends this way as the rest of the film is really entertaining with a story that reveals itself nicely as it progresses.

The dialogue isn’t perfect, but it’s got enough character to distinguish itself apart from other road movies and Tarantino-esque films. Lola talks about her parents being werewolves and vampires which at first feels too fantastical and twee to be taken seriously, but as the plot progresses there’s real weight to this dialogue.

Overall, What Lola Wants is a heck of a lot of fun and is a nice take on the American road movie. It does unfortunately go a bit off the rails near the end but along the way both Lowe’s Lola and Knapp’s Marlo make for enjoyable characters to spend time with.

What Lola Wants screens at the Revelation Film Festival this year on the following dates: