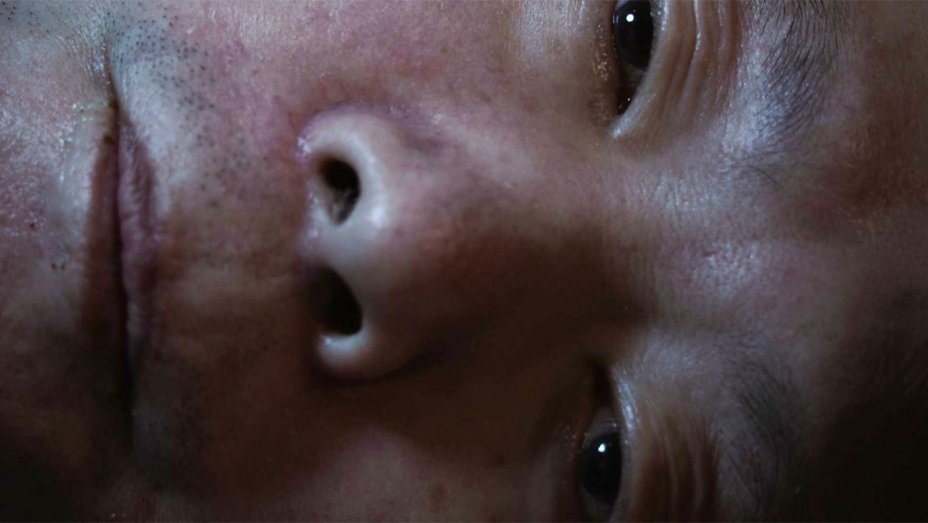 
Directors Lucien Castaing-Taylor and Verena Paravel are doing something quite unique with the documentary film format. As a format of filmmaking, it’s hard to forge new ‘styles’ of documentary filmmaking, but here we are with two filmmakers that have bent and forged something that feels original. By positioning their cameras as close as possible to their subjects, they force the viewer to reckon with them in ways they would never imagined.

With their first full feature, Leviathan, the viewer bore witness to the goings on of a commercial fishing vessel. With cameras capturing footage from a myriad of positions, Castaing-Taylor and Paravel subverted the documentary format by presenting a familiar thing in an unnatural perspective.

With Caniba, a documentary about cannibal Issei Sagawa, Castaing-Taylor and Paravel employ similar techniques. With his caretaker and brother Jun by his side, Issei is ‘interviewed’ about his life as a cannibal, exploring what drove him to do such an act as to consume someone else. There’s little exploration into Issei’s trial, and nor is there a need to take a journey into how Issei is still a free man. Instead, we’re given a look into the mind of a man who knows his desires are extreme and criminal, yet, they are unavoidable – an unquenchable yearning for something that will never come again.

The extreme intimacy with Issei is one that never makes you feel comfortable with him. Castaing-Taylor and Paravel utilise the format of cinema to amplify human behaviours that evoke a feeling of discomfort. The camera moves in and out of focus, constantly readjusting to the face of Issei as he lays in bed, emotionally starring into nothing as he talks somnambulistically about his life. His face consumes the screen, pushing into the viewers personal space and forcing you to constantly reckon with the presence of a man who ate a woman that he killed. Castaing-Taylor and Paravel never allow you to empathise with him, instead they – alongside the viewer – utilise the tools of cinema to interrogate Issei, and eternally ask him the unanswerable question – why?

The cameras invasion of personal space isn’t the only thing of discomfort in Caniba – besides, y’know, the discussions about eating another human that is. The audio aspects of Caniba are some of the most unsettling sounds captured on film. As the documentary opens, the camera searches for an entry point into the narrative, before deciding to rest on an out of focus Issei’s face. In the meantime, as it searches for an anchor, audio of Sagawa eating something creates the soundtrack. Going in to Caniba, you know this is a documentary about a cannibal (and if you weren’t aware, you’d have a pretty good idea of the subject given the title), so immediately your mind is taken to the darkest places, conjuring all manner of images of a man consuming human flesh.

Later, Issei is fed a segment of chocolate. He takes it in his mouth, and sucks the chocolate. A look of ecstasy washes over his face – one of the few distinguishable emotions that we see from Issei. For what feels like an eternity, we watch Issei suck the life out of the chocolate, his mouth creating moist, liquid sounds that make your spine want to curl in on itself. When isolated, the idea of a man enjoying a piece of chocolate seems quaint and harmless, but when presented in the context of a man who finds few joys in life, and when we know that one of those few joys is the consumption of human flesh (as well as eating chocolate), we can’t help but wonder what differentiates someone like Issei Sagawa from the rest of us.

After all, chocolate is a common place treat in the world. If we have that in common with a cannibal, then what else do we have in common? What other things may bring the gap between basic human decency and the actions of a killer closer together? In the chasm that exists in the moments of Issei eating a segment of chocolate, our mind wanders into the worst fields, conjuring thoughts we can’t feel comfortable with having.

Yet, Caniba isn’t just about a cannibal telling his life story. There is also the relationship between Issei and Jun – a man who has his own masochistic proclivities that we are forced to endure. (An extended sequence of Jun wrapping barbed wire around his arms to draw blood, and in turn, create a sense of euphoria, is as uncomfortable as it sounds.) Even though Jun will never fully comprehend the actions of Issei, the mere fact that they are brothers dictates that he must be there to help care for Issei as he grows old and frail.

Aspects of Issei’s history are explored via an observantly shot low-fi VHS tape of a porn film that Issei took part in after his act of cannibalism, or via Jun’s reading of Issei’s manga that depicts the gruesome act of how he went about eating a woman. It’s here that the brutality of Issei’s actions are brought to an amplified level of disturbance. Here is a man who knows his actions are wrong, he knows he claimed a life, yet the manga that he created depicts his actions with extreme vigour and heightened sexual excitement. To know that he has possibly profited of his act of cannibalism is terrifying.

As Jun flips through the pages, the reality of Issei’s actions become clearer to him. Jun struggles to reconcile with the man that lays in front of him, and the actions of the man in the pages of the manga. How can this be his brother? How could he have done such a thing? Just as it appears to be too much for Jun, he flips another page, and we are forced to witness Issei’s artistic depiction of what he did. One image of a man racked with ecstasy, with an oversized erection, and a headless corpse at his feet, will be seared on your mind.

The presence of the manga in all its brutality holds a mirror up to the viewer, as if Castaing-Taylor and Paravel are asking them, ‘you came here for a story about a cannibal, and so you must have an urge to find out the details of his actions, so here you are, here are his actions. Now, reconcile with what you have seen.’ There is the disturbing notion that society as a whole wishes to seek entertainment from the minds of the disturbed – the endless swath of TV shows, books, and movies, about serial killers (real or fictional) appear to sanitise and romanticise the murders. There’s a thrill seeking nature to such ‘entertainment’. By dabbling in the disturbing, you’re able to feel like you’re experiencing some kind of darkness from the safety of your couch.

Caniba‘s presentation of Issei’s manga forces the viewer to say, well, you may have watched endless episodes of Forensic Files, and you may have thought you knew what the actions of a killer looked like, but here it is in stark, extreme reality. Here is what death and the preparation of a body looks like. Yet, the brutality is never oppressive. Castaing-Taylor and Paravel are mere observers, never asking you to sympathise or understand Issei, just merely present you with a man that did a terrible thing, and then ask you to contemplate his life and his actions. The intention is not to turn your stomach, or make you run from the theatre in fear, but to ruminate on the actions of someone who has lived a dark, extreme life.