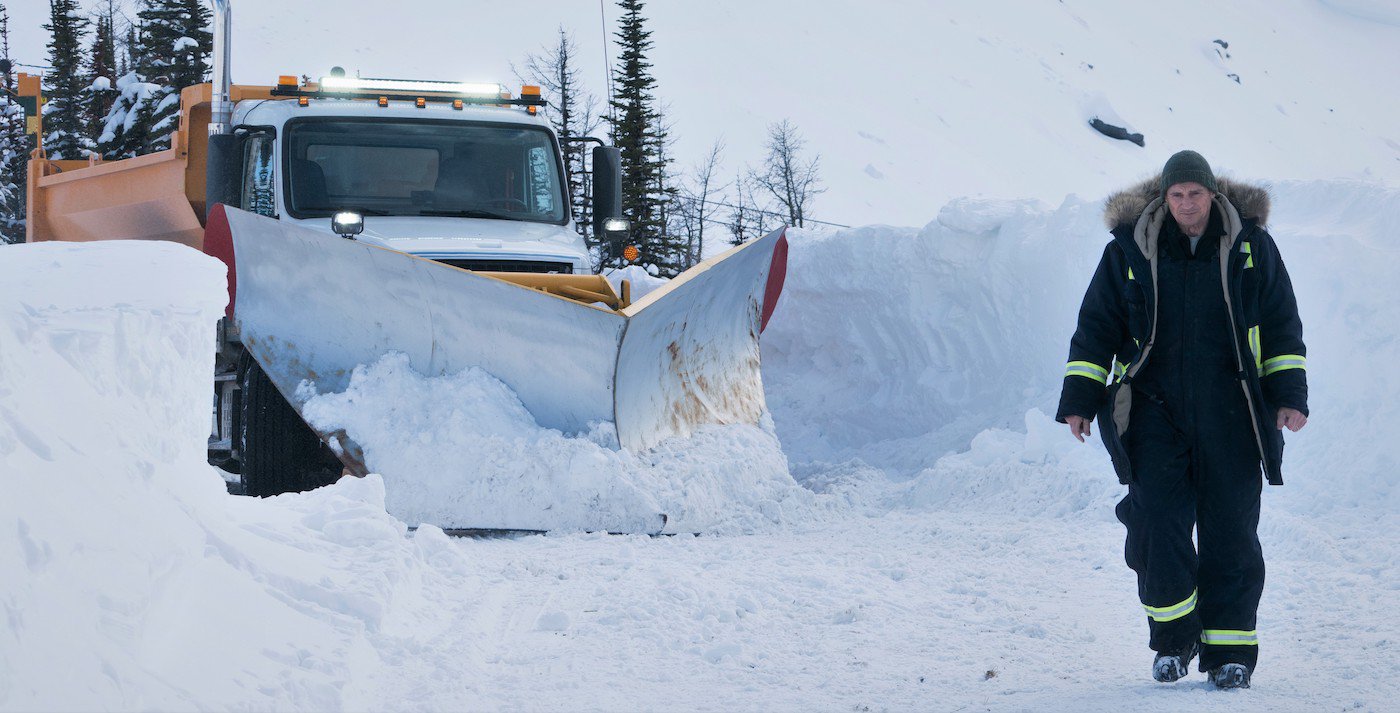 The basic narrative thrust of Cold Pursuit is as Liam Neeson as they come – the son of a snowplow driver is killed by a drug dealer, so the snowplow driver heads off on a path of revenge to take out the dealers. Pretty basic stuff, right? Well, under the guidance of director Hans Petter Moland (remaking his own 2014 Norwegian film, In Order of Disappearance), Cold Pursuit is a truly bonkers film that embraces an eccentric pitch black comedy streak with a fair dose of over the top violence.

To get an idea of how warm the embrace of comedy is within Cold Pursuit, one needs to look at the way the credits roll. Instead of your usual credits roll, the entire cast list is presented on screen, with their names blowing away ‘In Order of Disappearance’. It’s slyly hilarious, and a perfect way to wrap up a film that has every death presented with the characters name and a culturally specific totem.

But, the comedy aspect of Cold Pursuit isn’t entirely obvious, as Moland knows to take his time and ease you into the groove he’s working in. After the death of Liam Neeson’s son (Neeson’s character does have a name, but really, he’s just playing Liam Neeson, ok?), there’s a sadness that washes over the film. That sadness dissipates slowly, making way for a pitch black comedy about warring drug cartels in the middle of snow drenched Denver.

And what comedy! While Liam Neeson fronts the poster of Cold Pursuit, it’s quite impressive how quickly his narrative thread becomes its own b-plot, as the pseudo-business man like Trevor (Tom Bateman) becomes an increasing threat, in turn, staking a claim for the entire movie. Tom Bateman delivers one of the most eccentric, energetic, and on point comedic performances in years. Every scene has him chewing the scenery with verve and enthusiasm, so much so that his performance amplifies the subdued performances of his henchmen (of note is Domenick Lombardozzi’s Mustang).

Opposing Bateman’s Trevor is Tom Jackson’s White Bull. His band of American Indian’s run their own drug cartel, and as the body count from Neeson’s snowplow driver, and in turn, Trevor’s henchmen, escalates, well, White Bull’s men have no choice but to get involved. Their presence leads to one of the most joyous moments in film this year, which I daren’t spoil it as it’s simply one of the most hilarious scenes that comes out of the blue.

On the edges of this out-and-out carnage attack are performances from Emmy Rossum as a new police officer, and Laura Dern as the snowplow driver’s wife. Dern up and leaves early on. Emmy Rossum is always a nice presence on screen, giving a solid performance with minimal material, but it’d be nice if she were given just a touch more screen time here.

Cold Pursuit attempts to add in a minor thematic thread about respecting your past and your culture, while also acknowledging the new path that is being forged by changing society. But, really, it’s such a minor element that it’s not entirely worthwhile exploring. After all, you’re sitting in the cinema to watch an entertaining film about a snowplow driver who takes revenge on those who killed his son. The mere fact you get a heck of a lot more of that, and possibly the finest comedic punchline ending in a film this year, is enough to ensure that Cold Pursuit is most definitely a film you need to seek out.