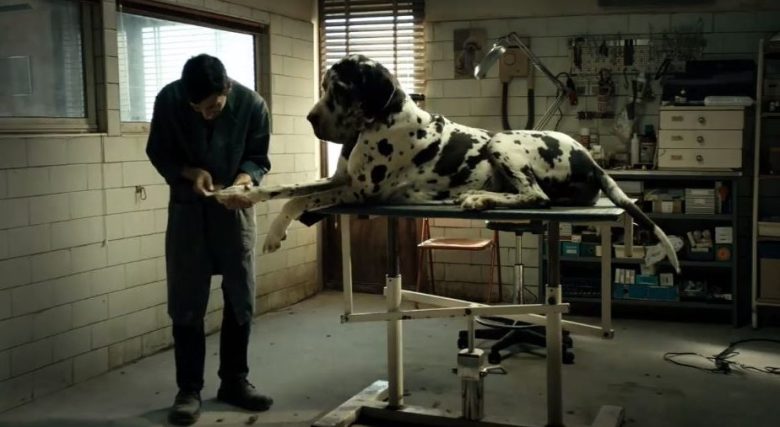 For the dog lovers out there, we’re used to watching films where dogs are part of the main plot, and inevitably, one of the dogs dies to create some kind of empathetic moment. Fortunately, with Matteo Garrone’s film, Dogman, we’re spared any canine deaths. Instead, we’re delivered a tale about a man who has clearly lived his life under the thumb of bullies and oppressors. That man is Marcello (played by Marcello Fonte with a Cannes award winning performance), a meek individual who runs a grooming salon somewhere in downtrodden Italy.

Permeating throughout the town is the stench of the physically overwhelming Simone (Edoardo Pesce). This is a man who has each business frightened by the violence he enacts on others just to get his way. Yet, he isn’t a gangster, or a mob boss, or anything like that – he is simply a brutish, violent individual who manages to persuade others to do what he wants through fear. He is so used to getting everything in life, that when he loses three hundred euros on a gambling machine, he head butts it and drags it outside, all the while the store owner begs him to not do so, and eventually relents and gives him his money back just so he doesn’t ruin the shop any further. This is a world that carries no repercussions for Simone’s actions, and that suits Simone just fine.

However, in between running his humble dog grooming salon, Marcello also provides Simone with cocaine. The relationship that Marcello and Simone have is one that thrives on oppression – only Simone is benefitting from the relationship, all the while Marcello misunderstands the connection the two have as some kind of friendship. To be clear, Marcello never outwardly appears to consider Simone a friend, per say, but more a relationship where he has been bullied in life for so long that he finds some kind of comfort or normalcy in this kind of bond. The relationship Marcello has with his daughter feels entirely vacant, and even more so with her mother. The few times they do spend together, it’s spent diving in an ocean that is cloudy.

Marcello is a quiet individual who merely wants to spend time with his dogs, and also his daughter whom he sees every so often, but given his timid nature, he struggles to stand up for himself. He is not a young man, and it’s obvious that it’s taken him a long time to build (what he considers) strong friendships with the people who live in the town. So, when Simone pushes him into a difficult position that has a logical out, Marcello follows the path he is most familiar with – namely, bending to the force of Simone.

Matteo Garone’s direction is at once both subtle and extremely heavy handed. He wants you to know the brutality of Simone, but also wants you to empathise wholeheartedly with Marcello. These two things aren’t mutually exclusive – one doesn’t exist without the other. Yet, Marcello’s weakness is often too on the nose – we naturally empathise with him, and the relationship he has with the dogs is nice, but there’s simply not enough life given to him as a character. Which, admittedly, is an exceptionally difficult aspect of delivering a narrative where the lead character has been (essentially) beaten into submission their whole life, and we’re meeting them at a point where the bullying has shaped them into a person they never imagined they would be. How do you create an empathetic, full character out of someone who is, at best, only half of who they should be?

I can relate to the character of Marcello because I know what life is like growing up having been bullied. I can empathise with the fear of another beating causing you to do things you would never morally or logically do otherwise. I can also understand and empathise with the comfort that spending time working with dogs will bring. But, I fear that for many viewers, the exceptionally uncomfortable mire of unease that Marcello lives with will be something that is either too foreign for them to comprehend, or simply too dark for them to willingly engage with. There is no lightness in Marcello’s world, but that doesn’t mean to say that he is not a happy individual. He has been through so much pain growing up that he has learned to find some kind of abstract comfort in it, and in turn, has found the small moments of positivity that keep his days going forward. He is not depressed, he is simply weathered by life and yearning for some kind of connectivity with the people around him.

And that in itself is the most depressing aspect of Dogman. Marcello is simply a man who wants to connect with other people, yet, because of his introverted nature and his inability to articulate what he wants, he simply cannot.

I like this film, I appreciate what Matteo Garrone does with the character of Marcello. Garone is a curious filmmaker, one who explores Italian life through lenses that we’re not usually privy to from Italian cinema. Yes, his crime epic, Gomorrah, was a modern look at Italian gangsters, but it felt different and new. Dogman is equally different, yet no less critical of Italian life. Is Garone suggesting that Simone is the brutish manifestation of all the crime bosses that have come before in Italy, their presence still looming large over life across the land? Which would naturally make Marcello the submissive townsperson beaten into submission over decades by an unavoidable hand that hangs over all?

I feel I’m stretching here, but it’s mostly because I’m looking for more than what is presented. I appreciated my time with Dogman, particularly the brilliant performance from Marcello Fonte, but the murkiness of the world leaves a little too much unexplored. But, when the conclusion rolls around, I felt as lonely and longing for some kind of connection as Marcello did. Maybe that’s the point? At which, if it is, then it leaves me pondering a question I have asked myself many times before – if a films intention is to leave you feeling discontent and disconnected, and it manages to create these uncomfortable feelings for you, then has it succeeded? And, if it has succeeded, does that make it a good film? Does a film that works to make you feel negative feelings – and not in a ‘lesson learned’ kind of way, as many holocaust films leave you feeling – become a good film for having done so? Obviously, there are more contributing factors to a films quality than what the emotion you are left with at the end, but it is a question that is worth rolling around in your mind.

Dogman certainly achieves what it intends to do, but that in itself isn’t enough.