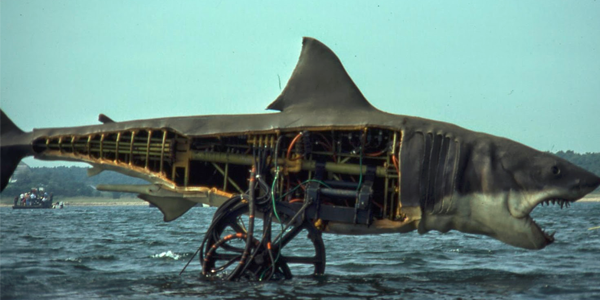 Jaws: The First Blockbuster and Its Legacy Forty Years On

How could it not be? It is the first major blockbuster. Launching on around 400 screens, it earned its budget back in two weeks and gradually grew to being shown on 700 screens. This kind of behaviour is not seen anymore with Hollywood blockbusters. They need to make their money back in the first two weeks or they’re out.

Part of the success of Jaws was the non-stop advertising campaign for the film. The poster is one of the great film posters that displays exactly what Jaws is all about. A shark that is underneath ready to take you when you least expect it. It was the summer of 1975 and to build awareness of Jaws, they advertised the film on trash cans on beaches, they advertised non-stop on television, print campaigns were unavoidable. Simply put, Jaws was the summer of 1975.

When you look at the history of American blockbusters, or even American horror films, none featured a beast like the shark in Jaws. Most importantly, a real beast like the Great White Shark in Jaws. Yes, there were films where the villain is a man who kills, or an alien who kills, but besides the man who slaughters a town of virgin women, nothing is as real and unknown as a Great White Shark.

The real aspect of what is truly unknown about Great White Shark’s plays into the endless fear that Jaws has created. It’s a testament to what a great film Spielberg has made that the effect that Jaws had on the real world is still being felt today.

The threat felt all too real. Spielberg had created a world that for American cinemagoers, it was their reality. Beaches remained empty for the summer of 1975. Shark sightings increased. The ‘Jaws effect’ came into place where fisherman flooded the oceans and caught thousands of these predators.

The effect that Jaws had immediately – and continues to have today – on the public’s perception on sharks was devastating. Part of what made the horror of the deaths in Jaws so powerful was the perception that this Great White Shark could remember particular humans and hold a grudge. This is taken to comical lengths in the sequels where a mother shark hunts down the humans who captured her baby.

Science has shown that Great White Sharks aren’t the serial killer sharks that Jaws has made them out to be. Whilst we still don’t know enough about sharks, we’re reaching a point where we’re accepting that we need to learn more before they disappear. These are some of the oldest lasting species on Earth and unfortunately the ‘Jaws effect’ helped reduce the population of sharks so devastatingly that it’s taken decades for it to recover. Alongside the Asian shark fin trade, it was a double blow to one of the worlds greatest predators.

There are films that have a real world effect that change things for people or lives in the real world. DW Griffith’s The Birth of a Nation helped boost membership with the KKK – something that certainly didn’t help race relations in America at all. As terrible as it was, Super Size Me helped change the mentality of fast food in America.

The ‘Jaws effect’ though is still in existence today. It’s not the fault of Steven Spielberg or Peter Benchley. Both had no idea what the effect of the story they helped bring to life would have on the real world. Spielberg, no doubt, was thrilled at the reaction that people had to Jaws, but the long term reaching effects of Jaws he was probably unaware. Benchley has since stated that if he knew what the effect Jaws would have on shark populations around the world and the senseless slaughter of sharks, he wouldn’t have written it.

Shark populations are slowly returning back to higher levels – these are animals that have the ability to live for seventy to eighty years after all. Education about these great predators of the sea is being more widely pushed and the public perception of Great White Sharks is becoming more accepting. We wouldn’t ruthlessly slaughter lions or tigers just because they exist, so why ruthlessly and randomly slaughter sharks?

Jaws is one of the finest horror films ever made and it celebrated its 39th birthday on the 20th of June 2014. Next year will be 40 years of Jaws. As a horror film lover, it is great to see that a film like Jaws is still having a cinematic effect on viewers. As a shark lover though, I recognise the lengths that shark conservation has still got to go.

However, thanks to the education of sharks we now have a dedicated week set aside for sharks. There is a great respect for these perfect fish. Yes, there are hurdles to go, but I feel there is hope for this apex predator in the future.