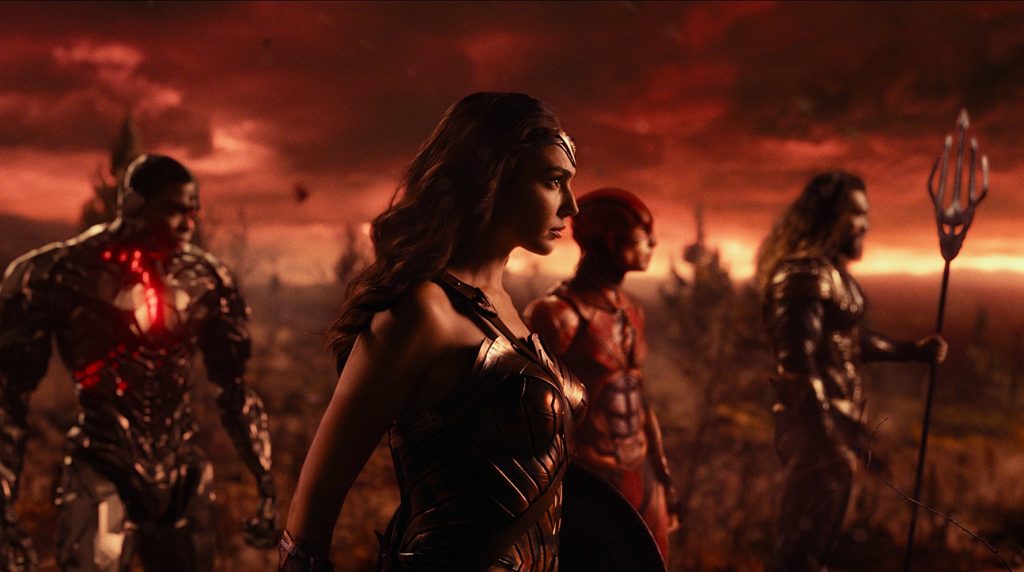 Justice League is a film jam packed full of messy, team driven fun. It’s character focused, it’s entertaining, it’s bright and it hits marks that previous DC films didn’t manage to hit. It is, however, still a Zack Snyder film through and through.

In a bid to ward off the ‘everything is a spoiler’ crowd, I’m going to suggest that for those who the mere mention of a man who is super brings about rage fueled comments, just look at the rating below and, if that’s a threshold that you agree with, then go and see this flick. You’ll have a good time. For everyone else, this is a mostly spoiler free review, so let’s head on in.

Justice League opens with a very messed up CGI Superman standing and providing some precocious kids with material for their podcast. Let’s ignore the fact that A) they’re holding the camera in the wrong manner (always use landscape format people), and B) the audio quality is at a level that wouldn’t make good podcast material, and instead, let’s focus on the fact that it’s quite clear that this is a Joss Whedon scene through and through. It’s earnest, it’s hopeful and it works to reaffirm the audience that hey, this space alien guy wasn’t so bad.

I won’t go into the history of the tragic reason why Whedon was brought on to complete the film, but I will say that it is immediately clear what is Whedon’s work and what is Snyder’s work. To complain about this would be a harsh, cruel move. For some, the wildly different minds of Snyder and Whedon being mashed together may not work; but somehow within the somewhat haphazard, mishmash tone that drives Justice League, it works. There is an energy of wonder and excitement that runs through Justice League that is akin to the excitement that rushes through a kid waking up on a Saturday morning, bleary eyed and ready for their weekly dose of cartoon mayhem.

So, after average podcast guest Kal-El stumbles through his Blue Apron ad, we’re presented with the most Snyder-esque opening. Metropolis and the world is still mourning the death of Superman, and we’re reminded of this via an alt-rock cover of Leonard Cohen’s Everybody Knows. Where Whedon’s world is one of Saturday morning cartoons full of all the pop culture fun under the sun, then Snyder’s aesthetic this time round is mum and dad rock on a sleepy drive home from work. It’s somber, but it’s not Batman V Superman: Dawn of Justice somber. It’s as if Snyder is nudging the audience saying, see, this one’s different.

And it is definitely different. In Snyder’s post-dead Superman world, he’s eager to remind us through montage that people are being persecuted because of their religion. We see a hijab wearing shopkeeper being assaulted by a skinhead. Good thing the police are on hand to stop anything from happening! If the 9/11 imagery of the past DC films made you roll your eyes, then fear not as that imagery has been replaced by glimpses of a war torn country in the middle of a nameless European part of the world. Let’s call it… Sokovia 2: Nuclear Poverty. The CGI driven climax takes place here, but again, could be anywhere in Poverty-ville. For the most part, our view of Sokovia 2 is kept mostly to shots of ‘family in house with bug spray’, and sure, if you’re going to attempt to go all Cinema Sins on this film (please don’t) then, you’ll have a confirmation bias field day here.

Continuing his streak as a really great Batman, we get to see Ben Affleck working the investigative angle of Bruce Wayne’s alter-ego early on. Bug like parademons are appearing in Gotham and it’s up to Batman and co. to find out why. Gradually we’re presented with the day to day life of our heroes. Diana Prince is stopping criminals in their tracks before they can level city blocks. Ray Fisher’s Cyborg Victor Stone is grappling with the realisation that his father turned him into a walking talking Matrix. Barry Allen is a mischievous young adult who struggles with people, finding his way in the world through deflective humour. Arthur Curry is a man of the sea, a brute who provides for a local village in the harsh winter months, on the proviso he’s fueled with enough liquor. Then there’s another guy who appears a bit later on. You know who I’m talking about.

Given this is our first outing with the Justice League, it’s inevitable that the rote ‘bring the team together to fight a common enemy’ narrative exists. This is not Nick Fury spending five movies to bring together a bunch of folks to do some stuff. This is Bruce and Diana realising that some terrible shit is going to happen in a few days so let’s hop onto it and get this problem fixed. The title of Justice League alone suggests that it’s going to shake up the superhero film industry. But it never has that lofty aim in its sights. It’s simply a film that aims to shake up the DC superhero film catalogue and reinstall the Capital F Fun that has been missing in past films.

How well this works for you depends on your level of cynicism. This is a ramshackle-esque film. It’s dirty on the edges and messy on the inside, but it’s got personality for miles. The CGI action is frequently spotty – outside of the Superglitch opening, there’s a Themyscira based battle looks particularly Lord of the Rings knock off-ish – but when it works, it works well. Sure, like many superhero film out there, it’s easy to be reminded by the fact that these are just actors wearing white dots on a green screen, but when you’ve got men zipping through the air and giant horned villains, well, you already have to work that suspension of disbelief muscle.

So, the CGI isn’t always great, that’s forgivable if the story is good enough. This particular tale is nothing special. Bad character wants to destroy the world. Good characters want to stop them. Punching ensues. Chris Terrio’s script has clearly been pepped up with that trademark Joss Whedon zippy dialogue. While this isn’t a joke a minute level comedy, it is still frequent enough that the film becomes more light hearted than previous efforts. Comedy helps build characters, and in turn, helps strengthen relationships. Ezra Miller’s great Barry Allen uses that comedy to insert himself into a group situation where he’s initially unsure of himself. Yet, his defensive jokes are different to Gal Gadot’s compassionate and caring Wonder Woman or Jason Momoa’s blokey Aquaman, both of which share a wonderful moment of laughter. Both Gadot and Affleck are clearly more comfortable in their roles this time around, with a relaxed feeling of familiarity. Affleck is more at ease with delivering a dry jokey line here and there, and boy does it work. Ray Fisher’s Cyborg is the straight man of the group, and he works well in that role.

However, if there’s one character whom the jokes fall flat for most of the time, it’s Henry Cavill’s Superman. As Harrison Ford once said to George Lucas, you can write this shit, but you just can’t say it. Well, Ford managed to deliver Lucas’s stilted lines and in turn, created an iconic character for the ages. The same can’t be said for Cavill. As Superman, he looks the part, with Cavill having perfected the furrowed brow and the always on glare. When paired with his well toned muscles, well, physically he is the man of steel. An extended shirtless scene should help satiate the audience. However, when he attempts to deliver those comedic lines, he fails dismally. Notably, a moment between Lois Lane and a newly revived Superman falls disastrously flat. Even worse is when Superman attempts to explain the sensation of coming back to life as ‘itchy’. It’s a head scratcher for sure, and is the only flat not in the whole group.

Outside of this, the united Justice League team works wonderfully. The chemistry is clear, with the joy of seeing these characters interact being closely followed by the fun and camaraderie that the partnership creates. If rumours of behind the scenes mayhem at DC have you concerned for the futures of these branded heroes, then fear not as this outing suggests that things are working just fine. Instead of being completely back on track, the DC cavalcade is still in the bushes, but it’s getting there. Let’s just hope that any future tinkering and course correcting doesn’t involve throwing the superhero baby out with the bath water.

Danny Elfman provides a great score to unite this mayhem, occasionally throwing in a nod to his 1989 Batman theme and John Williams Superman theme. These Easter eggs are welcome, but one can’t help but miss the theme creating, character defining madness of Junkie XXL and Hans Zimmer’s scores. Wonder Woman’s iconic guitar riff makes a welcome return. Momoa’s Aquaman is paired with The White Stripes Icky Thump, and while this was initially frustrating, it works so darn well that you can’t help but think of Jack White’s riffs whenever Momoa appears on screen. Think of Tony Stark’s relationship with AC/DC and you’re there.

Justice League is Sunday afternoon lazy fun, and really, isn’t that enough? For those who want their superhero films to stop angling to be seen as high art, well, this is the film for you. The pairing of Snyder and Whedon works well, and provides the foundation for an exciting future for this series. It’s rough, that’s for sure, and no doubt there’ll be those who flat out hate it – but mark my words, Batman V Superman: Dawn of Justice this is not. This is not a perfect film, and in many ways, it knows that. Set aside your cynicism and let yourself have fun. It’s clear that everyone on set is having a ball, so why shouldn’t you?

The post credit sequence is one of the most substantial post credit sequences out there. It establishes a sequel that looks downright exciting to watch, with characters that will be a joy to see interact. While Suicide Squad attempted to establish a rogues gallery, it never truly felt like that group would exist in the world of Wonder Woman or Batman. This after credits teaser suggests a future where a rogues gallery that would fit in that world could exist. It has me very, very excited.