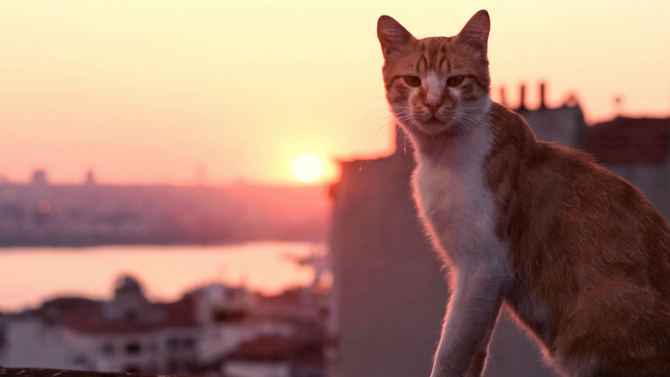 The internet is, quite obviously, obsessed with cats. So much so that it can be a minefield trying to navigate social media or YouTube without being hit with a gif of a cat doing something cute or nefarious. Whether you’re a cat lover or a dog lover, or – say it isn’t so – not even an animal lover, there will be something intriguing and involving with the new documentary Kedi.

Kedi focuses on the city of Istanbul, Turkey and the human and feline citizens that occupy the streets. For thousands of years, cats have been a part of the day to day life of Istanbul, and as cats will do, they manage to push and weave their ways into the lives of humans, even if the chosen ‘feeder’ was never intending to have a cat in their life. Kedi doesn’t focus on one cat in particular, but rather many cats whose lives are slowly being altered by an ever changing city.

Director Ceyda Torun focuses on the symbiotic relationship between cat and human. Relying on this relationship, Torun establishes the concept that through kindness directed at cats (or animals in general), humans are able to see their true self. It’s a simple concept, and one that the film doesn’t try and push strenuously, instead relying on mentioning this idea once and then displaying multiple different cats stories to reinforce it.

Whether it be the male cat who patrols a restaurant by the ocean for any stray mice that may come his way, or the protective female cat who won’t allow any other cat to come close to her male companion, Kedi displays a side of cats that we rarely get from those short videos online. It’s curious then that outside of an Australian cinematic run, Kedi is being released on YouTube’s premium service, Red. This is a company who knows which side their bread is buttered. However, even though it is available to rent on that service, there is something truly wonderful that is gained from a big screen viewing.

Drone cameras capture aerial shots of Istanbul. Its winding streets bend back on themselves, with rustic buildings lining their paths. Shots of cats in the most precarious positions establish that this is less a world of humans that cats are living in, and more of a world of cats who humans just happen to inhabit. However, the rapid progression of human development is gradually threatening to lifestyle of Istanbul and its cats. New hotels and buildings are being rapidly erected, taking the place of much needed marketplaces and older establishments where these feline characters spend their days and gather their foods. Torun’s camera tracks the cats of Istanbul in a heartwarmingly intimate manner, tracing their movements like a cat hunting an owner, yowling for the biscuit bowl to be filled again.

It’s hard then – as an Australian viewer – to not draw a comparison between the relationship Istanbul’s cats have with mankind, and that that cats have on the environment in Australia. Just as humans are encroaching on the environment that cats live in in Istanbul, cats in Australia are ‘encroaching’ on the environment and causing masses of destruction. Why this is relevant is that Kedi reminds Australians viewers that cats aren’t always the destructive creatures that we may know them to be. When given respect and dominance in a society, cats can be quite sweet and affectionate, adding to the personality of the city rather than detracting by bringing endless critter death to the streets.

In fact, if there’s one thing that you can walk away from Kedi knowing, it’s that with all their aged feline intellect, cats have managed to turn an entire city into a world which will feed, care, love and tend to them at their whim. Through telling the stories of one of the animals that we interact with the most, Ceyda Torun has in fact turned the mirror on what it means to be part of the human race. One heartbreaking scene has a man, mid-interview, being delivered an unconscious kitten. Before you know it, he’s on his way off to deliver this little critter the care it needs. Shots like this almost ask the audience, if we can care for animals in such a way, then why are we not more like this to our own kind?

On the surface, this is eighty minutes of cats being cats in a city. It’s sweet, delivering almost exactly what you’d expect from a film dedicated to cats. The stories that are drawn from those who feed the cats, and the cats themselves, helps to provide an aspirational theme to the story. Definitely seek this out, but just be aware that you’ll most likely want to stop off at your local cat shelter on your way home to stock up on more cats.