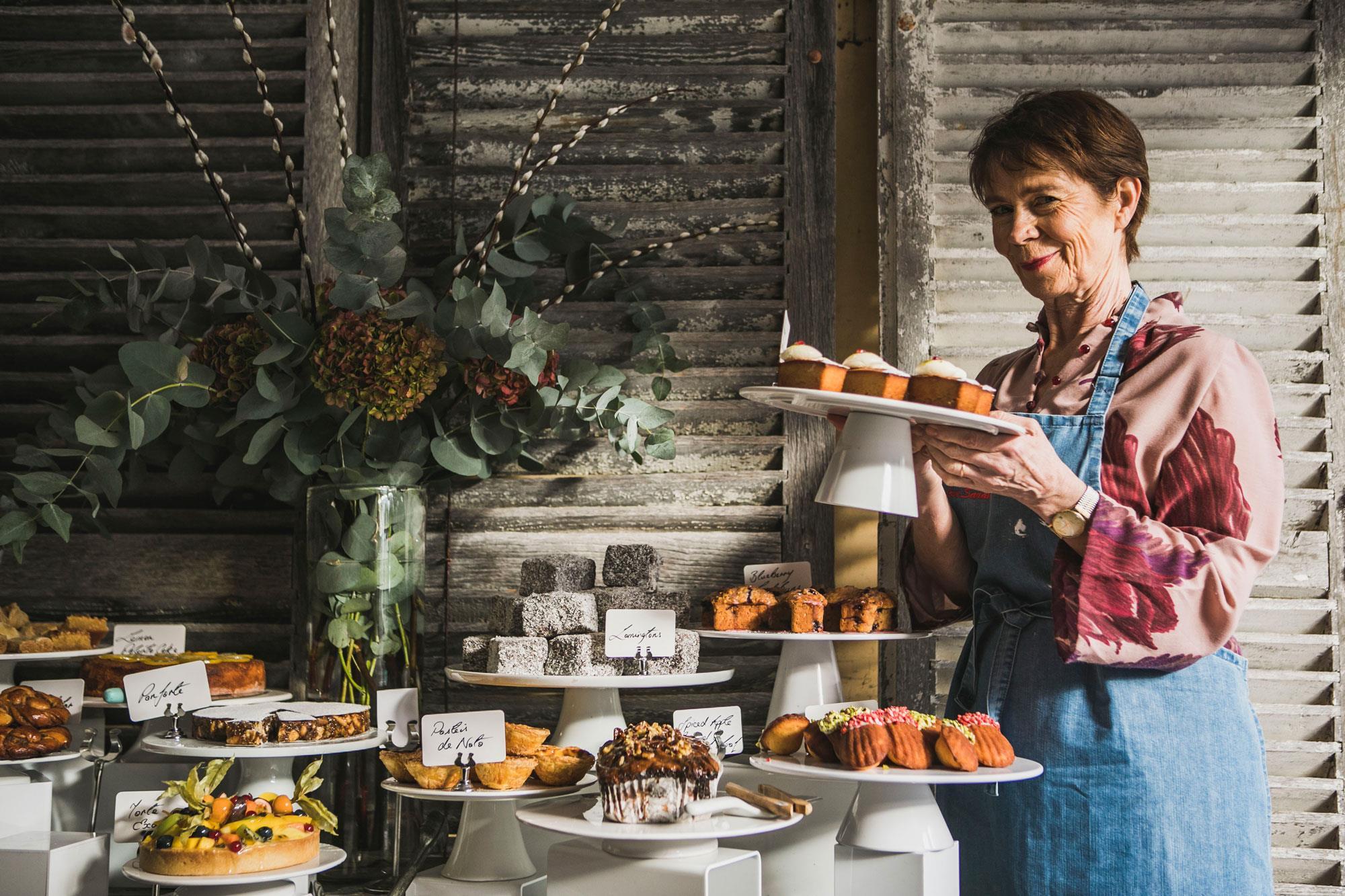 Everyone has a memorable first. First kisses, first loves, first movies, the list goes on. For me, the first film I saw in a cinema once the Covid-19 pandemic restrictions lifted was an innocuous and brittle toffee like sweetness, empty vehicle of a film called Love Sarah. I can’t say I’ll be remembering this film in the distant future, let alone tomorrow, the day after viewing. But I certainly will remember the elation and rush of emotion that I felt as I sat in the darkened cinema and had a story unfurl in front of my eyes.

Sarah (Candice Brown) wordlessly rides through London on a pristine, golden sunrise drenched morning. Her coat flaps in the wind, all her worries are behind her. Calling from the derelict shop that Sarah will soon be the baker of, is her best friend Isabella (Shelley Conn), anxious for Sarah’s arrival, and eager to start their new business together. Fortuitously writing a letter at the break of dawn to her estranged daughter is Mimi (Celia Imrie), wishing her soon-to-be-deceased child good luck for the new bakery, alongside an immaculately written apology for being so stubborn. Elsewhere, also at the break of day, Sarah’s daughter Clarissa (Shannon Tarbet) stretches her legs as she dances in a room. Alas, within minutes, Sarah is dead, and these three characters are thrust on a path of obstinance and frustration.

Like much of the plot, Matthew’s presence exists to create unnecessary drama, with his sudden appearance in the plot playing out in a grand way of giving Clarissa some purpose. Clarissa doesn’t know who her father is, and yet, Matthew spirits himself into her life as a way of suggesting that he might be her father. Will you care? Unlikely!, given this narrative threads muted conclusion that leaves you wondering why it’s there at all.

Love Sarah’s broken machinations kick off in a busted fashion from the get-go, with a fractured opening that gives up little indication of what kind of person Sarah is as an individual, and as such, the biggest failure of this rather twee bakery-drama is laid bare. We’re given little indication why these three outwardly stubborn, and equally unlikeable, characters would get together to risk massive financial strain to make a bakery for the dead relative/friend come to life. If we were given an ounce of time with Sarah prior to her off-screen death, then we might glean some kind of understanding of why she was the glue that holds these three people together. Amusingly so, director Eliza Schroeder feels that there’s enough of an emotional tie to Sarah as a character to have a groan-worthy glimpse of her grinning spectre in the glass of the bakery after it gets a piece in Time Out written about it. Because, of course.

For a film that seems to think it has three strong, well written, well rounded women characters, the presence of Matthew exists to take all agency and purpose of their own narratives away. But, in possibly the most tedious fashion, none of the actresses are given anything of substance to actually work with, leaving them with a failed souffle of a film to exhibit their talents.

Sure, Celia Imrie gives a nice performance, but that’s expected from her great talent, and Shelley Conn is fine, working with one of the weakest romance plots in a long time, with Shannon Tarbet portraying the role of the grumpy twenty-something upstart with all the stereotypical aplomb as expected from a trope-laden script. Bill Paterson also appears as a bizarre amateur inventor who somehow manages to win Mimi’s heart, giving the great actor little to work with.

All of this highlights the tired and routine script by Jake Brunger that feels like they simply watched a few Richard Curtis trailers and ‘got the drift’ and jumped on the keyboard. Moments of purpose are rare within Love Sarah, with the film feeling like someone had some spare change sitting around and needed to spend it before tax-time hit.

Paterson’s Felix quips that there are five or six bakeries within a five minute walk of this one, why on earth would they set up shop here? And for a lively five minute section, Love Sarah suddenly brims with purpose. Mimi comes to the realisation that a bakery that’s full of desserts and treats that patrons cannot even pronounce, let alone understand what they are, and quickly decides to shift the bakery to a multicultural utopia where the global citizens of the world who call London home can get sweets that remind them of home. A dimly lit baking sequence that feels less like Marvin Gaye’s Let’s Get it On, and more like Chef’s Chocolate Salty Balls, presents the delicious desserts in such a muted fashion you’re left wondering if someone forgot to pay the electricity bill. But it’s this smorgasbord of global sugary delights that shows us the true purpose of this bakery: it is a home away from home.

But alas, the script abandons this united front of the bakery for the continuation of its rote and tepid tale. Which is a genuine shame, because for a moment, Love Sarah presents itself as a challenger to the xenophobic leadership of Boris Johnson and co., with Isabella throwing out an offhanded line about how the government continually rejects immigrants. But it’s simply performative nonsense, an off handed comment, put in place to satiate the sane stay voters in the audience. A thin wafer of civility and sanity. It’s worthwhile mentioning that it’s only the Anglo-Indian character who takes a stab at the Tories, leaving all the other characters to simply shrug it off.

And then, without the slightest sense of irony and awareness, we’re presented with a sequence where Mimi, an elderly white woman, preaches to her table of friends about the amount of diversity that exists within London. On paper, this might sound nice, but on screen it’s almost enough to laugh at.

The derision comes from this moment is solely due to the level of conviction that Love Sarah has with its narrative and purpose: none.

I’m not sure why a film like Love Sarah is getting a theatrical release, especially in Australia where countless Aussie films fail to gain a cinematic audience at all, alongside the countless films given a reduced theatrical run (if at all) thanks to Covid-19. This is the kind of fare that you’d expect to see dropped into the depths of Netflix, abandoned and left for only fans of bakery-focused films to discover once they hit the bottom of the flour pail. And sure, the pastry-porn addicts will be satisfied with the output here: a grand array of delicious delights provided by Ottolenghi, seemingly existing to give next seasons Masterchef contestants something ambitious to make within an unreasonable time frame. But, good looking food is hardly a recommendation for a viewing, given that Pinterest and Instagram exists almost for this sole purpose alone.

And yet, that aforementioned moment of unity and purpose that defines the existence of the bakery hit a chord in my heart. For a few minutes, my mournful mind lept to the many months of quiet and emptiness that have befallen the cinemas around the world, with employees out of work, and stories left untold. I couldn’t help think of the fans of cinema for whom the silver screen is a beacon of home for them. Cinema transports us to places around the world, telling us stories that evoke a rainbow of emotions that make our hearts swell with joy, weep with sadness, or burn with anger.

For a moment, Love Sarah made me feel something: an array of emotions that it expected us to feel because it thinks it’s hitting familiar notes. Instead, devoid of humanity, this film stands confident and proud at the end, like a collapsed cake that says ‘you’ll still eat me!’ as you shuffle it off to the bin of despair. As cinemas reopen, find comfort in something else.