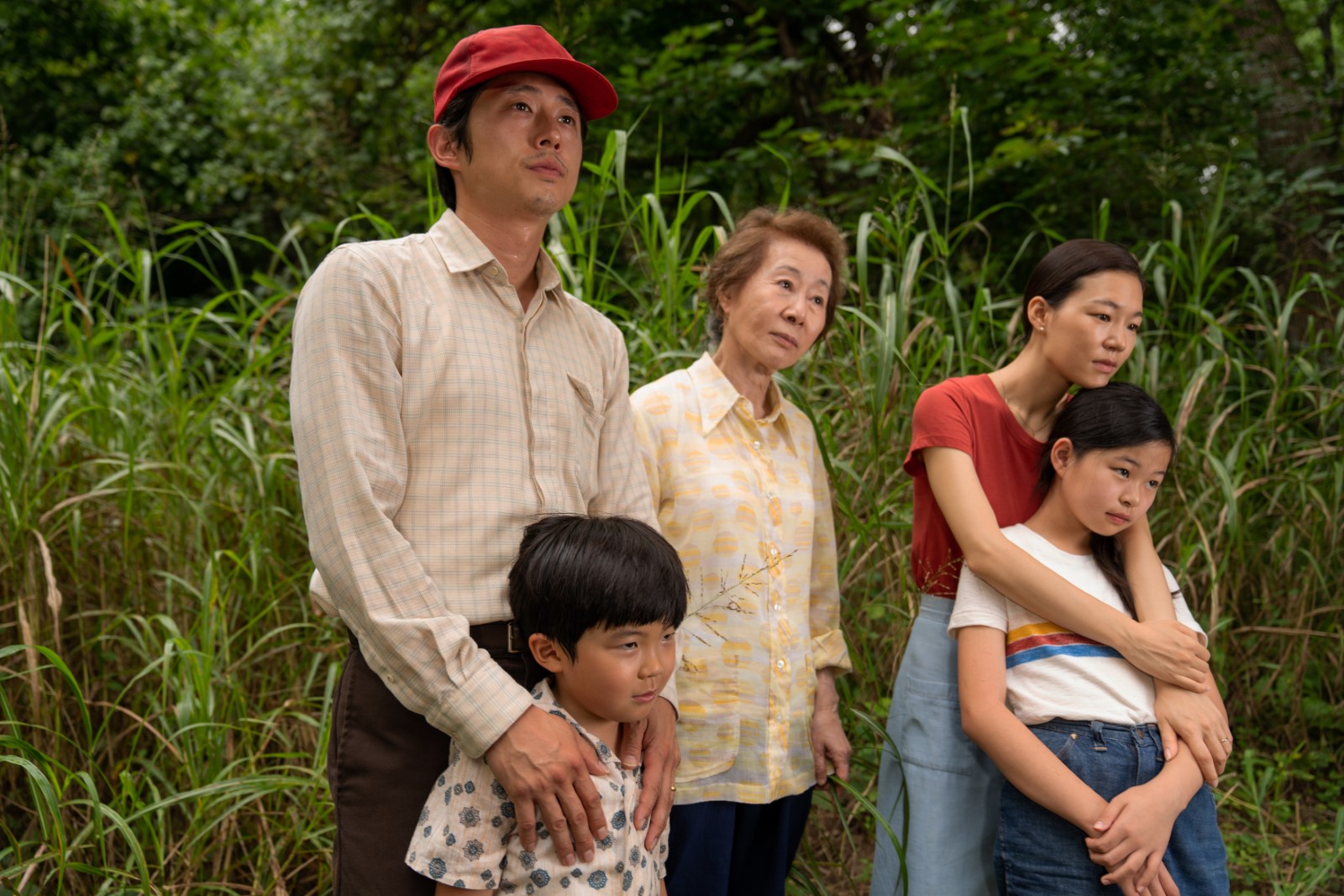 
Written and directed by Lee Isaac Chung, Minari stars Steven Yeun and Han Ye-ri as Jacob and Monica, parents to two children David (Alan Kim) and Anne (Noel Kate Cho), who move their entire family from California to a plot of land in rural Arkansas. Jacob plans to grow Korean produce to sell it elsewhere, Monica struggles with these ambitions and when Monica’s mother Soon-ja (Youn Yuh-jung) visits, the family suffers under the weight of generations and the immigrant life, all channelled through the growing mind of David.

I’m going to get the obvious comparisons that some people might make out of the way: the only connection that Minari has to 2020 Best Picture winner Parasite is that they are mostly in the Korean language and both films serve to successfully break down that “one-inch barrier” that director Bong Joon-ho referred to with international cinema. That is all. There are no similar themes, characters, repeated actors or creative collaborators. Minari was filmed entirely in Oklahoma and is inspired by Chung’s own rural upbringing as the son of Korean immigrants.

Minari is still a wonderful film.

Steven Yeun has become one of our most promising actors since leaving his notable role on The Walking Dead, I show I never did and probably never will watch. Here, he plays this archetype of the committed father who works his land and tries to provide for his family but fails nonetheless. His ambitions pull at the seams of his fragile marriage, and Yeun portrays this internal fragility so beautifully. One scene of Yeun’s Jacob collapsing on the land that’s he worked to the bone to build is filled with an incredible improvised beauty that it takes your breath away.

His anger is fierce but his kindness and solace hits even harder. In another year, Yeun would have been tied to the finish with Riz Ahmed and Delroy Lindo for giving the best male actor performance of 2020, but performances are more than awards and Yeun shines on through as this exhausted father just trying to survive each day.

Han Ye-ri also plays the archetype of the strong mother trying to keep it all together as her husband dives deeper and deeper into dreams that may never come true, and does that just as well as Yeun. Her pain is more concealed behind a face of stoicism, but we always know the truth thanks to Chung’s sensitive screenplay.

And then there’s Youn Yuh-jung who enters after the first act and steals it all away on her delightful shoulders. Playing an elderly woman with none of the “grandma” stereotypes, Yuh-jung as Soon-ja has such a unique light and wonderful energy that starts off quirky but evolves into an incredible emotional complexity that warmed my heart. Soon-ja’s relationship with David in particular opened up memories of my own loving relationship with my maternal grandmother and I thank Chung for touching on that experience.

In fact, because of how Chung creates these characters and fills their space with such reality of life, love and pain that is tied together in the immigrant experience, all of our actors give tremendous performances. Alan Kim, Noel Kate Cho and Will Patton (surprise Will Patton appearance) are no less incredible in their roles, giving their characters soul and charm beyond measure.

The film is photographed to a tremendous quality by Hunt for the Wilderpeople, Stranger Things and Love and Monsters cinematographer Lachlan Milne, working perfectly with editor Harry Yoon, cutting to these mesmerising shots of delicate yet equally unforgiving landscapes of rich nature. The visual style of Minari draws you in with simple lighting and careful compositions that feel like the absolute best choices a filmmaker could make. Overlaying everything is Emile Mosseri’s soulful and yearning score that gives the photographed spaces a sensitive spirituality that drives the characters and story.

Minari may not be the most exciting film to tell others about. Chung is more than happy to just sit with these characters and question why they are here and where they’re going. It’s the kind of film where a cut to a plane of grass or a shot of wind blowing through the trees feels like it is beyond vision or sound. There is life and love on screen that you feel in each frame. It’s a funny and profoundly moving film that doesn’t end with a grand climax where things have turned out perfect. The hardships of life are ongoing. The American Dream is always slightly out-of-reach for this family, but they will grow and spread their life and tenacity as far as they can, just like the titular plant. Driven by those mesmerising performances, captured with perfection by the cinematography, editing, and music, and tied all together by Lee Isaac Chung’s commanding direction of such a small life in the world, Minari is sweet, gentle, and one of the very best of 2020.