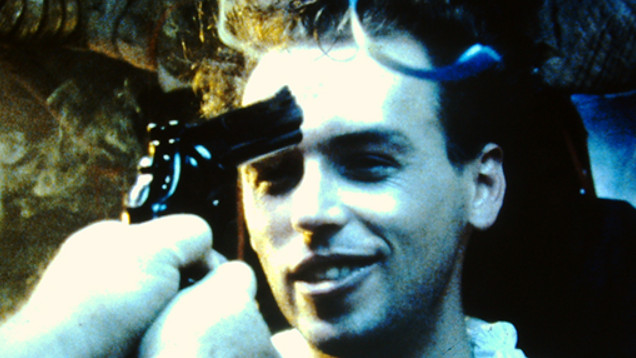 When the rest of the world was making Threads, Miracle Mile and The Day After, Australia was busy making Smoke ‘Em If You’ve Got ‘Em. Writer/director Ray Boseley plugs in the amp, loads up the bong, and turns off the lights for the party to end all parties as he brings the nuclear apocalypse to the Elwood, Melbourne. This 1988 raucous punk affair runs for a brisk 48 minutes, making good on the promise that once the bombs hit, you don’t have long to live, so you best have one heck of a time while you’re going out.

And dammit, Smoke ‘Em If You’ve Got ‘Em is one heck of a good time. Where Threads showed the horrific fallout of a nuclear bomb dropping on London, Smoke ‘Em looks at the already underground post-punk scene in Melbourne in the days after someone, somewhere, decides to send Australia to hell. A bunker in the middle of a cacophony of destruction hides a raging party with a wealth of ragers making the most of their increasingly dwindling drug supply. It’s like the cast of Dogs in Space or Pure Shit never stopped working, keeping the midnight oil burning and moving the party to new digs. And sure enough, the cast carryover from Dogs in Space is real, with Nique Needles making an appearance in Smoke ‘Em.

This is pitch black comedy at its finest. A pure embrace of the ‘we’re all fucked, so let’s make the best of it’ mentality. What could be seen as a license to embrace drug use culture is quite the opposite. In one hilarious moment, one bloke makes a selection from an array of drugs, rejecting the smack because he doesn’t want to get hooked, and instead opting for a ‘bong and bomb’. A huge bong is dragged out, he takes a huge pull from it, and immediately after he’s dragged to a microwave and has his head thrust into it where he gets a ten second twirl of electric currents blasting through his head. It’s brutally hilarious.

Boseley doesn’t want you to head into this film with false impressions, opening the film with an old bloke waking up, ignoring the imminent nuke warning over the radio and wandering to the kitchen to fix himself a coffee. Chaos ensues outside as he looks out the window surveying what’s going on. Before he knows it, the blast hits and the skin is ripped from his skull. His skeleton stands there in his destroyed kitchen, mouth ajar at what’s happened. It’s pitch perfect Looney Tunes-esque comedy.

On the essential Monster Pictures DVD release, Ray Boseley mentions that he was aiming for a blend of The War Game and The Party, and it’s clear that he’s managed to do almost just that. While there’s no painted elephants, there is an increasing realisation of chaos and mayhem. As people start dropping like flies as the radiation takes an intense toll on their body, the bunker gradually fills up with bodily fluids, spilled alcohol and spent syringes. Clayton Jacobson’s blind and deaf drummer keeps banging on, carrying the blues-rock band Blue Ruin through the long, endless night, and in turn, providing a damn great soundtrack for the film. Lead singer Ian ‘Quinsy’ Maclean has one heck of a voice that makes you kinda wish that when the end of the world does eventually come, you’d have someone like him to sing you into death.

Boseley’s dialogue is exceptionally quotable. As the surrogate ‘doctor’ nurses a guy who’s suffering from a head wound, she asks him what his favourite food is. The only available food in the bunker is tomato soup and canned lychees, leading to the superb line: ‘Your days are numbered. Every lychee you eat is one banana you’ll never have time for.’ It’s bittersweet comedy at its finest.

On the surface, Smoke ‘Em If You’ve Got ‘Em is everything that old fuddy duddy’s hated about the eighties. Boseley ensures to include a moment where the old tie wearing, button up shirt, elbows off the table fifties-era fathers are taken down a notch, with the bunker-ites discovering they have neighbours, and in turn, bashing down the wall that separates them and freeing their son who could have spent the rest of eternity in a mire of jigsaw puzzles and boiled cabbage. The old bloke tries to restore order through the only way he knows – waving a gun around, demanding everything is restored – but he’s overpowered by the future.

To hopefully not get too cringeworthy, there’s something decidedly millennial about the punk aesthetic in Smoke ‘Em If You’ve Got ‘Em. Live fast, die hard. The acceptance that we’re all fucked, so we better make the best of what’s left. As much as the baby boomers may want to say that the messed up state that we find ourselves in is the fault of the younger generations, it’s clear that’s not the case. Boseley’s end of the world enthusiasts have embraced the shit plate that life has dealt them and they’re going to make the best of it while they can. If that means facing the unceasing wave of radiation and screaming in its face, then so be it.

Yet, no matter how fucked the bunkers inhabitants are, there’s a strong sense of mate-ship that carries them through everything. As the end rolls along, two blokes sit together on beach chairs watching another bomb soaring through the sky to send them even further into oblivion. It’s an oddly touching moment to see these two guys embrace each other and say how much they meant to each other. There’s genuine love between blokes here – so much so that anyone unfamiliar with the underground punk scene might find this kind of open affection between mates strange.

The shoestring budget for Smoke ‘Em is part of the charm of this genuinely mad film. Coming right at the arse end of the Ozploitation era, Ray Boseley’s film feels like the perfect full stop for one of the most productive periods of Australian cinema. This is a time where Australia experienced Mad Max, Turkey Shoot, The Cars That Ate Paris, Dead End Drive-In, The Chain Reaction, and Fortress, making it no wonder that Australia became synonymous with the post-apocalyptic aesthetic.

Where the UK and the US had legitimate fears that someone was going to drop a nuclear bomb on them, there’s a wonder whether Australia felt that maybe they were just a little bit too far for anyone to go to the bother of bombing us. For a country that feels like it’s the arse end of the world, Smoke ‘Em suggest that the end of the world fears that should plague anyone faced with certain death were simply non-existent. This is not to say that this is a film that is flippant about the fallout of nuclear war, reminding viewers at the end that by moving a lot when drenched with radiation will bring on death quicker and that nukes are a serious thing.

That ‘end of the world’ theme took a break from Australian cinema, for the most part hanging on the fringes in indie cinema, eventually reappearing with great critical acclaim with Zak Hiltdich’s These Final Hours. There’s a tinge of Smoke ‘Em If You’ve Got ‘Em in that flick, where a party rages on as meteors come to claim Earth as their own, wiping everyone out. But, for the most part, Hilditch skews towards the morose with more than an ample nod to Deep Impact’s sobering final shot.

The immediacy of death from above has become more real in the world of Trump and co., so it’s nice and refreshing to dig into a film where that threat was dragged down a peg or three via an over the top dark comedy. Smoke ‘Em If You’ve Got ‘Em isn’t prestige cinema, it’s merely a flick that works like that mate that’s asking you to come round for a few bevvies and have a good time.

This is the exact sort of discovery that makes digging into the history of Australian cinema a real joy.