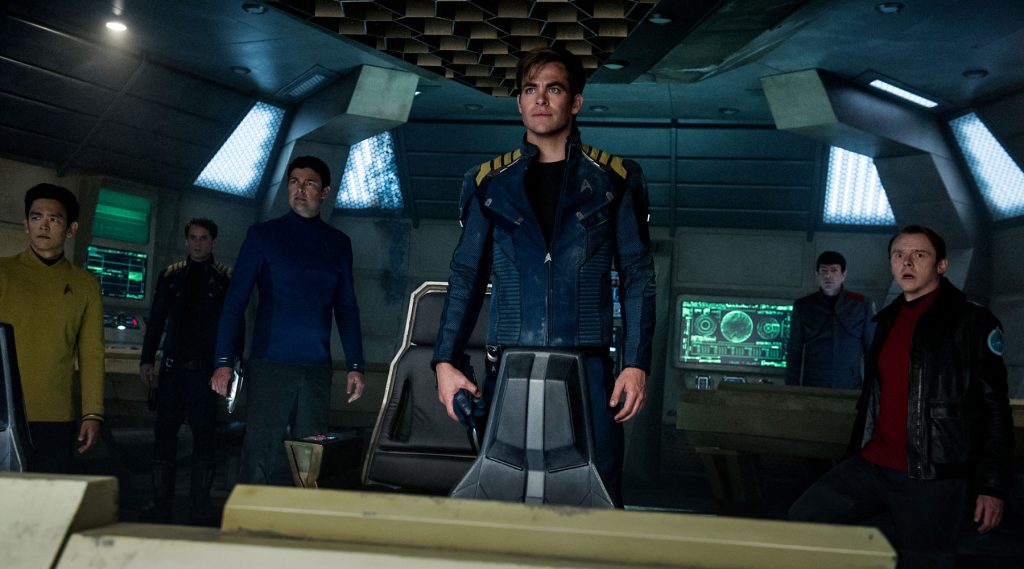 Under the direction of series newcomer, Justin Lin, this story of the crew of the Starship Enterprise doing what they do best feels like the most thematically faithful modern Star Trek film. An unknown ship appears carrying a distressed alien, her ship has been attacked and her crew mates have been captured. It’s up to the crew of the Enterprise to head off into uncharted territory and rescue her captured companions.

Legacy and mortality looms over Star Trek Beyond like a foreboding spectre. The real world deaths of Leonard Nimoy and Anton Yelchin hover over the film. Nimoy’s death is factored into the plot tactfully, paying respect to the actor as well as his most notable character – Spock. Zachary Quinto once again shows why he’s perfectly cast as Spock as he deals with his own impending mortality. As Spock, he now knows his ‘end point’ and the gravity of his own fate plays into some truly touching moments. This is possibly the only point where having seen the first reboot film helps, but it won’t hamper your enjoyment of the film.

What impresses the most about Star Trek Beyond is how well Lin and writers Simon Pegg and (other writer) have created a film that grapples with dark themes such as death and loneliness, but also manages to be the most enjoyable and humorous blockbuster of 2016 so far. Each character is given their own moment to shine – especially Karl Urban’s doctor Bones who steals every scene he’s in. Chris Pine finally feels like he’s comfortable in the role of Captain Kirk – breaking away the shackles of imitating William Shatner and making the role his own. Even Sulu gets his own ‘cheer out loud’ moment when he’s shown to be gay – in fact, in the screening I was in there was extended clapping and cheering.

There is a genuinely progressive tone here – it naturally presents a real world which feels distinctly like our own. Whether it be the mixed race worlds or the frightening villain – Krall (Idris Elba) – who wants to annihilate all. There is a relatability to this universe, the displacement of cultures due to one horrible agenda is upsetting. The latter film revelation of the origin of his agenda becomes even more terrifying, coming from a place of misguided hate and aggression.

If there is one criticism, it would be that the action of the film is a little incoherent at times and feels slightly out of place. When the dialogue and characters are so well written, you can’t help but hope the action is over quick so you can get back to enjoying their interactions. There is, however, one moment where the action and characters truly song on harmony and that is with a climactic scene which utilises ‘classical music’ in one of the most entertaining and leap-out-of-your-seat-and-cheer scenes ever.

Given how great the action is in Justin Lin’s Fast and Furious films, this is a little disappointing. However, I’d love to see him return to the Star Trek series as he brings a life to the film that the Abrams films were lacking. Star Trek Beyond truly feels like the perfect combination of delivering just enough for the Trekkie audience, while also delivering to the audience who has no idea what a Vulcan salute is.

Star Trek Beyond is a pure shot of enjoyment. It starts with a clear objective – to entertain – and delivers. Due to this, it surprisingly catches you with some very emotional moments which feel natural, rather than using real world deaths to drive home their impact. If the 2016 blockbuster season has left you feeling deflated, then please, go and see this film. At best, you’ll feel reinvigorated and hopeful, at worst you’ll at least leave the screening with a smile on your face – and in today’s aggressive world, isn’t that enough?