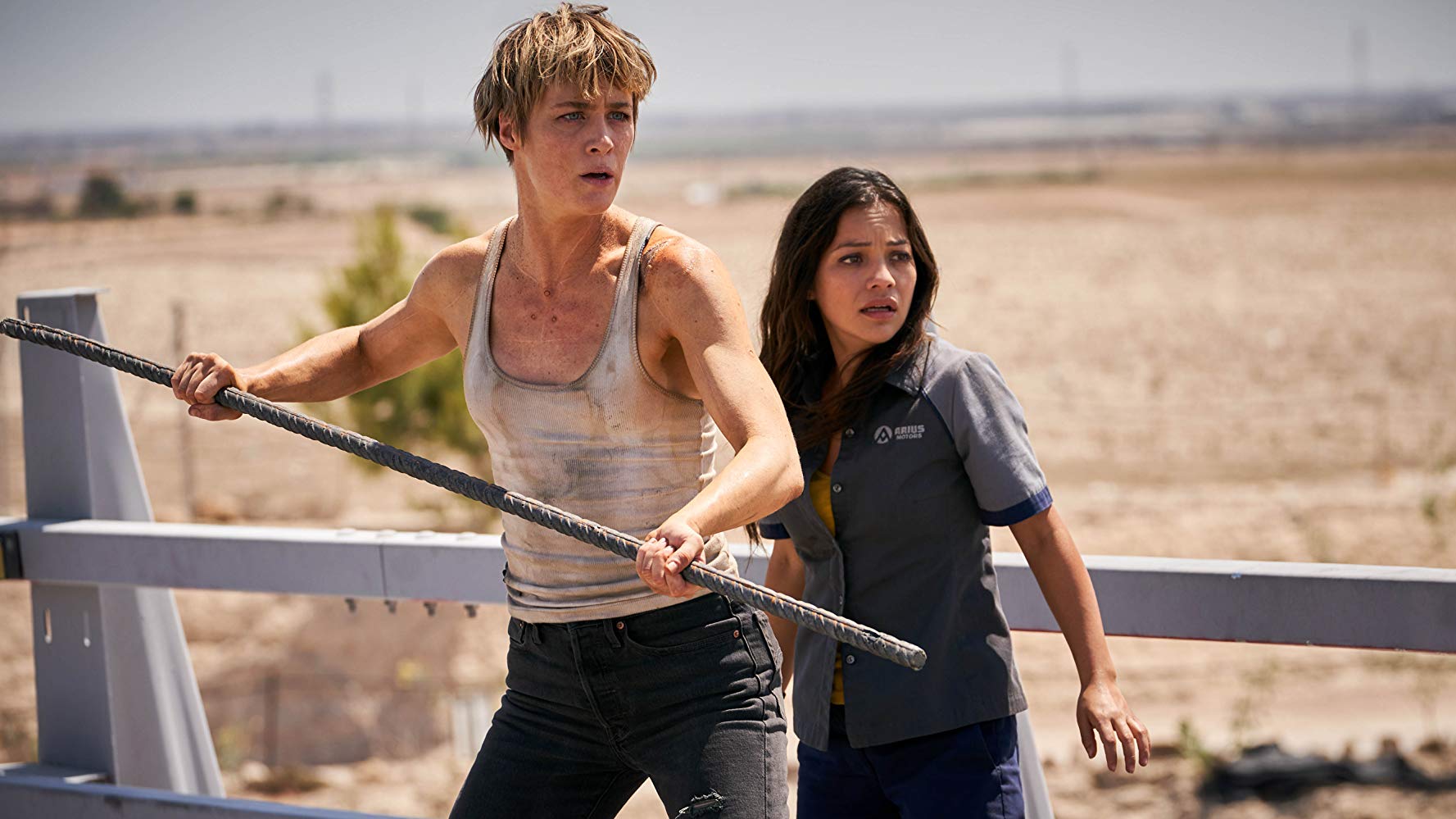 Directed by Tim Miller, Terminator: Dark Fate stars Linda Hamilton returning as Sarah Connor, now reluctantly helping a mysterious future warrior named Grace (Mackenzie Davis), sent back in time to protect Dani (Natalia Reyes) from a new Terminator called a Rev-9 (Gabriel Luna). Everything has changed, nothing is certain in this new timeline, and with their journey crossing paths with an aged T-800 Terminator (Arnold Schwarzenegger), the fight against a new dark future is bigger than ever.

The Terminator franchise is a weird beast. Everything after Terminator 2: Judgment Day has ran into the immovable wall of that sequel tying off all its own loose ends and closing out the stories of its most important characters. Whether its calling Judgment Day “inevitable” and rendering the previous films useless, showing what kind of man John Connor is in the future, weaving a new web of television stories only for it to be cancelled, or whatever the hell happened in Terminator: Genisys, none of them have managed to justify their own existence beyond blind curiosity. What Dark Fate has that sets itself apart is not only Linda Hamilton returning, but James Cameron on board as producer and co-writer of the story.

Don’t get me wrong, I’m not one to treat everything Cameron touches as the next great piece of film history (go check my review of Alita: Battle Angel on Dircksey or YouTube to see what I mean), but Terminator is his to control, no one else’s. With that said, where Dark Fate wants to go with its new and established characters and what it wants to say as another Terminator film feels better when you know that Cameron was there to help guide it along.

A disclaimed should be issued before showings of the film, warning fans of the first two films that the first 5 minutes will challenge what you think you know about Terminator characters, throwing you head first into dark, new territory, which I can understand if some resist and rail against it. I felt that instinct to clench up, avoid any message the movie will seek to speak as it goes along, and just reject its audacity as a cheap trick. But I didn’t. For some reason, I accepted this opening twist as something Cameron must have come up with to throw Sarah Connor back into the fight in a new, bold, and important way, far beyond previous attempts to do so. I instantly realised why Linda Hamilton, who refused to be in anything Terminator-related after T2, wanted to do this movie. Not only is it Sarah Connor’s story again, but her character is in the worst shape possible, thus it’s a perfect tabula rasa.

Hamilton is once again fantastic, getting all the best action one-liners, flaunted front-and-centre as the star of the whole thing and kicks all the ass in the process. If the trailers didn’t sell you enough, just know that her entrance in the film, older and battle-hardened, wielding super shotgun and rocket launcher in hand, Brad Fiedel’s thundering metal-on-metal theme kicking in, put a massive smile on my face and sent chills down my spine. Throughout Dark Fate Hamilton proves again and again that she was a missing link in the success of something after T2, because she was the best part of that monumental sequel.

Of course, Arnie is back, but with a better purpose of being here than ever before. Borrowing a small element from Genisys, Schwarzenegger is an aged Terminator, now with a secret mission that sets him far apart from his other lacklustre appearances since T2. His subplot of what he’s been doing over the last couple of decades and what it says about purpose and inherent humanity even in a machine not only was a direct James Cameron idea, but was something that completely sold me on what Dark Fate has to say about what a Terminator really is and what they are capable of doing beyond death.

Newcomers Natalia Reyes, Mackenzie Davis, and Gabriel Luna do well too, proving themselves worthy to stand next to the two returning heroes of the franchise and hold their own. Luna is the new Terminator here and cannot express himself beyond cold stares and mostly physical acting, which is difficult but he does it as well as Robert Patrick before him. What shines brightest is the energy and dedication that Davis and Reyes burst with onto the landscape of this movie. Not only are they believable as action heroes, but their developing connection with one another carried through each of the actresses’ performances felt meaningful in the end, something so necessary at the core of Terminator.

Director Tim Miller might have been the perfect choice to helm a Terminator movie, as he’s worked primarily in intense and bold visual effects work, making his debut with Deadpool, which required immense creativity to sell its world and main character on a lower budget for a superhero movie. What Miller brings here is that creativity and keen eye for how to effectively use visual effects without going overboard. Whole action sequences were designed by Miller himself to directly see where practical and CG were necessary, rather than easy. It may have been the contributing factor pushing Dark Fate to a huge $185 million budget, but having a director utilise the full tricks of his trade while still executing a different vision for this franchise means that it feels in good hands for perhaps the first time since T2.

Dark Fate is definitely not without problems. Beyond the opening twist which will be controversial amongst many fans I assure you, dear reader, this movie still suffers from flutters of generic territory, retreading plot points and motivations from previous films in the franchise, and when the action scenes come, as well as they are choreographed, they more than often lack the ordered chaos that still makes both The Terminator and T2 feel insanely visceral and immortal. I have seen these action sequences before, and a few quippy lines of dialogue, a few decent moments of MA15+ brutality, and some cool bits where that one guy did that thing with a gun aren’t always enough to save my attention span from waning.

What annoys me as well is that this is a different dark future our characters are facing, not Judgment Day. The poster makes that clear with the tagline “Welcome to the Day after Judgment Day”, but in the future that Grace and her cohorts are fighting, the Terminators, time travel technology, and new advanced computer system, now called Legion, are all sharing similar designs and traits to what came before. Initially I chalked this up to a message about the future always being bleak in this dark times we face today, however it became clear as the story wore on that it was similar to remind us the audience of what we like in the franchise and to be left vague enough to open the door to a sequel.

Terminator: Dark Fate can’t hold a candle to the brilliance of what James Cameron achieved before but, compared to its other false attempts at new stories in this franchise, it’s the first worthy Terminator 3. Some clunky dialogue, unresolved plot points, and an ever-present question of “haven’t we done this before?” are obvious problems, but thanks to winning performances from the new and returning cast, efficient direction, fascinating continuations of ideas from before, and an often touching story about purpose, this is a sequel that does work in spite of itself, and I feel ok with Terminator: Dark Fate being a continuation of the masterpieces that preceded it. 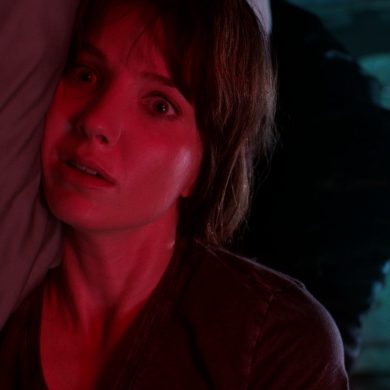