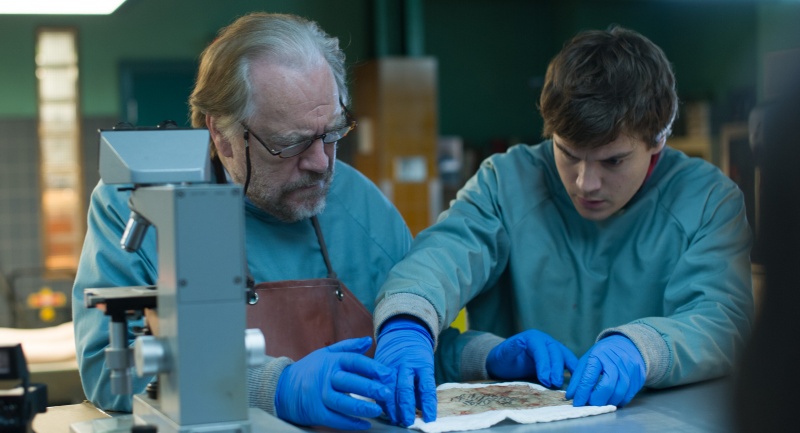 Body horror films of late have mostly fallen into the torture-porn/gorno arena, with films like the Saw series and of course, Hostel, making as much use of the vicious, aggressive violence inflicted upon victims as possible. But, what happens when a victim has died and there is no external wounds or trauma to signify why they have ceased to exist as a living being? Well, it’s then up to father and son coroners, Tommy and Austin Tilden – Brian Cox and Emile Hirsch respectively – to investigate in The Autopsy of Jane Doe.

Fresh off the recent Best International Film award win at Monster Fest in Melbourne, The Autopsy of Jane Doe also managed to wow audiences at Austin’s Fantastic Fest. One of the key discussion points of Norweigan director André Øvredal’s (Trollhunter) film was to not talk about what happens in it – just make sure you go and see it. So, with that attitude in mind, who is the sort of audience that should be seeking out this film, and specifically, why should they seek out a film that they will go in to knowing little about?

Given the exceptionally effective title that immediately provides chills and thoughts as to what exactly could happen, it’s understandable that you could go into The Autopsy of Jane Doe thinking that, finally mainstream America has jumped on board the August Underground/Guinea Pig films train and made a film that’s just about an autopsy. After all – years of CSI and Forensic Files has fueled the minds of many viewers, turning them into couch sleuths, keen to find out before the coroner does what exactly killed the victim on screen. And while the actual autopsy itself plays a major role of the story, there is so much more at work here to keep the tension humming along at a nice pace.

Of course, that tension wouldn’t be possible if it weren’t for three solid central performances. Brian Cox is typically great, and I challenge anyone to be able to utter the word ‘fuck’ better than he can. Emile Hirsch delivers a sturdy, effective performance – even if he is overshadowed by Cox at times. However, it’s the core performance of Jane Doe herself, portrayed as a stoic corpse by actress Olwen Catherine Kelly, who delivers a great performance. Sure, one could argue that all she has to do is lay there and be sliced and diced, but it’s the effectiveness of her ‘laying there’ that makes The Autopsy of Jane Doe work as well as it does.

Roman Osin’s cinematography periodically catches a static shot of the body as it provides a perfect reaction to what’s occurring at the time. Often I was convinced that there was a smile on her face, or a look of sorrow – even though there has been effectively no change to her face at all. The score, unfortunately, does undercut the tension in these moments a little bit too much, counteracting their intended purpose, and instead coming across more like it is telling the viewer how to feel, rather than informing the experience.

For those afraid of excessive or gratuitous gore, don’t be afraid – this is not an exploitative film at all. In fact, it’s quite the opposite. At times there is a meditative quality to the telling of this story of a mysterious corpse. What happens to us after we die? What stories do we tell after our light has been extinguished, and more importantly, what stories do our families or loved ones have to tell about us after we have gone? Granted, Ian B. Goldberg and Richard Naing’s script is more interested in telling an effective creepy story than anything too deep about the mechanics or gravity of death – but as Cox’s Tommy explains the process of someone’s death in an early autopsy, our bodies tell a greater story about who we are as people than we’ll ever know.

And what a story The Autopsy of Jane Doe is. After all the organs have been removed and the questions about how Jane Doe ended up the way she did are answered, you’ll want to immediately discuss it with someone else. This is a film that would be greatly elevated with a packed cinema, with everyone collectively enjoying and experiencing the twists and turns together. Follow it up with a late night discussion as to what happened, and you’ve got yourself the makings of a great horror film. 2016 has turned out to be a curious year for horror, with films like The Witch and Hush, and now The Autopsy of Jane Doe, challenging what horror cinema can deliver. Miss this at your peril.