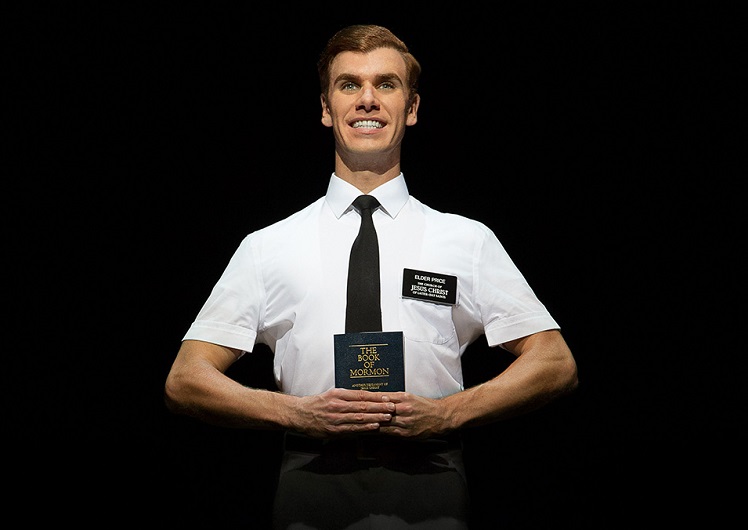 Musical theatre fans in Perth are used to patiently waiting their turn.

Two years after it was first performed in Sydney and eight years since it first appeared on Broadway, The Book of Mormon finally rings the doorbell of Perth’s Crown Theatre and we are all ready to hear the good news.

It’s always a tricky business recommending musicals to people, especially those who might not be so partial to the medium, which is known to divide crowds and critics alike. The Book of Mormon however might just be the one that bridges the gap between the musical enthusiast and the reluctant friend who just “can’t stand it when they burst into song”.

This crossover however does not mean any of the quality or essential components arecompromised. On the contrary, it retains all the camp, all the talent and all the show tunes in bucket loads but with the added vigour of its brilliant humour and outstanding originality.

The story features two hopeful young Mormons who are sent to Uganda as missionaries from their church in Salt Lake City. They soon learn that the two places are very, very different and that the world is not as just and pretty as Utah. The town is ran by a Kony-esque gang leader who threatens genital mutilation on women and murder on everyone else who dares cross them. AIDS is rampant and life just generally, unpleasant. The young Mormon’s faith is challenged along the way as they seek to convert the Ugandians to join the church.

Despite all this; much comedy ensues.

Fans of Trey Parker, Matt Stone and Robert Lopez will already be aware of their writing capabilities. Parallels between The Book of Mormon and South Park are impossible to ignore, in the best way possible. For those who appreciate the show it’s such a fantastic showcase of the musical and comedic talent these writers have, transcribed and delivered through the rawest form of entertainment without losing any of the laughs or key messages.

Their cultural observations are ever present as The Book of Mormon’s impressive set designs and costumes cleverly pin a stark visual identity on modern religion. The rise of the likes of Mormonism and Scientology have created a new era of religious uniform and places of worship. One might have expected The Book of Mormon to be an all out anti-religious attack (because let’s face it, they have the grounds to do so) but it isn’t. It’s almost friendly atheism, presented with observational wit as opposed to outright mockery.

Blood Feast Review – An Ode to Herschell Gordon Lewis, the Godfather of Gore

The humour that is so perfectly balanced with vulgarity and wit is relentless and a huge part of what makes this musical so unique. You have the physical element, founded on exquisite timing and delivery mixed with the bawdy and grotesque All topped off with sequin jacket clad sexually repressed Mormons tap dancing and singing a barrage of catchy show tunes – it’s just fabulous.

It’s a musical that is genuinely era and genre defining. I don’t want to be so cliché as to call it Shakespeare standard, but it’s the kind of performance that helps you understand the level of impact those plays would have had at the time.

I also think it’s important to note that it’s nothing to do with political correctness gone mad or actually much to do with politics at all. Parker and Stone themselves make the point that we all believe things that others consider ridiculous. It’s about having the humility to share the dialogue and laugh at each other, to laugh at ourselves. There’s no hidden agendas or point to prove, just tremendous writing and creativity that fits perfectly into our already hilariously satirical world.

Purchase tickets for The Book of Mormon here.